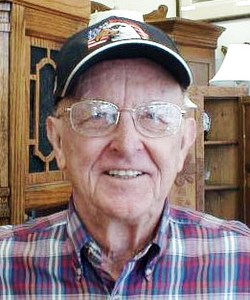 Graveside Services for Dan Dusek, 89, of Tyler, will be 2 p.m. Saturday, August 28, 2021 at Rose Hill Cemetery, Tyler with a visitation one hour prior at the cemetery. Dan passed away on Wednesday, August 25, 2021 at Trinity Mother Frances.

Dan Dusek was born March 28, 1932 in Caldwell, Texas to Frank V. and Rosie Trcalek Dusek. He graduated from Caldwell High School in 1951 and Sam Houston State University in 1955. He received his U.S. Army commission upon graduation and married Marie Todd Dusek on October 29, 1955. Dan served two years active duty with a tour in Germany with the 86th Infantry Division and 19 years in the Army Reserve retiring as a Major.

He worked for many years for Lincoln National Life Insurance Company and then as an independent agent. Dan was a past president of the Tyler Jaycees and a member of the Tyler Rotary Club. In his later years, he and Marie owned and operated Country Bear Antiques, selling in many different venues and conducting estate sales. Dan was an Elder Emeritus at First Christian Church, Tyler.

He was preceded in death by his parents; and brothers, Theodore Dusek and Jerry Dusek.

Survivors include his wife of 65 years, Marie Todd Dusek of Tyler; a son and daughter-in-law, Dennis and Missy Dusek of Cartwright, Oklahoma; a daughter, Debbie Holman of Plano, Texas; a son-in-law, Tony Holman of Plano; an aunt, Marie Trcalek of Caldwell; four grandchildren, Maggie Holman of Austin, Taryn McDonald and husband Drew of Dallas, Devin Dusek of Plano, Texas and Ryan Dusek of Allen, Texas; three great-grandchildren, and numerous nieces, nephews, and cousins.

Special thanks to Mike Gaffney and Tiffany Brooks for their support.

If desired, memorials may be made to the Alzheimer's Alliance of Smith County, the Salvation Army, or Hospice of East Texas.

Leave condolences on line at www.burkswalkertippit.com

Published by The Bryan-College Station Eagle on Aug. 27, 2021.
To plant trees in memory, please visit our Sympathy Store.
MEMORIAL EVENTS
Aug
28
Visitation
1:00p.m.
Rose Hill Cemetery
Tyler, TX
Aug
28
Graveside service
2:00p.m.
Rose Hill Cemetery
Tyler, TX
Funeral services provided by:
Burks-Walker-Tippit Funeral Directors
MAKE A DONATION
MEMORIES & CONDOLENCES
Sponsored by Burks-Walker-Tippit Funeral Directors.
7 Entries
Dan was such a sweet person. I remember going to the family reunions and he was always quiet. But when he did talk you better listen because he had something important to say. I will miss him as I know all his family will. Please know that our thoughts and prayers are with you at this difficult time. So sorry we couldn't make it.. Love to all of you.

Vicki, Irven, Austin, Susanna, Georgia, Tyler, Travis and Carson
Vicki La Peyre King
Family
August 30, 2021
Dan was a kind, cheerful, gentle, and loving person. I have always enjoyed visiting with him and Marie when I come to Tyler and I'm going to miss those visits. Love to all the family--Peanut
Ellen Grett
Family
August 27, 2021
May God bless you and your family in this time of sorrow. We were Blessed to have known him. He is now with Jesus and we are so happy about that.
John & Connie McCall
Family
August 27, 2021
Grief can be so hard, but our special memories help us cope. Remembering you and your loved one today and always.
Kurt Hunt
Acquaintance
August 27, 2021
I didn’t know Mr. Dusek, but I do know his children Dennis and Debbie, and grandchildren Taryn, Devon, Ryan, and Maggie. All are such wonderful, giving people who care deeply and give back. Dan and Marie set a great example. Well done, Mr. Dusek. Rest In Peace.
Jamie Baer
Friend
August 27, 2021
Dan was my first cousin. We both grew up on farms adjacent to each other. Needless to say we spent our complete childhood together. We attended the same schools till graduation. Dan was 3 years older than I and he attended college and I joined the Air Force for a 20 year + stint. We sort of lost track after that and remained till his death. The years of great old memories will remain with me forever. The things we did in early childhood could never be repeated at this day and age. RIP Dan.
David Sefcik
Family
August 26, 2021
Jeff Lowe
August 26, 2021
Showing 1 - 7 of 7 results