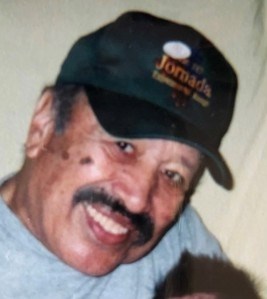 Daniel Portales, Sr. passed away peacefully in his sleep on November 22, 2021. He was born in Franklin, Texas to Domingo Portales (birth name Manuel Hernandez) and Delfina Marquez Narvayez Portales on July 20th, 1924.

Daniel was hired in 1940 by Texas A&M to feed Aggies at Sbisa Dining Hall. He loved his work, the staff, and the students for 42 years.

He bought a house in 1960. His mother said, "If my little bird is building a nest, he must be in search of a wife." Momma was right. From the loading dock of Sbisa, Daniel had spotted another A&M employee, Domitila Orozco, who worked across the street. Soon thereafter while attending a wedding, he was introduced to Domitila by Tano Martinez, his good friend from Sbisa who also happened to be her cousin. In 1961, Daniel married Domitila. They had three children, to whom they gave unconditional love.

His only surviving sibling is Ray Portales (Barbara Meschwitz).

Daniel touched many lives. He was a longtime parishioner at Santa Teresa Catholic Church in Bryan.

He and his wife babysat more than four dozen children - over three generations in one case - to whom they were affectionately known as "Mama Tila" and "Daddy Dan". Those children, now men, will serve as his pallbearers.

Well known for his pico de gallo and chicken molé, Daniel was a quiet man, who loved to tell stories of his observations with humor and love.

The funeral Mass will be celebrated at 11:00 am, Tuesday, November 30 at Santa Teresa Catholic Church, 1212 Lucky Street, Bryan. Committal will follow at Mt. Calvary Catholic Cemetery in Bryan.

The family thanks Traditions Hospice for their superb service, advice, and support over the last several months. Instead of sending flowers, the family requests donations in Daniel's name to Brazos Valley Food Bank at bvfb.org.

Published by The Bryan-College Station Eagle on Nov. 26, 2021.
To plant trees in memory, please visit the Sympathy Store.
MEMORIAL EVENTS
Nov
29
Visitation
5:00p.m. - 7:00p.m.
Memorial Funeral Chapel College Station
2901 Texas Ave South, College Station, TX
Nov
29
Service
7:00p.m.
Memorial Funeral Chapel College Station
2901 Texas Ave South, College Station, TX
Nov
30
Funeral Mass
11:00a.m.
Santa Teresa Catholic Church
1212 Lucky Street, Bryan, TX
Funeral services provided by:
Memorial Funeral Chapel College Station
MAKE A DONATION
MEMORIES & CONDOLENCES
Sponsored by Memorial Funeral Chapel College Station.
11 Entries
My Thoughts and Prayers are with the family
Richard Garcia
Friend
November 30, 2021
A very respectful man, a servant of the Lord, he enjoyed helping in St. Teresa gift shop & friendly with a kind heart , he will be missed, R.I.P.
Mary & Jesse DeLaCruz
November 30, 2021
Portales Family: On behalf of our Martinez Family, we were SO Sadden to hear of Mr Portales. Since we lived on same street Fairview, my memory of him was that growing up he would walk every day in front of our home. Always saying `hello´ with a Smile. May God give y´all lots of Strength & Comfort. SusieVelasco/Roy, Robert, Richard Martinez/Victoria Nichols/SallyDiaz/Velasco Families
Sally M Diaz
Friend
November 29, 2021
Tila, prima, and family, de parte de la familia de Margarito y Lucinda Orozco los acompaño en sus sentimientos. We are under the weather and it would not be safe for us to be around you. Know that we love you as always and have a special place in our hearts for all of you. We will pray the rosary here at home. Lucinda
Lucinda Orozco Murphy
November 29, 2021
Josie, My condolences to you and your family. May your dad rest in peace.
Theresa Davis
Other
November 29, 2021
Josie, I am so sorry to hear about your Dad. My thoughts and prayers to you and your family during this difficult time.
Rhonda Korger
November 29, 2021
Our condolences to the family. Mr Portales was a wonderful man. He always had a smile on his face and was one of the nicest man we knew.
Lionel and Alicr Garcia
Friend
November 28, 2021
So sorry for your loss. Daniel was my supervisor while I worked at SBISA as a high school kid. On my first day at work I recall having a bad day. Daniel was the reason I returned the next day. He put his hand on my shoulder and told me tomorrow will be a better day. I never forgot that encouragement from him. He was always very nice and respectful to everyone.
Johnny Martinez
November 28, 2021
Deepest Condolences and Prayers too the Families May he Rest in Peace
Patti Galvez
Friend
November 26, 2021
Josie, so sorry for your loss. May God comfort you and your family during this time of sorrow.
Martha Snodgrass
November 26, 2021
It was an honor working with Daniel Portales at Sbisa when I was in school he was a great person always smiling, I know he will be missed rest in peace my friend your in Gods hands.
Reynaldo Villalpando
Friend
November 26, 2021
Showing 1 - 11 of 11 results