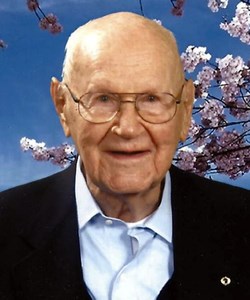 Edward Kozlowski died peacefully in his sleep in Chevy Chase, Maryland on November 5, 2020.

Ed Kozlowski was born in Chicago, Illinois on January 12, 1921. As a boy, he moved to Wisconsin living on small farms, the last one in Necedah, where he finished high school in 1939 as a scholar-athlete. After high school, Ed played Class A Baseball for a year before he was admitted to the United States Military Academy at West Point. From there, he was drafted into the Army AirCorps and became a pathfinder navigator in Europe during World War II. He was the last surviving pathfinder navigator of the D-Day Invasion, leading the second wing of planes and flying four roundtrips over Normandy that day. In war, he survived his planes being shot down over enemy territory and the North Sea.

After the war, he returned home to Wisconsin and attended Marquette University, majoring in Mechanical Engineering. In 1947, Ed married the love of his life, Yolanda Frisch, an army nurse he met in England, just after D-Day. They moved to Ohio, where he completed a second degree in electrical engineering and worked for several industrial firms, including Sherwin-Williams, for which he was awarded patents. He also worked for aerospace contractor TRW, where he helped design heat shields for reentry spacecraft in the Gemini and Apollo programs. Later, he was assistant director of the Johnson Space Center physical plant (Houston). He concluded his career as associate physical plant director at Texas A & M University, Prairie View A & M and TAMU Galveston. Ed was an active member of the Bryan-College Station Lions Cluband the American Legion for many years.

He is survived by his daughter, Judith, son-in-law Arthur Perry, and granddaughters, Diana and Christina, the lights of his life. His beloved wife, Yolanda, predeceased him in 2014. Services at Arlington Cemetery will be held jointly with his wife at a later date.

To plant trees in memory, please visit our Sympathy Store.
Published by The Bryan-College Station Eagle on Nov. 22, 2020.
MEMORIAL EVENTS
No memorial events are currently scheduled.
To offer your sympathy during this difficult time, you can now have memorial trees planted in a National Forest in memory of your loved one.
Funeral services provided by:
Pumphrey's Bethesda-Chevy Chase Funeral Home
GUEST BOOK
1 Entry
Jill and my best wishes are with you Judith and Artie. Judith, your father was an extraordinary human being and although this is a difficult time, it is also a time to remember and celebrate. We are thinking of you at this time of Thanksgiving and giving thanks for his life.
Roger and Jill Crafts
Friend
November 27, 2020