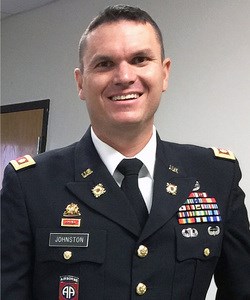 Lieutenant Colonel James Roger Johnston went home to Jesus on August 22, 2020 at age 43 while serving in the U.S. Army oversees on assignment to NATO.

James was born on June 24, 1977 in Albuquerque, NM. After graduating in 1995 with honors from Judson High School in Converse, Texas, he attended Texas Tech University where he found his passions in life: his future wife, Lori McMillan and service to the US Army. Upon graduation and completion of the Tech ROTC program, he received his commission as a Second Lieutenant on December 18th, 2000. Lori and James married on December 22nd, 2000 at First Baptist Church in Plainview, Texas and they went on to have two daughters, Rileigh Faith (15yrs), and Madeline Grace (13yrs).

James' first assignment was Ft. Lewis in Washington State where decades earlier his grandfather had gone for Basic Training before serving in WWII, a connection that they both would treasure. James was proud to have served 5 Tours of Duty in Iraq (2), Afghanistan, Haiti, and Kuwait and serve as an instructor at the Desert War College at Fort Irwin, CA. He also served with the 82nd Airborne at Ft Bragg, 8th Transportation Brigade at Ft Eustis, held a company command at Ft. Story within the 11th Transportation Battalion and 1st TSC at Ft Knox. His last posting was his dream position an assignment to NATO starting with the NATO Defense College in Rome, Italy in which he was thrilled to bring his family on what he called an "adventure of a lifetime".

In addition to being a dedicated and loving family man, James also loved riding his Harley, traveling, cooking, and star gazing. Throughout his life, he held an ever-strengthening faith in God, which he shared with those who surrounded him.

There will be a funeral service held at 3:00pm, September 19, 2020 at First Baptist Church (Kornerstone Funeral Home) in Plainview, Texas and streaming services will also be available at https://firstplainview.com/media or https://www.facebook.com/firstplainview.

"You will seek me and find me when you seek me with all your heart." Jeremiah 29:13

Doug Walters (CW4 Retired)
Doug Walters
September 19, 2020
Earth has lost an amazing soul but in his short life has been an inspiration to all who were fortunate to know him. Our family never met him, but are grateful for his service to our country and to the Lord. May his family find comfort and peace, knowing their loved one is in the presence of Jesus.

Sincerely in Him,
Betty Chavana
Chavana/Barker Family
Friend
September 19, 2020
Truly a great man departed this world too soon! Debbie and I send our prayers for strength to his family.
Marde Stephens (Retired CSM)
Military
September 18, 2020