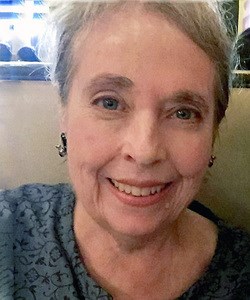 Jean Smith Cherry was born April 9, 1944, in Rosenberg, Texas, daughter of Omar and Elouise Smith. She passed away on September 14, 2020, in Dallas, Texas. Private family services will take place in College Station.

Jeanne spent a joyful childhood at her home in Bryan, Texas with her parents and two younger brothers, Terry and Don. An outstanding student and avid reader, she excelled in music and performed in many Stephen F. Austin High School musicals. And with her father as coach for Texas A&M tennis, she grew up surrounded by the world of Aggie athletics.

She attended Southern Methodist University in Dallas, majoring in English and Music Performance. Singing with the University Choir under Lloyd Pfautsch, she performed in several concert tours of the US and Europe. After graduating SMU, Jeanne taught elementary and high school in Dallas and, for a year, in Switzerland. In 1974, she became a travel agent, arranging fascinating vacations and tours and, as an agent, visiting cities and regions here and in Europe. Meanwhile, she continued singing with the SMU Perkins Chancel Choir as well as performing choral masterworks with the Dallas Civic Chorus.

In 1976, Jeanne joined the SMU Meadows School of the Arts as Director of Graduate Records, where she served until 2010. During this time, the Meadows School expanded significantly, so that, through the years, Jeanne helped many hundreds of talented national and international artists gain graduate degrees in music, dance, theater, painting and sculpture, and broadcast media. Also, in 1974 Jeanne married Tom Cherry, and together in 1986 they welcomed their beautiful daughter Eva.

Jeanne lived life with a special appreciation and freedom. She was an intrepid traveler from her youth. As an adult she explored North and South America, Britain and Europe, the Middle East, and once even shared Christmas Eve with a Bedouin family outside of Bethlehem. She voraciously read English mysteries, usually figuring out fairly well in advance 'who done it'. She lived in Cambridge for a year, singing in St. Mary's Church choir. She had High Tea at No. 10 Downing Street. Prince Charles was studying at Cambridge University while she lived there. While walking the steps into a concert hall, the future king of England actually spoke to her saying, "Good evening."

Jeanne's was a life of curiosity and discovery, delight in the colors and calls of birds, in flowers and trees and cats, in kings and queens, language and legend. She lived her life as blessed, and all who knew her felt blessed.

Jean Smith Cherry was preceded in death by her parents, Omar and Elouise Beard Smith; and her brother, Terry Omar Smith. She will be deeply missed by her daughter, Eva Beverly Cherry; and her brother, Don Alan Smith.

In lieu of flowers, donations may be sent to Lakewood United Methodist Church in Dallas.

To plant trees in memory, please visit our Sympathy Store.
Published by The Bryan-College Station Eagle on Sep. 20, 2020.
MEMORIAL EVENTS
No memorial events are currently scheduled.
To offer your sympathy during this difficult time, you can now have memorial trees planted in a National Forest in memory of your loved one.
Funeral services provided by:
Restland Funeral Home and Cemetery
GUEST BOOK
0 Entries
Be the first to post a memory or condolences.