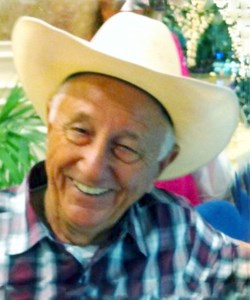 LW was born on July 28, 1933 to Fred and Edna (Benn) Brinkman in the community of Birdsong in Burleson County. He attended the Birdsong School until it closed and then transferred to the school in Deanville. He joined the United States Army during 1954 and was stationed at Ft. Polk in Louisiana.

LW married Earlene Ripple and they had one son Douglas William Brinkman, and one daughter Belinda Susan Brinkman. After the service LW returned and lived the dream of country life in the Burleson County area. He owned and operated an auto service station in Somerville, was a commercial truck driver for many years and known as a successful rancher/farmer all of his life. He loved being outdoors and working with the land and cattle as well as raising and taking care of horses. One pastime he had was watching a football or baseball game when he could take a break and relax. He never met a stranger and was well liked by everyone who knew him, just a good ole cowboy and friend!

LW was a proud and loving husband to wife, Ona Carol, throughout their over 42 years of marriage since 1979. He has been a lifelong Lutheran and a member of St. John's Lutheran Church in Deanville.

Published by The Bryan-College Station Eagle from Sep. 17 to Sep. 18, 2021.
To plant trees in memory, please visit the Sympathy Store.
MEMORIAL EVENTS
Sep
18
Visitation
5:00p.m. - 8:00p.m.
Chapel of Phillips & Luckey Funeral Home
Caldwell, TX
Sep
19
Funeral service
1:00p.m.
St. John's Lutheran church
Deanville, TX
Funeral services provided by:
Phillips & Luckey Funeral Home - Caldwell
MAKE A DONATION
MEMORIES & CONDOLENCES
Sponsored by Phillips & Luckey Funeral Home - Caldwell Caldwell.
4 Entries
L.W. was a good man and good friend. I know he will be missed, deepest sympathy to Carol, Douglas and family
Emmitt Wolz
Friend
September 19, 2021
Grief can be so hard, but our special memories help us cope. Remembering you and your loved one today and always.
John & Shirley Sodolak
Friend
September 17, 2021
Condolences, from the only girl in Leonard´s Confirmation Class of the late 40´s...
LaVerne Eberhardt Pivonka
Family
September 16, 2021
The the family of Leonard Brinkman we offer our love & sympathy of the loss of your loved one. We were longtime friends in our younger days and had many good times. May you all rest in the peace of Jesus our Lord & Savior.
Georgia & Leonard Fritsche
Friend
September 15, 2021
Showing 1 - 4 of 4 results