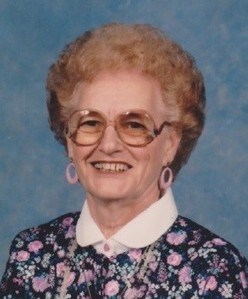 Lydia Edith Fojtik Luza beloved wife, mother, daughter, sister, aunt and grandmother passed away peacefully on January 8, 2021 at the age of 94. Visitation will be on Tuesday, January 12, 2021 from 5 – 7 pm with the rosary being said at 7:00 pm at Memorial Funeral Chapel in Bryan. A Mass of Christian Burial at St. Joseph's Catholic Church on Wednesday, January 13, 2021 will be begin at 10:00 am. Msgr. John McCaffrey will officiate and entombment will follow at Mt. Calvary Cemetery Mausoleum.

Lit was born on March 9, 1926 at home in West, McLennan Co., Texas. Her parents were Emil and Edith Brinkmann Fojtik and she was the sixth of nine children. They were a farming family, descended from Czech and German immigrants. For the Fojtiks, family and friends were always a priority. Emil Fojtik and his brother-in-law, Gus Brinkmann, opened a gas station and auto garage in West. During the Great Depression, they extended credit to friends and neighbors who needed their vehicles to eke out a living. That practice led to bankruptcy, shuttering the business for good. Emil Fojtik knew the business would fail because of the credit but they were trying to help others as everyone was in the same situation. Lydia was always ready to help others - that's how she was raised and that is how she lived her life.

Lydia loved school and rarely missed a day. She was an avid reader. She attended high school in Franklin, Texas where one of her sons' years later would serve as principal at the school.

Lydia met her future husband, Charles Luza, March 26, 1940 at her sister's wedding and they were married on January 8, 1946 at St. Joseph's Catholic Church. On the night before their wedding, an excited Lit accidentally burned a hole in her dress while ironing it. Her sister-in-law had some parachute silk which matched the dress so Lit stayed up most of the night repairing the dress. The stress and fatigue caught up with her the next day; she fainted at the altar. Their wedding reception was held at Shiloh Hall in College Station. It rained all day long and everything was muddy. Charlie and his groomsmen helped pull cars from the mud so everyone could get inside for the meal and dance.

In 1950, they bought a farm in Dime Box, Texas and moved the family there. Lydia and Charlie farmed the land and in 1954, returned to Bryan where they remained. Charlie worked at Bryan Air Base until it closed and then was employed at Texas A&M in the Facilities Department. Lydia worked at Parker-Astin, Inc. for many years and in 1972 began her career as a Technician in the Department of Entomology at Texas A&M University. As her children grew, moved out and married, their house on North Ave. in Bryan became a hub for the extended family. The whole family would gather there every weekend and especially on holidays, where the growing Luza clan had to exchange Christmas presents in shifts because of cramped conditions. One year her son, Charles, suggested the family get together at Easter to celebrate. That tradition has continued to this day.

Lydia was an avid believer in daily exercise and led an exercise group for many years. She enjoyed line-dancing and incorporated that into her exercise routines. Lydia was a life-long member of St. Joseph's Catholic Church where she participated as a Eucharist Minister and led the Rosary before Mass. She often attended daily Mass. She was a member of the Mt. Carmel Rosary Guild, Age Managers, Gold Medallion Club, and St. Joseph's Women's Guild. Traveling was a passion and she enjoyed many trips throughout the US. She was a volunteer in the parish gift shop for many years. She was a member of St. Joseph School Mother's Club during the years her seven children attended school there. She enjoyed monthly luncheons with a group of close friends. She liked genealogy and visited many cemeteries to get answers before the internet was available. Lydia and Charlie enjoyed their Czech heritage and loved dancing and other traditions.

After her retirement in August 1985, she was very involved in her grandchildren's lives and they adored her. Lydia enjoyed spending time with her children, and grandchildren (great), and was proud of them all. We never heard our mother speak of any regrets over her lifetime. She seemed to face each day as if it were her best. In October, Charlie suffered a stroke and Lit became his caregiver. They celebrated 45 years of marriage before his death on September 1, 1991.

Still her resilient nature wouldn't allow her to become bitter or afraid as age brought more physical discomfort. Her strong faith in God and genuine concern for others kept her focus on enjoying life. Even as dementia caused great frustration for her at times, she remained sweet natured and joked with caregivers. One of her favorite sayings when she was telling someone goodbye was, "Be good to yourself"!

The family wishes to thank the kind nurses and staff at Crestview for the great care they have given our mother since 2014. Mother often commented on how well she was treated there.

In lieu of flowers, memorials are suggested to St. Joseph School, Brazos Valley Hospice or a charity of your choice.

To plant trees in memory, please visit our Sympathy Store.
Published by The Bryan-College Station Eagle on Jan. 10, 2021.
MEMORIAL EVENTS
Jan
12
Visitation
5:00p.m. - 7:00p.m.
Memorial Funeral Chapel
1515 South College Ave, Bryan, TX 77801
Jan
12
Rosary
7:00p.m.
Memorial Funeral Chapel
1515 South College Ave, Bryan, TX 77801
Jan
13
Mass of Christian Burial
10:00a.m.
St. Joseph's Catholic Church
Funeral services provided by:
Memorial Funeral Chapel
GUEST BOOK
10 Entries
Prayers for you and your family in this time of sorrow. I met Lydia at Crestview, as I am a volunteer. She was so sweet. Keep those precious memories and know that she is in a better place.
Lana McLennan
January 14, 2021
Aunt Lit brought such joy and laughter to everyone she was around and she will be sorely missed. I babysat her younger kids one summer and I often spent the night there instead of driving back to Wheelock. It was one of my favorite summers, mostly because of the bond we formed, which lasted throughout my lifetime. We stayed up til all hours laughing and telling stories. She was always so much fun and had such a zest for life! I cherish all my memories of her but fondest of all was the sense that each of us were sure we were her favorite!
Debbi Hoehn
January 13, 2021
So sorry to have read that Lydia passed away. She was an amazing lady who lived life to the fullest. I actually had the pleasure of working with her at Parker-Astin during one of my summer jobs when I was a teenager only to find out that we would be related through marriage one day. She always stayed very busy which led to her longevity. My thoughts & prayers to the family. May the Holy Spirit be upon each of you. God Bless all
Ann Reina Putz
January 11, 2021
I did not know your mom, but most likely had met her at Parker Astin at some time. The obituary was so interesting and sweet. She sounded like a wonderful lady who I imagine had a great many friends who loved her along with all of the family. My sincere condolences.
Pat Supak
January 11, 2021
God Bless.
Doug and Denise
January 11, 2021
It was a pleasure serving Mrs. Luza during my time at Crestview she was a devoted Catholic always ready to say the Rosary and attend the Catholic service. Always wanted her hair and nails to look pretty. She enjoyed her time during exercise and every activity we had. It hurt me during this time of the Covid because I wasn´t able to continue coming to volunteer after my retirement. I loved this lady and I know heaven got a special angel. May she RIP
Alice Mendez
January 10, 2021
With sympathy and prayers. What a magnificent legacy this amazing lady leaves. This community and the world are better for having her here with us!
Nina "Mike" Randermann Ludington
January 10, 2021
To say aunt Lit was a great person just doesn´t seem like it´s enough. I could always depend on her to have a smile....even smiled while talking. She was always incredibly kind and loving. I have fond memories of both her and uncle Charlie. I remember she was so good to my momma and daddy. (JD and Gladys Fojtik) My God how they loved her...we all loved her. May she rest Love to the family, Carol
Carol Fojtik Barnett and family
January 10, 2021
Know that all of you are in my thoughts and prayers in this time of sorrow. We loved Aunt Lit very much. Love, Connie and family
Connie Fojtik Nettuno
January 10, 2021
So sorry for y´all´s loss but at least she will be busy with Uncle Charlie and visiting all our ancestors having a blast
ElizabethFlint
January 9, 2021