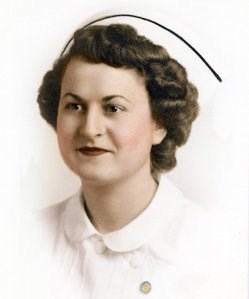 Margie Ann Halsey Jensen, 88, formerly of College Station, Texas passed away September 4, 2020 in Tyler, Texas. Margie was born on February 9, 1932 to Armond D. and Maude P. Halsey near Tyndall, South Dakota. She was the second of five children born to this union and was baptized at the Congregational Church in Springfield, South Dakota.

Margie graduated from Avon High School in Avon, South Dakota in 1949 where she was active in band, drama and choir. After graduation, she earned a teaching certificate from Springfield Normal College and taught for a year in a one-room rural schoolhouse south of Avon. She then enrolled at the Sacred Heart Hospital School of Nursing in Yankton, South Dakota graduating as a Registered Nurse in 1953. She then enjoyed a life-long career helping others at clinics and hospitals in several states.

Margie married Ray E. Jensen in 1955 in the Congregational Church in Springfield. Together they raised four children and resided in several states including North and South Dakota, Georgia, Kansas, Iowa, Alabama and Texas. She settled in College Station, Texas in 1975 and was a long-time resident until moving closer to her daughter in Tyler, Texas in 2014.

Margie enjoyed playing the piano, singing and was an excellent country and western dancer. She was a devoted mother who rarely missed a band or choir concert or a sporting event in which her children participated. Her primary hobby in retirement was spoiling her feline companions.

She was preceded in death by her parents; brothers, Neil Halsey and Tom Halsey; sister, Bettie Merkwan; niece, Lori Halsey; and her aunts and uncles.

A memorial service will be held at a later date in Springfield, South Dakota and will be announced as plans are finalized.

To plant trees in memory, please visit our Sympathy Store.
Published by The Bryan-College Station Eagle on Sep. 20, 2020.
MEMORIAL EVENTS
No memorial events are currently scheduled.
To offer your sympathy during this difficult time, you can now have memorial trees planted in a National Forest in memory of your loved one.
Funeral services provided by:
Boren-Conner Funeral Home
GUEST BOOK
0 Entries
Be the first to post a memory or condolences.