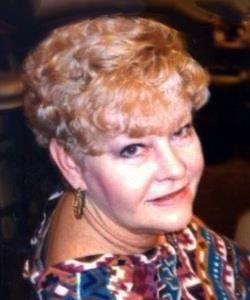 Early Sunday morning, September 20, 2020, Patricia Ann Scanlin, loving wife and mother of four, passed away at the age of 75.

Patricia was born on April 25, 1945 to Sherman and Lucille Kyles in Laredo, Texas where her dad was stationed at the time. She grew up in Houston where she graduated from Jesse Jones High in 1963. Patricia had always dreamed of being a model or an airline stewardess, but ultimately decided to become a beautician. After finishing beauty school, she moved to Bryan, Tx. Shortly after moving to Bryan, she met her husband Joe Scanlin at Celebrity Lanes during a bowling league.

Joe E. Scanlin and Patricia Kyles were married on June 1, 1967. They raised four children, Frank, Gina, Joseph, and Angela. In 1975 Patricia opened the "Something Else Hair Salon" at the Towneshire Shopping Center in Bryan. After over 30 years of cutting hair, Patricia decided to hang it up and begin a new venture. She then went to work for BISD as a bus driver, where she later retired.

Patricia had a passion for reading, dancing, cooking, and bowling. She was the best listener and her counsel was well received by so many. Everyone who knew Pat loved her.

Patricia was preceded in death by her mother and father, Sherman and Lucille Kyles of Houston. Her 2 brothers, Jimmy and Sherman Lynn Kyles. She is survived by her husband, Joe E. Scanlin of Bryan, her children, Frank and Trish Scanlin of Navasota, Gina Scanlin and Connie Jimenez of Bryan, Joseph and Mireya Scanlin of Bryan and Angela and Randy Wymola of Anderson. Patricia had eleven grandchildren: William Scanlin, Ryan Scanlin, Brittney Scanlin, Kyle Wymola, Becka Scanlin, David Scanlin, Taylor Wymola, Andrew Wymola, Brittany Turner, Christopher Howard, and Aidan Howard. She is survived also by sister-in-laws, Suzanne Kyles of Henderson, NV, Joann Scanlin Haas of Bryan, and Theresa Scanlin Walker of College Station as well as many nieces and nephews.