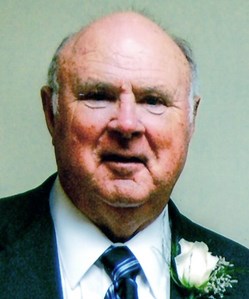 A Paris, Texas native, Dick was born at home on February 2, 1934 to Paul and Mary Crawford. His childhood in Paris and Forest Chapel included adventures around bird dogs, fishing, horseback rides to school, and runaway tractors. Dick attended Paris High School and graduated in 1951. As Class President he enjoyed participating in the many Class of '51 reunions over the years.

He enrolled in Texas A&M College that Fall with plans to study Agriculture but found his calling in Veterinary Medicine. Ultimately deciding to pursue a career as a teaching veterinarian, Dick received his Doctor of Veterinary Medicine in 1957 and joined the faculty at Auburn University in Auburn, Alabama. That same year he married his sweetheart, fellow Paris native Eleanor Trigg Jones, his sister's best friend. Together they started a journey that would take their family to 5 universities in 5 different states.

Dick received his Master of Science in Public Health from Auburn University in 1961, and his Ph.D. from the University of Minnesota in 1964. He taught at the University of Iowa Medical School from 1965 until 1970, specializing in diseases communicable between animals and man. In 1970 the family moved to Pullman, Washington where Dick joined the faculty at Washington State University. Although he thoroughly enjoyed the outdoor lifestyle of the Pacific Northwest, Dick returned to Texas in 1972 and joined the Texas A&M University Vet School Department of Public Health. For the next 23 years Dick taught, led a major cattle research project, chaired an international symposium, and shared his expertise with veterinarians from around the world who came to College Station to train under him. He was a member of the A&M Faculty Senate, and a member of the Vet School Selection Committee. He retired in 1995 as professor emeritus, and he and wife Trigg came home to the family homestead, Red'Arc Farm, in Direct, Texas.

In retirement Dick brought new life to the family farm. He started raising cattle, invested in pivot irrigation for the cropland, and planted an orchard. He was later recognized for his efforts with the Wildlife Conservationist and Farmer of the Year awards.

After 48 beautiful years together, Dick lost his beloved wife Trigg in 2006. Love found him again however when he met Eleanor Maddox in 2008. She too had recently lost her spouse, Ken. Dick and Eleanor saw in each other a new soul mate, and a love story began. They married in 2009 and had 11 wonderful years together. Their love transcended Dick's illnesses as Eleanor was with him every day and at his bedside when he drew his last breath.

Dick Crawford was a humble man. He probably never knew how many lives he positively impacted along the way. He was everyone's friend, and a mentor and father figure to many. He was a loving husband, brother, son and father, and a proud Aggie. He also loved being a private pilot, taking to the skies in his Mooney Executive N6446Q as often as he could. Free now from his earthly tethers, Dick is again enjoying the skies, and Heaven. Our hearts ache that he's gone, but there's comfort in knowing he no longer suffers.

The family will hold a private service on November 15th to inter Dick in the family cemetery at Red'Arc Farm. A celebration of his life will be held next year when more friends and family can gather.

Donations in Dick's name may be made to any organization working to find a cure for Parkinson's or Alzheimer's. A scientist at heart, Dick was a compassionate soul, and would want to help other families suffering from these afflictions.

To plant trees in memory, please visit our Sympathy Store.
Published by The Bryan-College Station Eagle on Nov. 15, 2020.
MEMORIAL EVENTS
No memorial events are currently scheduled.
To offer your sympathy during this difficult time, you can now have memorial trees planted in a National Forest in memory of your loved one.
Funeral services provided by:
Fry-Gibbs Funeral Home - Paris
GUEST BOOK
4 Entries
Eleanor, Trigg, and family; I loved Dick even more because of his love for Texas A&M. I last saw him at the old Royal Barber Shop where we had a fun visit. Great Aggie and friend. Ridley & Shirley
E. Ridley Briggs
November 16, 2020
Dick was a huge help to me when I was a new faculty member at TAMU in 1990. I'm so glad he got to enjoy time on his farm and with Eleanor and his extended family. He made the world a better place.
Margaret Slater
November 16, 2020
Praying for my basketball teammate at Consol Paul Crawford and Family...
Timothy Campbell
November 15, 2020
Heartfelt condolences to the Crawford family. Dick and the whole family were good friends of ours during our years in College Station. May you find God's Peace in the coming days.
Gary D Potter
November 15, 2020