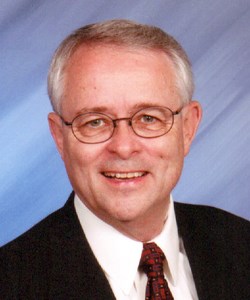 Richard Douglas Slack lived his life with a ready smile as a beloved husband and father. He was born Dec. 25, 1942 in Columbus, OH and died Nov. 14, in Austin, TX. He graduated from high school in 1960 in Cardington, OH and was inducted into the school's Hall of Fame.

He earned a B.S. from Bowling Green State University in 1964 where he was a member of Kappa Sigma Fraternity. He earned his M.S. from The Ohio State University in Zoology in 1966 and his Ph.D. in 1973. He was a Captain in the US Army. After a healthy, vigorous life, exposure to Agent Orange in Viet Nam eventually led to his diabetes and Parkinson's Disease.

Doug's career at Texas A&M University in Wildlife and Fisheries Sciences concluded as Professor Emeritus after 38 years. He was a Regents Professor and recognized as a national expert in Whooping Cranes and Black-capped Vireos. He authored numerous professional articles and secured millions of research dollars. His work was essential in the establishment of the Balcones Canyonlands Wildlife Preserve, a system of preserves of 30,500 acres managed by Austin and Travis County. He co-authored a student field research manual that has been in continuous use since 1982. He developed drop-net trapping techniques for marsh birds now used nation-wide.

Doug was elected Speaker of the Faculty Senate, chaired the search committee to replace TAMU President Robert Gates, served on the Athletic Council, and was assistant department head for many years. He served as president of the Texas Chapter and the Southwest Chapter of The Wildlife Society.

He simply loved teaching. Students were his priority. He participated in many initiatives related to curriculum, international studies, and writing in the science classroom. He initiated and conducted an international studies course in the Caribbean Island of Dominica. For most of his career, he was the advisor to the student chapter of The Wildlife Society. For his last lecture, he wore a tuxedo and dedicated the class to his four grandsons, urging his students to help maintain the earth's biodiversity.

Doug was active in various civic and church groups. He founded the Foxfire Homeowners Association and led the initiative to annex Foxfire to College Station. He served a period of years on the College Station Planning and Zoning Commission.

After retirement in 2011, Doug moved to Austin and served as executive director of the Texas Chapter of The Wildlife Society. A professional lobbyist commented that he'd never seen a legislative committee swayed by testimony until he heard Doug in action. A colleague called him "a giant in our world."

He was preceded in death by his parents Richard and Evelyn Irons Slack of Cardington, OH. He is survived by his wife of 55 years Charlotte Beard Slack; daughter Kathleen Noack, her husband Chris of Austin, grandsons Andrew and Steven; daughter Sandra Glover, husband Eric of Guilford, CT, grandsons Edward and Henry; brother Roger Slack of Mt. Gilead, OH; numerous cousins, nieces, nephews; and friends in abundance.

Because of Covid, no services are planned. His ashes will be interred in the cremation garden at Cook Walden/Forest Oaks Funeral Home Memorial Park in Austin, Texas.

An endowed scholarship in Doug's honor is being established with the Texas Chapter of The Wildlife Society, Attention: Dr. Doug Slack Memorial, PO Box 861, Del Valle, TX 78617 or online at https://tctws.org/support-us/

To plant trees in memory, please visit our Sympathy Store.
Published by The Bryan-College Station Eagle from Nov. 19 to Nov. 22, 2020.
MEMORIAL EVENTS
No memorial events are currently scheduled.
To offer your sympathy during this difficult time, you can now have memorial trees planted in a National Forest in memory of your loved one.
Funeral services provided by:
Cook-Walden/Forest Oaks Memorial Park
GUEST BOOK
7 Entries
A true sweetheart of a man! So pleasant and welcoming. Great career, wonderful family, strong marriage - he really has left a lasting impression on so many.
Mike Knight
November 20, 2020
Doug was an avid Texas A&M men´s basketball fan.He would always give a Gig em when they scored
Jan hunter
November 20, 2020
Sorry for your loss
Jan hunter
November 20, 2020
Charlotte, I am so sorry to hear about Doug. I remember when he came to speak about birds to our South Knoll 1st graders. He was so nice to the kids.
Sharee Wilkerson
November 19, 2020
I had the pleasure of serving on the faculty of Wildlife and Fisheries Sciences with Doug for 25 years. He was a superb teacher, excellent mentor to his graduate students, and a real faculty leader. He always placed the interest of the department and the university over his own. He has a passion for conservation that was reflected in everything he did. Doug, you made a real difference in the lives of many people and you made a real difference in protecting our natural world. RIP, my friend. Our thoughts and prayers go out to Doug's family. Dave Schmidly
David Schmidly
November 19, 2020
Charlotte-I´m so sorry to hear this sad news. We will keep you and your family in our thoughts and prayers. We live near Balcones wildlife refuge and am amazed to read your husband was instrumental in its establishment. What a remarkable life he led.
Mary Ann Nagyvary
November 19, 2020
I am so sorry for the family's loss. Mr. Slack was a good person. I work at TAMU and I have had the pleasure of knowing Mr. Slack thru different avenues. Mr. Slack will be missed.
Flora Reeves
November 19, 2020