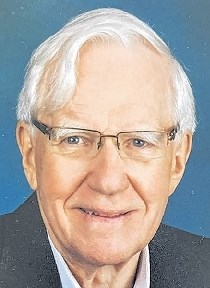 FUNERAL HOME
Lensing Funeral & Cremation Service
605 Kirkwood Ave
Iowa City, IA
JOHN MILTON LIITTSCHWAGER Iowa City John Milton Liittschwager of Iowa City died at University Hospitals and Clinics on Feb. 25, 2021, after a brief illness. John was born Oct. 24, 1934, son of Otis J. and Anna B. Liittschwager, in Buckeye, Iowa. On June 19, 1955, he married Virginia Lou Idso in Alden, Iowa. He graduated with a bachelor's degree from Iowa State University and a master's degree from Northwestern University. In 1961, John and his growing family moved to Iowa City, where he was a professor of industrial engineering at the University of Iowa. He retired in 1997. He served as a reserve in the U.S. Army Corps of Engineers for over 25 years, attaining the rank of Colonel. John enjoyed playing cards with friends and family members, tending his tomato garden, and was a big fan of Hawkeyes athletics, attending countless softball, basketball and football games over the years. As a young man, John became interested in genealogy, which became a lifelong passion and prompted several trips to Europe, Salt Lake City and other locales to research current and past relations. He had traced family history back several centuries and had written extensively on it. John was also a longtime member of Our Redeemer Lutheran Church in Iowa City, where he had served as an elder. John was preceded in death by his parents and wife, Virginia. He is survived by his four children: son, Jeff (Patti) of Clive, daughter, Fonda Weber (Lyle) of Coralville, son, Rob of Iowa City and daughter, Jean (Trey Matteson) of Palo Alto, Calif.; and by six grandchildren and four great-grandchildren; as well as his sister, Lucinda Ann Lowery (Dick) of Green Valley, Ariz. A private family committal service will be held on Saturday, March 13, at the Buckeye, Iowa, Cemetery. A celebration of his life will be planned for a later date. Condolences may be sent to the family c/o Lensing Funeral & Cremation Service, PO Box 167, Iowa City, IA 52244. Online condolences may be sent to www.lensingfuneral.com.
To plant trees in memory, please visit our Sympathy Store.
Published by The Gazette on Mar. 7, 2021.
MEMORIAL EVENTS
Mar
13
Committal
Buckeye, Iowa Cemetery
, IA
Funeral services provided by:
Lensing Funeral & Cremation Service
MEMORIES & CONDOLENCES
Sponsored by Lensing Funeral & Cremation Service.
0 Entries
Be the first to post a memory or condolences.