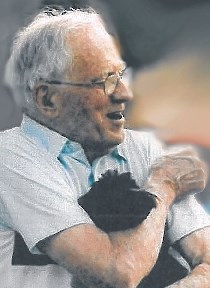 FUNERAL HOME
Teahen Funeral Home - Cedar Rapids
3100 F Avenue NW
Cedar Rapids, IA
JOHN W. SELLERS Cedar Rapids John W. Sellers, 102, died Wednesday, March 13, 2019, at Cottage Grove Place. A Celebration of Life will be held at a later day. Teahen Funeral Home and Cremation Service is serving the family. John was born on April 13, 1916, in Wausau, Wis., and was one of three sons of Bessie and Harry Sellers. The family later moved to the Chicago suburbs and later, during the Depression years, farmed near Vandalia, Ill., and finally, moved to Macon near Decatur. John was extremely interested in the "why" and "how?" from an early age, and demonstrated this keen involvement in science by graduating from the University of Illinois at Champaign-Urbana with a B.S. in chemistry and earned his Ph.D. in organic chemistry from Ohio State University in 1949. To help defray the college costs, he worked at Food Materials in Chicago, where he had a hand in developing artificial flavors including butterscotch and strawberry. While pursuing post-doctorate studies at OSU, he was granted a fellowship by the Firestone Tire and Rubber Co. to develop a method by which post-war synthetic rubber tires could be permanently colored black. Upon obtaining his Ph.D., John relocated to Akron, Ohio, and continued his employment with Firestone in their Research and Development Division. He met and married his wife, Lee, of Akron in 1944 and the young family began sprouting children, Rick in 1946 and Diane in 1951. John would go on to opportunities with the Research Division of PPG Industries in nearby Barberton. In 1965, he answered the call to try life in the big city when he accepted a position with Tenneco in NYC and later, H.J. Heinz in Pittsburgh. He eventually retired as part-owner of technical research firm Interscience in Tampa, Fla. He later moved to Cedar Rapids in 2004 after the death of wife Lee, with whom he spent many years enjoying retirement including traveling, visiting his children and their respective families, or being the "go to person" when various entities in Florida encountered problems with their swimming pools! John is survived by a daughter, Diane Heras of Wesley Chapel, Fla.; a son, Rick (Wanda) Sellers of Cedar Rapids; three grandchildren, Amy Ferrell of Golden, Colo., Loralee O'Malley and Tim Sellers, both of Marion; five great-grandchildren, Wendy and Jane Ferrell of Golden, Colo., Avia Sellers of Vinton and Brinlee and Caitlin O'Malley of Marion. John was preceded in death by his wife of 60 years, Lee; two brothers, Seth and Verne Sellers; and a granddaughter, Mariella Heras. Memorials may be directed to Camp Courageous. Online condolences can be left at www.teahenfuneralhome.com.
Published by The Gazette on Mar. 14, 2019.
To plant trees in memory, please visit the Sympathy Store.
MEMORIAL EVENTS
To offer your sympathy during this difficult time, you can now have memorial trees planted in a National Forest in memory of your loved one.
Funeral services provided by:
Teahen Funeral Home - Cedar Rapids
MAKE A DONATION
MEMORIES & CONDOLENCES
Sponsored by Teahen Funeral Home - Cedar Rapids.
9 Entries
John embraced life fully and always offered an interesting conversation. Rick and family, may you find comfort during this difficult time. I know you have a wealth of happy memories of John to keep in your hearts.
Christine Powers
March 15, 2019
Rick,Wanda and Family. My sincere sympathy for your dad and grandfather. My thought and prayers are with you. John was a very kind and generous man
SHIELA PETERSEN
Friend
March 15, 2019
Rick, Wendy and family, so sorry for the loss of your father, grandfater. He seems like a very inreresting guy as I read his remembrance piece. I know you all will miss him so. Please accept my condolences. You all will be in my thoughts and prayers
Chris Glover
March 14, 2019

So sorry for your loss. May your hearts soon be filled with wonderful memories of joyful times that you shared together. May the underserved kindness of our Heavenly Father provide you with the comfort that you need. (Psalms 94:19)
PJG
March 14, 2019
Rick and family, sorry about your loss, but joyful for his long and fruitful life.