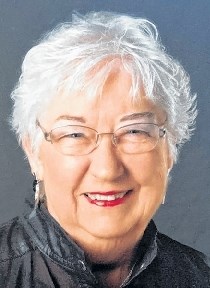 ABOUT
Williamsburg High School
FUNERAL HOME
Lensing Funeral & Cremation Service - Iowa City
605 Kirkwood Avenue
Iowa City, IA
KATHLEEN MCKEEN Iowa City Kathleen McKeen, beloved member of the Iowa City community, passed away Friday, Oct. 1, 2021, at the age of 80. To celebrate her life, a funeral service will be held at 11 a.m. Wednesday, Oct. 6, at Lensing Funeral and Cremation Service, 605 Kirkwood Ave., Iowa City, where Kathleen's family will greet friends from 9 to 11 a.m. Burial will follow at Memory Gardens Cemetery in Iowa City. The service will be livestreamed for those who cannot attend with a link posted on Kathleen's obituary page at www.lensingfuneral.com, under her Tribute Wall. Kathleen Marie was born Aug. 7, 1941, in Williamsburg, Iowa, the oldest of seven children to James and Clarrita Ellen (O'Rourke) Lillis. She was raised in Williamsburg, where she graduated from Williamsburg High School in 1959. Kathleen met and married the love of her life, Richard "Dick" McKeen on July 8, 1967, at St. Thomas More in Iowa City, Iowa. The career driven couple created a life they loved in Iowa City and always spent time doing what they loved with the ones they loved most. Kathleen was more than an aunt to her nieces and nephews, whom she adored and in return, loved her dearly. Kathleen worked in the cancer registry field for 59 years, serving as the director of the Iowa Cancer Registry for more than 36 of those years. She was the University of Iowa's longest-serving employee in the professional and scientific category. Originally hired as an administrator for the UI Hospitals and Clinics Oncology Registry, McKeen advanced from cancer surveillance on a campus level to overseeing the statewide registry. She started at UIHC cancer registry in 1959 and was named the assistant director of the new statewide cancer registry in 1978 and director in 1982. Kathleen retired in 2018 from the College of Public Health's Department of Epidemiology. Kathleen was instrumental in the creation of the Iowa Cancer Registrars Association, the National Cancer Registrars Association and the North American Association of Central Cancer Registries, serving in many leadership positions in these organizations. She has contributed significantly to the development of quality statewide and national cancer surveillance databases to the standardization of data and developing certification for registrars and registries. Kathleen was a recipient of the SEER Program Lifetime Achievement Award in 2003 and 2009, and the University of lowa David J. Skorton Staff Excellence Award for Public Service in 2010. Kathleen received the 2001 Calum Muir Award for Lifetime Achievement from the North American Association of Central Cancer Registries in recognition of an outstanding career distinguished by personal excellence and by serving as a mentor for others in the field of cancer registration. She has been a resource and mentor for new registrars and registries throughout the years, by sharing her knowledge and experience freely and eagerly with others. Kathleen's wealth of knowledge and history in the cancer registration field is a legacy of hers that will live on forever. Her career was an important part of who she was and took great pride in. But she also loved time spent with her family, friends, colleagues, especially if it meant cheering on the Hawkeyes. Kathleen and her husband supported the University of Iowa and its student-athletes for decades and was a long labor of love for the couple which they enjoyed greatly. She is survived by her siblings, John (Judy) Lillis of Williamsburg, Iowa, Roseann Williams of Gallatin, Tenn., Mary Clare (Jerry) Moen of Clive, Iowa, and Terry (Joyce) Lillis of Urbandale, Iowa; a sister-in-law, Kathleen Lillis of St. Louis, Mo.; and a brother-in-law, Paul McKeen of Mesa, Ariz. Kathleen also leaves behind numerous nieces, nephews, great-nieces and great-nephews, who all shared a special bond with her. She was preceded in death by her parents; her husband, Dick McKeen, in March 2021; her parents-in-law, Eugene and Dorothy McKeen; two brothers, Bill and Steve Lillis; and sister and brothers-in-law, Bud Williams, Donna McKeen and Pat and Kermit Fessler. In lieu of flowers, memorials may be directed to the Dick and Kathleen McKeen Memorial Fund c/o University of Iowa Center for Advancement, 1 West Park Road, Iowa City, IA 52242, designated to the Iowa Athletic Scholarship Fund or The Holden Comprehensive Cancer Center. Online condolences and memories of Kathleen may be shared at www.lensingfuneral.com.
Published by The Gazette on Oct. 5, 2021.
To plant trees in memory, please visit the Sympathy Store.
MEMORIAL EVENTS
Oct
6
Visitation
9:00a.m. - 11:00a.m.
Lensing Funeral & Cremation Service - Iowa City
605 Kirkwood Avenue, Iowa City, IA
Oct
6
Celebration of Life
11:00a.m.
Lensing Funeral & Cremation Service - Iowa City
605 Kirkwood Avenue, Iowa City, IA
Funeral services provided by:
Lensing Funeral & Cremation Service - Iowa City
MAKE A DONATION
MEMORIES & CONDOLENCES
Sponsored by Lensing Funeral & Cremation Service - Iowa City.
2 Entries
Please get this message to the family-we send our Heartfelt Thoughts & Prayers to the family of Kathleen, I have been recouping from triple bypass heart surgery. God Bless. Bob Hanson & Nancy Mitchell from Cedar Rapids
Robert J Hanson
November 20, 2021
May God bless you and your family in this time of sorrow.
James Nolan
Friend
October 5, 2021
Showing 1 - 2 of 2 results