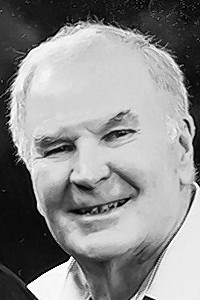 FUNERAL HOME
Reiff Funeral Home - Cascade
205 Hayes Street SW
Cascade, IA
KENNETH JOHN MCDERMOTT Cascade Kenneth John McDermott, 77, of Cascade, Iowa, passed away on Saturday, July 25, 2020, at his home in Cascade, Iowa, surrounded by his family. Visitation for Kenneth will be held from 3 to 8 p.m. Tuesday, July 28, at St. Martin's Catholic Church in Cascade, Iowa. Social distancing will be followed, as recommended by federal and state guidelines. Face masks are required to attend the visitation. Anyone interested in sending memorials may send them to Reiff Funeral Home, Attn: Kenneth McDermott Family, at P.O. Box 430, Cascade, IA 52033. A Mass of Christian Burial will be held at 10:30 a.m. Wednesday, July 29, at St. Martin's Catholic Church in Cascade, Iowa, with the Rev. Douglas Loecke presiding, and the Rev. Mark Osterhaus concelebrating. Burial will be held in Calvary Cemetery in Cascade, Iowa, with full military honors afforded by the Cascade American Legion Post 528. He was born April 8, 1943, in Cascade, Iowa, son of Raymond M. and Lenore R. (Dolphin) McDermott. He was a graduate of St. Martin's High School in 1961 and attended college at DeVry Technical Institute. In 1965, he volunteered as a lay missionary with Divine Word Missionaries in Papua New Guinea. This is where he met Maureen Trotter, his future wife of 52 years. On June 1, 1968, he was united in marriage to Maureen Trotter in Beechwood, New South Wales, Australia. Upon returning to Iowa, he fulfilled his draft obligation and spent 11 months in Vietnam. Kenneth and Maureen started their family business of McDermott Oil Company in 1972, which they operated for many years until their retirement. In his retirement years, he enjoyed wintering in Mesa, Ariz., where he could golf and relax with his friends and family. Kenneth was an avid golfer and sports fan, especially of the Boston Red Sox, Chicago Bears, Iowa Hawkeyes and the Creighton Bluejays. Kenneth was a veteran, having served in the U.S. Army during the Vietnam War. He was a member of St. Matthias Parish in Cascade, Cascade Knights of Columbus Council 930 and Cascade American Legion Post 528. He also was a former member of the Cascade Volunteer Fire Department and past Cascade City Council member. He is survived by his wife, Maureen McDermott of Cascade, Iowa; four children, Jason (Dede) McDermott of Cascade, Iowa, Kristi McDermott (Gerry Notara) of Charlotte, N.C., Michele (Jon) Freesmeier of Cedar Rapids, Iowa, and Aaron McDermott of Marion, Iowa; six grandchildren, Sam, Rachel, Rebecca and Anna McDermott, and Nathan and Claire Freesmeier; five brothers, Alan (Margie) McDermott of Cascade, Iowa, Bob (Barb) McDermott of Tempe, Ariz., Earl (Mary) McDermott, Jerry (Shirley) McDermott, both of Cascade, Iowa, and Howard (Carol) McDermott of Monticello, Iowa; and brothers and sisters-in-law, all from Australia, Father Trevor Trotter of Melbourne, Irene (Owen) Wheatley of Toowoomba, Pat Trotter of Wauchope, Clare (Terry) Groom of Nerang, Barbara (Paul) Downie of Alexandria Hills, Kathy Trotter of Darwin and Lesley (Mark) Linton of Cedar Creek. He was preceded in death by his parents; father and mother-in-law, Bob and Dorothy Trotter; his sister; Betty (Jack) Vance; and three sisters in infancy. In lieu of flowers, the family requests memorials for Kenneth be given to Aquin Elementary in Cascade or Divine Word Seminary in Epworth. Online condolences may be sent to the family at www.reifffuneralhomeinc.com. The family would like to thank Bill and Kathy Gehl for all their help and support, and Hospice of Dubuque, Home Instead, and the Mayo Clinic doctors in Minnesota and Arizona. Thank you to everyone for the well wishes, support, and prayers.
To plant trees in memory, please visit our Sympathy Store.
Published by The Gazette on Jul. 28, 2020.
MEMORIAL EVENTS
Jul
28
Visitation
3:00p.m. - 8:00p.m.
St. Martin’s Catholic Church
, Cascade, IA
Jul
29
Mass of Christian Burial
10:30a.m.
St. Martin’s Catholic Church
, Cascade, IA
Funeral services provided by:
Reiff Funeral Home - Cascade
MEMORIES & CONDOLENCES
Sponsored by Reiff Funeral Home - Cascade.
14 Entries
Kenny, I’ll miss the quick chats when grabbing a bite to eat. Rest in peace. Maureen, Jason and the rest of the McDermott family you have our deepest sympathy.

Jim Reinke and Family
James Reinke
Friend
August 1, 2020
My sympathy to the entire family. I'm sorry I wasn't able to make it to the wake, but please know you are in my thoughts and prayers. Ken was a wonderful man - always kind and generous, with a smile on his face. He was a great citizen of our community and will be remembered for all he did. I will miss his smile when I go into McDermott Oil; he always had a friendly greeting. (He was so proud of the new building and gave me a tour the first time I went in!) May your memories bring you peace, comfort and smiles.
Lee Ann Leytem
Friend
July 29, 2020
May God bless you and your family in this time of sorrow.
Greg and Gloria Otting
July 28, 2020
It has been many years since I have seen either of you guys. Maureen and families , my deepest sympathy goes out to all of you. Prayers and thoughts. The video was wonderful.
Pat and Carol Coohey
Acquaintance
July 28, 2020
To All of Uncle Kenny’s Family...

Try to keep your heads high and smile through this very Difficult Time.... Kenny would really like that!! Things will get a little different and better as time heals....

Randy McDermott
262-206-1291
Randy McDermott
Family
July 28, 2020
Maureen & Family,
Our prayers are with you and we are deeply sadden by the passing of Kenny. He was a true family and community
man and will always be fondly remembered in the community. Rest in Peace Kenny.
Mike & Deb Mahoney
Mike Mahoney
Friend
July 28, 2020
Thank you for your service to our country REST IN PEACE
A VIETNAM VETERAN Hiawatha Iowa
July 28, 2020
Ken will be greatly missed by family, friends and community. His smile was contagious! Rest In Peace Ken
Norb and Monica Recker
Friend
July 27, 2020
May the love of friends and family carry you through your grief.
Cindy McDermott
Friend
July 27, 2020
John and I would like to express our deepest sympathy to the McDermott family in the loss of Ken. He was a special person and did a lot for the community. May all your great memories sustain you at this sad time.
Barbara Hacke
Friend
July 27, 2020
Sorry to hear about the loss of Kenneth.
Mike Harrington
Acquaintance
July 27, 2020
So sorry for your loss. Enjoyed working for him.Was proud that he took over Grandpa’s Business and turned it in to what it is today. Rest in peace Kenny.
Mike McNally
Coworker
July 26, 2020
Maureen, you and your family have our deepest sympathy. May your grief be lessened knowing that Ken is with the Lord. Blessings and prayers.
Pam and Arlan Van Wyk
Friend
July 26, 2020
Extremely saddened to hear of Kenny’s passing. Prayers and thoughts to all of you at this difficult time. Certainly liked working for him years ago and serving him at the Club 528 and The Nest.