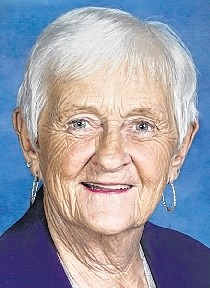 BORN
1933
DIED
2021
FUNERAL HOME
Lensing Funeral & Cremation Service
605 Kirkwood Ave
Iowa City, IA
PAULINE KATHERINE (SUEPPEL) MCAREAVY Iowa City Pauline Katherine (Sueppel) McAreavy, 87, died peacefully on Friday. June 18, 2021, at The Bird House Hospice Home in Iowa City following a brave battle with ALS. A Mass of Christian Burial will be celebrated Monday, June 28, at 10 a.m. at St. Mary's Catholic Church in Oxford with Father Robert Cloos officiating. Visitation will be on Sunday, June 27, 2021, from 2 to 5 p.m. at the church with a vigil at 5 p.m. Memorials can be directed to the Pauline Katherine McAreavy Memorial Fund. The family intends to distribute funds to Iowa City Hospice, the Bird House and the Iowa ALS Chapter that supported her challenging journey. Pauline was born Aug. 21,1933, in Iowa City, the daughter of Francis William and Katherine C. (Striegel) Sueppel. She was raised in Iowa City and was a graduate of St. Mary's High School. Pauline devoted her life to providing health care. She graduated from Mercy School of Nursing as a Registered Nurse (RN). She began her career as an OB/Gyn nurse at Mercy Hospital and went on to serve as school nurse for over 30 years in the Clear Creek School District, retiring in 1995. She then went on to volunteer at Mercy Hospital for nearly 20 years up until the summer of 2020. Continuing her devotion, even after passing, Pauline donated her remains for ALS research. Pauline ignited a fairy-tale romance from the first moment she saw Tom walk across the basketball gym floor in his white corduroy pants and immediately told her friend, "That is the man I am going to marry." Pauline married Thomas McAreavy on Sept. 1, 1956, in Iowa City. Pauline and Tom moved to Oxford in 1959 where they were members of St. Mary's Church and Pauline served on the Oxford town council. She served on the Johnson County Board of Health, was a member and volunteer with Mercy Hospital Guild, and had accumulated over 3,500 hours as patient advocate at Highland Ridge in Williamsburg. Pauline provided much community service to the school district, including starting the Christmas Basket Program, and was inducted into the Clear Creek-Amana Hall of Fame. Pauline enjoyed having coffee and pie on Tuesday mornings with the "church ladies" at the Oxford Sale Barn and lunch with her Mercy classmates (The Divas). She was an avid golfer and euchre aficionado. Most important to Pauline was time spent with family at their annual campouts and attending her children's, grandchildren's and great-grandchildren's school events. She was known to play cards and dominos to the wee hours of the morning with family and friends. Pauline is survived by her children, Michael "Mick" (Karin) McAreavy of Phoenix, Ariz., Mary (Dave) Bontrager of Iowa City, Mart (Brenda) McAreavy of Iowa City, Melinda (Bruce) Ball of Flushing, Mich., Morgan (Mary) McAreavy of Holstein and Matthew (Jody) McAreavy of Oxford; 16 grandchildren, Justin (Alana), Tyler (Karyn), Jasmine (KC), Jordan, Kylie (Mike), Tayler, Amanda (Matt), Sean (Morgan), Adam, Abra, Josh (Lyndsey), Madeline (Jamison), Patrick (Sarah), Annie Conor (Ben), Keyan and Kaden; 14 great-grandchildren, Corinne, Dakota, Olivia, Regan, Xander, Vaughn, Beckham, Quinn, Audrey, Conner, William, Penelope, Tommy and Ite; her siblings, Marilyn Simpson of Eldridge, Alice Finnegan of Tipton, and Paul (Carolyn) Sueppel and Ann Madsen, both of Iowa City; and sisters-in-law, Patricia Sueppel, Mercy Sueppel and Carol Sueppel, all of Iowa City. Pauline was preceded in death by her husband, Tom; parents, Frank and Katherine; her brothers, William, Robert, Francis "Bud;" and in-laws, Jerry Simpson, Sonny Madsen, Tom Finnegan, Judy Sueppel, John Francis (Joan) McAreavy, Mary Lou (Bill/Pat) Harney and Terry McAreavy. Online condolences may be sent to www.lensingfuneral.com.
Published by The Gazette on Jun. 22, 2021.
To plant trees in memory, please visit the Sympathy Store.
MEMORIAL EVENTS
Jun
27
Visitation
2:00p.m. - 5:00p.m.
St. Mary's Catholic Church
Oxford, IA
Jun
27
Vigil
5:00p.m.
St. Mary's Catholic Church
Oxford, IA
Jun
28
Mass of Christian Burial
10:00a.m.
St. Mary's Catholic Church
Oxford, IA
Funeral services provided by:
Lensing Funeral & Cremation Service
MAKE A DONATION
MEMORIES & CONDOLENCES
Sponsored by Lensing Funeral & Cremation Service.
3 Entries
Pauline was the best person to start a career at CCAHS with that could be. She was fun, brutally honest, and yet compassionate. I miss the sense of "family" both she and Tom projected in and out school. I have great memories of her laughing to high heaven as the Millers, she and Tom beat the pants off myself and Jim White playing six handed euchre. Her presence at our annual "senior supper" was always a delight as she taught many students how to play the game. My condolences to the family and her many friends
Mark Hovey
June 26, 2021
My deepest sympathy to the entire family of Pauline.
Jean Bear-Faaborg
June 22, 2021
Everyone in heaven will have a smile today, the best joke and story teller I have ever met, she could light up a room with her personality, and her spirit. Shine bright dear, dear friend, you were such a joy to know. May the Lord be with all your family. How blessed we all were to have had her in our lives.
Ron and Pat Lewis
Friend
June 21, 2021
Showing 1 - 3 of 3 results