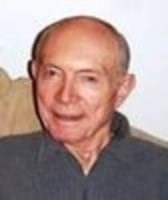 BORN
1924
DIED
2021
FUNERAL HOME
Fred C. Dames Funeral Home and Crematory
3200 Black at Essington Roads
Joliet, IL
James Hornik, Jr.
James Hornik, Jr., age 97, passed away peacefully, Friday, September 17, 2021 at Symphony at the Tillers, Oswego.
Born May 26, 1924 in Chicago, he was the son of the late James and Elizabeth (Mihalov) Hornik. He married the love of his life, Adeline (nee Bernasek) Hornik, and they enjoyed 67 years of marriage until her passing in 2018. Two sisters, Mildred Stulgo and Marie Mielcarski, and two brothers, Robert and Richard, also preceded him in death.
Jim was raised and educated in Chicago, and he and Adeline lived in Lemont for 30 years and then in Joliet for nearly 20 years. He was a retired engineer.
Jim was a U.S. Army Air Corps veteran who proudly served his country during WWII. A humble man, most were unaware Jim received several citations for his service including the European - African - Middle Eastern Campaign Medal with four bronze stars, and the Air Medal with three oak clusters. He was honorably discharged as a Staff Sergeant when the war ended having served in Southern France, Normandy, Northern France, the Rhineland, and England.
He is survived by his brother, Leonard (Patricia) Hornik of Streamwood; and two dear nieces, Carol (Orville) Bates of Channahon, and Karen (the late Dennis) Belcher of Mesa, AZ. Numerous other nieces, nephews, great nieces and great nephews also survive.
Visitation for James Hornik will be held Friday, September 24, 2021 from 10:30 a.m. until the time of a prayer service at 11:30 p.m. at the Fred C. Dames Funeral Home, 3200 Black Road, Joliet. Interment will be in Abraham Lincoln National Cemetery, where military honors will be accorded.
For more information, please call (815) 741-5500, or visit his Memorial Tribute at www.fredcdames.com