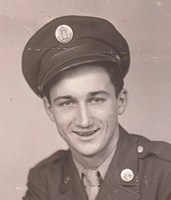 BORN
1923
DIED
2021
FUNERAL HOME
Overman-Jones Funeral Home
15219 South Joliet Road
Plainfield, IL
Leon D. Mowrer
Born: December 9, 1923 in Joliet, IL
Died: September 10, 2021 in Plainfield, IL
Leon D. Mowrer, age 97, a longtime resident of Plainfield, IL, passed away Friday, September 10, 2021, at his home. He was born December 9, 1923, in Joliet, IL. He was the cherished husband of the late Eleanor E. Mowrer, nee Jones. Beloved father of Kathy and son-in-law Paul Lutz. Adored grandfather of Kristin (Michael) Upchurch and Paul (Kerri) Lutz. Loving great-grandfather of Arabella, Alyssa and Andrew Upchurch and Mason and AlaynaLutz. Dear brother-in-law of Ada Cline Jones, brother of Lee (Judy) Mowrer, Kirk (Linda) Mowrer, Ron Mowrer and sister Sue May.
He was preceded in death by his beloved mother, Anna J.(Koenig) Mowrer, brothers-in-law, Everette Jones and Harold Jones, sisters, Phyllis Surdey and Loretta Vining, brother Jimmy Mowrer and brother-in-laws, Cecil Surdey and Chandler May.
Leon attended St. Johns School and Joliet CatholicHigh. He met the love of his life, Eleanor, while working as an usher at the Rialto Theater before the war. They were married on June 1, 1947 atthe First Presbyterian Church in Joliet, IL. They were happily married for 68 wonderful years.
Leon enlisted in the Army in March of 1943. He served with the 63rd Infantry overseas in France and Germany and received two Bronze Stars for his efforts to help crack the Siegfried Line. While under fire he kept communications open. Leon was extremely proud of his military service and his country.
When he came back from the War, he worked for the E. J.& E. Railroad as a machinist in Joliet and Gary and Whiting, IN. He retired after 40 years of service.
Leon attended the Plainfield United Methodist Church, was a lifetime member of Cantigny VFW Post 367 in Joliet, was a long-time member of American Legion Marne Post 13 in Plainfield, belonged to the Joliet Moose and the Elks Club.
He loved square dancing & traveling with Eleanor. Golfing was his passion as well as fishing. He was an avid model railroader & made beautiful model ships and planes. His model planes are displayed in theAviation Center at Lewis University. He was a huge Cubs fan and frequently went to Meza, AZ for spring training.
In addition to his family, he leaves behind many wonderful friends. His family would like to thank the staff, Fab 50 members and preschoolers at Avery YMCA for taking him to their hearts. Thank you also to his friends and staff at American House Cedarlake for their friendship and care. Lastly, thank you to Residential Hospice, McKenzie, Amber, Jessica and Kathy and his caregiver, Elizabeth, for easing his last days.
Visitation will be from 9:00 -11:00 AM, Wednesday,September 15th at Overman-Jones Funeral Home, 15219 S. Joliet Road, Plainfield, IL 60540. The service will follow at 11:00 AM at the funeral home. Burial will follow at Woodlawn II Cemetery, Joliet, IL.
For more information, please call 815-436-9221 or www.overman-jones.com.

Published by The Herald-News from Sep. 12 to Sep. 13, 2021.
To plant trees in memory, please visit the Sympathy Store.
MEMORIAL EVENTS
Sep
15
Visitation
9:00a.m. - 11:00a.m.
Overman-Jones Funeral Home
15219 South Joliet Road, Plainfield, IL
Sep
15
Service
11:00a.m.
Overman-Jones Funeral Home
15219 Joliet Rd., Plainfield, IL
Sep
15
Burial
Woodlawn II Cemetery
Joliet, IL
Funeral services provided by:
Overman-Jones Funeral Home
MAKE A DONATION
MEMORIES & CONDOLENCES
Sponsored by Overman-Jones Funeral Home.
4 Entries
I loved when Leon stopped to say hello when he came over to the Breakfast Club at Lewis University. Always happy and smiling!
Sherri Chasteen
Friend
October 3, 2021
Dear Kathy, I just saw your father´s obituary. I´m so sorry. I only have good memories of your parents on Garden St. You are blessed to have many wonderful years of memories with your father. Lovingly, Gloria
Gloria Griparis
September 21, 2021
Leon was one of the original members of our Lewis U Breakfast Club. SO many great memories with so many great people. We enjoyed celebrating his 90th bday with him. Really enjoyed his stories and sense of humor and of course his love for the Cubs.
Jill Lewis U
Other
September 15, 2021
It was a pleasure to be your friend. I'll never forget the times we spent together.
Joe Miraglia
Friend
September 13, 2021
Showing 1 - 4 of 4 results