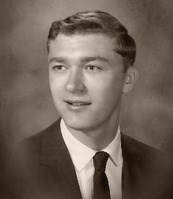 BORN
1946
DIED
2021
FUNERAL HOME
Tezak's Home to Celebrate Life
1211 Plainfield Road
Joliet, IL
Robert L. Baudek
Born: December 9, 1946
Died: July 15, 2021 in Crest Hill
Robert L. Baudek
Age 74 of Joliet, passed away peacefully at his home on Thursday, July 15, 2021 with his family by his side.
Born December 9, 1946 in Joliet, Robert was the son of Louis and Helen (Malnar) Baudek. He graduated from Joliet Catholic Academy and received an Associates degree in Radio Broadcast and Communications from Joliet Junior College. Robert proudly served his country with the United States Army Reserves Corp program for six years.
Robert worked as manager for his family's radio station WAJP 93.5 FM until the station sold in 1985. He then went on to work for Menards in Joliet up until he retired at 65 years old. Robert was a devoted Christian who loved the Lord and was a longtime parishioner of St. Mary Nativity Catholic Church in Joliet. His love of movies and music along with travelling throughout the Midwest were his choices of amusement. Robert was also an exclusive and avid Chicago Cubs fan. He will be deeply missed by all who knew him.
He is survived by his sons: Randall (Kasia) Baudek and Jeffrey (Katina) Baudek; grandchildren: Patryk and Emily; long-time girlfriend and best friend: Joan Dollinger; aunt: Lillian Musich; cousin: Dr. Thomas Musich, and ex-wife and mother of their children: Sharon Kerbis.
Robert was preceded in death by his parents: Louis and Helen Baudek, and aunt: Mary Jane Pohlers.
Family will receive relatives and friends for a visitation on Sunday, July 18, 2021 from 4:00 p.m. until 8:00 p.m. at Tezak Funeral Home, 1211 Plainfield Road in Joliet. A celebration of Robert's life will continue on Monday, July 19, 2021 with a visitation from 9:00 a.m. until time of closing prayers beginning at 9:30 a.m. The funeral will then drive in procession to St. Mary Nativity Catholic Church for a Mass of Christian Burial beginning at 10:00 a.m. Interment will follow and Robert will receive full military honors and be laid to rest at St. Mary Nativity Catholic Cemetery in Crest Hill.
In lieu of flowers, memorial contributions may be made as gifts in Robert's memory to Lightways Hospice (formerly known as Joliet Area Community Hospice) or to St. Mary Nativity Catholic Church in Joliet.
Obituary and tribute wall for Robert are available at www.tezakfuneralhome.com. Arrangements entrusted to:

Published by The Herald-News from Jul. 16 to Jul. 19, 2021.
To plant trees in memory, please visit the Sympathy Store.
MEMORIAL EVENTS
Jul
18
Visitation
4:00p.m. - 8:00p.m.
Tezak's Home to Celebrate Life
1211 Plainfield Road, Joliet, IL
Jul
19
Visitation
9:00a.m. - 9:30a.m.
Tezak Funeral Home
1211 Plainfield Road, Joliet, IL
Jul
19
Prayer Service
9:30a.m.
Tezak Funeral Home
1211 Plainfield Road, Joliet, IL
Jul
19
Mass of Christian Burial
10:00a.m.
St. Mary Nativity Catholic Church
Joliet, IL
Funeral services provided by:
Tezak's Home to Celebrate Life
MAKE A DONATION
MEMORIES & CONDOLENCES
Sponsored by Tezak's Home to Celebrate Life.
4 Entries
We are deeply sorry to hear of Bob´s passing. Our thoughts and prayers are with his family!
Dave and Judy Smrekar
Family
July 19, 2021
Sending our thoughts, prayers and love to all, such a nice man. Love Jim and Lou
Jim and Louise Baudek
Family
July 19, 2021
I am sorry to hear of Bobs passing. I worked with Bob at WAJP for many years. We enjoyed many hours there. After the station was sold Bob arranged a reunion lunch at Merichkas for all the former staff. We shared a lot of memories that day. I wish to offer my condolences to the family at this sad time.
Don Weber
July 17, 2021
Dear Randy, Jeff, and Joan, I am shocked and deeply saddened upon learning of Bob's passing. In our youth, we were like brothers. We shared many experiences together and spent hours and hours discussing Fords, Chevrolets, the Cubs strengths and weaknesses, JCHS, and WAFP. Wiffle ball, home run derby, Sunday chicken dinners, and accordian duets are all but a distant but comforting memory. Always remember that our friend/your dad was a kind and thoughtful person and was a forever devoted father. We will all be united again someday just as Bob is now with his mother Helen, his father Louie, grandpa and grandma Malnar, Al and Mary Jane. His work on earth is now complete, and it's up to us to travel our path which Bob helped build. May you now rest in eternal peace Cousin...
Tom Musich
Family
July 17, 2021
Showing 1 - 4 of 4 results