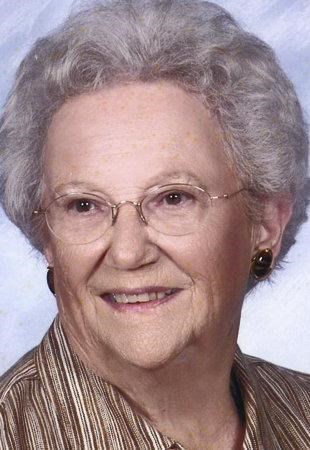 BORN
November 17, 1922
DIED
June 7, 2021
FUNERAL HOME
Solt-Wagner Funeral Home
1507 17th Street
Central City, NE 68826
CENTRAL CITY - Della May (Schott) Ksiazek, 98, of Central City, died Monday, June 7, 2021, at Cottonwood Estates in Central City.
Funeral services will be at 10:30 a.m. Monday, June 14, at the United Methodist Church in Central City with Pastor Tom Lucas officiating.
Visitation will be from 5 to 7 p.m. Sunday, at Solt-Wagner Funeral Home in Central City. Interment will be at 1:30 p.m. Monday in the Silver Creek Cemetery.
Memorials are suggested to the family to be designated at a later date. Condolences may be sent to the family at www.soltwagnerfuneral.com.
Della May (Whited) Ksiazek was born in Omaha on Nov. 17, 1922. In August 1923, she was adopted by Frank and Myrtle (Harris) Whited of Silver Creek. She started her education at a country school west of Silver Creek, with her mother as her teacher. The family soon moved to Silver Creek because of her father's failing health.
Della May was very active in music at school and church. She graduated from Silver Creek High School in 1939, after which she taught country school in Polk and Merrick counties for three years. On June 21, 1942, she was united in marriage to Gerald Schott at the Methodist Church in Silver Creek. They lived on a family farm 2.5 miles northeast of Clarks where they resided until Gerald's death in November 1970. To this union were born three children, Linda Kay, Genelle Ann and Gordon Franklin. For a short time after Gerald's death, Della May worked as an Assistant House Mother at the Masonic Eastern Star Home for children in Fremont.
In January 1972, she was united in marriage to Alonzo Ksiazek at Alhambra, Calif. They resided on a family farm four miles west of Clarks.
Della May was a 70-plus-year member of Arbor Chapter 200 of Order of the Eastern Star in Central City and was an 86-year member of the United Methodist Church and was a member of the Central City United Methodist Church. She has played the piano and organ for church, weddings, funerals and nursing homes throughout the years.
She is survived by a daughter, Linda Kay Ksiazek of Rockford, Ill.; a son, Gordon Schott of Central City; her grandchildren, Kim Ksiazek, Kevin Ksiazek, Brad Clements, Geremy Schott, Corey Clements, Richie Clements, Kurtis Clements, Megan Dubas, and Travis Schott; eight great-granddaughters; three great-grandsons; six stepchildren; many stepgrandchildren and great-grandchildren; and several nieces and nephews.
She was preceded in death by her parents; her husbands, Gerald Schott and Alonzo Ksiazek; her daughter, Genelle Clements; three half brothers, Vernon, Dale and Delbert Whited; her stepfather, Myron Ward; a stepson/son-in-law, Jerry Ksiazek; and granddaughter, Brandy Hughes.
To plant trees in memory, please visit our Sympathy Store.
Published by The Grand Island Independent on Jun. 9, 2021.
MEMORIAL EVENTS
Jun
14
Funeral service
10:30a.m. - 11:30a.m.
Central City United Methodist Church
2601 18th Ave, Central, Nebraska 68826
Funeral services provided by:
Solt-Wagner Funeral Home
MEMORIES & CONDOLENCES
Sponsored by Solt-Wagner Funeral Home.
1 Entry
So sorry and sad to hear of Della Mae´s passing. The past few years she and my mom were in the same wing and neighbors at Cottonwood Estates. Had many nice visits with her and Gordon and loved listening to her play her organ. RIP Della Mae. Hugs and prayers to the family
Nancy (Douglas)Stofferahn
Friend
June 14, 2021