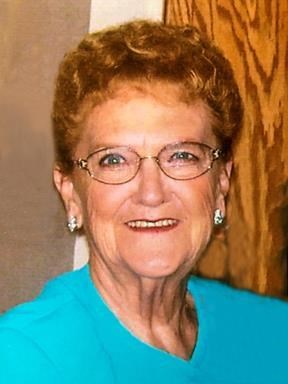 BORN
June 11, 1931
DIED
November 13, 2020
Ermagene F. Hiser, 89, of Grand island passed away on Nov. 13, 2020, at Tiffany Square Care Center.
A celebration of life service will be held at a later date. All Faiths Funeral Home is entrusted with arrangements.
Ermagene was born on June 11, 1931, in Sargent to Elmer and Hazel Brechbill. She was raised and received her education in the Sargent area.
On Aug. 17, 1947, she was united in marriage to Richard Hiser. Following their marriage, they lived in Burwell before moving to Arkansas and later to Grand Island. Three children were blessed into this union.
Ermagene was a member at the Evangelical Free Church in Grand Island. In her spare time, she loved playing cards, coloring and doing puzzles. Bingo, however, was her favorite. She also enjoyed caring for her horses and dogs. Ermagene was a diehard Husker fan. She cheered them on and always thought they did great even if they lost. Her room at Tiffany was decorated with Husker deco and family photos.
Those left to cherish her memory include her children, Lana and Charles Staab, Tammie and Kevin Heuer; daughter-in-law, Judy Hiser; six grandchildren; three stepgrandchildren; 10 great-grandchildren; and nine step-
great-grandchildren.
Ermagene was preceded in death by her husband, Richard, and son, Ricky Hiser.
Memorials are suggested to the family. Online condolences may be left at www.giallfaiths.com.
To plant trees in memory, please visit our Sympathy Store.
Published by The Grand Island Independent on Nov. 22, 2020.
MEMORIAL EVENTS
No memorial events are currently scheduled.
To offer your sympathy during this difficult time, you can now have memorial trees planted in a National Forest in memory of your loved one.
Funeral services provided by:
All Faiths Funeral Home
GUEST BOOK
4 Entries
My heart goes out to you all. Ermagene was a very special lady who always made you feel special. She always gave you a compliment even if she was not feeling the greatest. She will definitely be missed. Rest in peace pretty classy lady.
Kelly Lahm
November 23, 2020
So enjoyed being a greeter at church with your mother. She was always so pleasant and up beat. Yes she loved her horses that we talked about. My daughter showed horses with one of the daughters and she remembered it.
Barb Garrison
November 22, 2020
I remember how good friends Mom and Dad were with your folks! You are all in my thoughts and prayers! With deepest sympathy
Cindy Burnham Kenton
November 22, 2020
The Geer family offers its deepest sympathy to all of the family on this loss of your loved one. Again our sympathy. Bob Geer.
Bob Geer
November 22, 2020