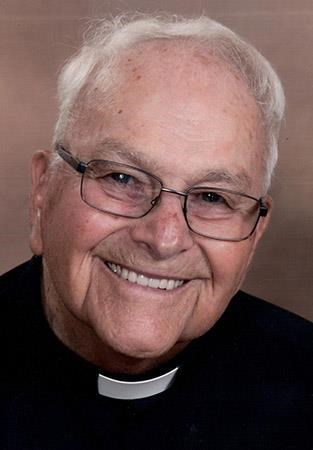 BORN
February 17, 1926
DIED
January 21, 2021
SPALDING - Rev. James E. Murphy, 94, retired priest, beloved brother, uncle, and a very loved and important part of the communities of Spalding and Ericson, passed away on Thursday, Jan. 21, 2021, at his home in Spalding.
A Mass of Christian curial will be 10 a.m. Friday, Jan. 29, at St. Michael's Catholic Church in Spalding, with Bishop Joseph G. Hanefeldt. Rev. Antony Thekkekara, and Rev. Joseph Hannappel officiating. The mass will be livestreamed at www.facebook.com/FamiliesInFaithCatholic/. Interment will follow at St. Michael's Cemetery in Spalding, with military rites by American Legion Post No. 299 of Spalding.
Visitation will be from 4 to 7 p.m. Wednesday, with a 7 p.m. rosary at St. Theresa's Catholic Church in Ericson. An additional visitation will be held from 1 to 7 p.m. Thursday at St. Michael's Catholic Church in Spalding, with a 7 p.m. wake service.
Those attending the services will be expected to comply with current COVID-19 DHMs in effect, including social distancing and the required use of face masks.
Rev. James Edward Murphy, the fifth of seven children born to James Emmett and Margaret (O'Brien) Murphy, was born Feb. 17, 1926, at Spalding, and was raised on a farm northeast of Spalding. He was baptized and confirmed at St. Michael's Catholic Church in Spalding and attended Spalding Academy, graduating in 1943. Following high school, he tried his hand at farming, the hotel business and even worked for the railroad, prior to entering the United States Army in 1945.
Following an honorable discharge in 1947, Jim Murphy found his calling and enrolled in classes at St. John's Seminary in Little Rock, Ark. He graduated and was ordained on May 3, 1955, and said his first Mass in his home parish in Spalding, surrounded by family and friends. His first assignment was as assistant pastor at St. James in Kearney.
His various assignments from 1961 to 1993 had him serving parishes, missions, summer youth retreats, Catholic Daughters, and deaneries in western and central Nebraska communities including: Mitchell, Morrill, Alliance, Chadron, Scottsbluff, Lyman, Bayard, Ainsworth, Wood Lake, Valentine, St. Paul and Wolbach.
In 1993, Rev. Murphy retired from full-time ministry to his family farm near Spalding, to farm with his brother, Clete, which brought him great joy. As a part-time priest, he continued to celebrate weekend liturgies at St. Theresa's in Ericson, co-teaching RCIA classes, along with concelebrating many wedding, funeral and other special masses at St. Michael's in Spalding and other various parishes. In 2019, Rev. Murphy, along with his family, received the Aksarben Pioneer Farm Award at the Greeley County Fair for continuing to own the farm their parents purchased for 100 years continuously, which gave him much pride.
Rev. Murphy had a love for travel which took him on trips across the United States, to Alaska and abroad to Holland, Leaning Tower of Pisa, the Swiss Alps, on a cruise down the Rhine River, New Zealand, Egypt, Australia, England, Panama Canal and five trips to his beloved Ireland. Many of his travels included his passion for Mexican food and music, as well as polkas.
He is survived by one brother, Mike Murphy of California (who subsequently passed away in the hours following Rev. Murphy's death); many nieces, nephews, cousins, great-nieces, great-nephews, many special friends, neighbors and community members; and his brother priests, along with all of his brothers and sisters in Christ.
Rev. Murphy was preceded in death by his parents, James and Margaret Murphy; three brothers, Eugene, Cletus and Frank Murphy; and two sisters, Mary Alice McCarthy and Noreen Kearns.
Memorials are suggested to the donor's favorite charity.
Levander Funeral Home of Spalding is in charge of the arrangements. Condolences may be sent to the family at www.levanderfuneralhome.com.
To plant trees in memory, please visit our Sympathy Store.
Published by The Grand Island Independent on Jan. 24, 2021.
MEMORIAL EVENTS
Jan
27
Visitation
4:00p.m. - 7:00p.m.
St. Theresa's Catholic Church
, Ericson, Nebraska
Jan
27
Rosary
7:00p.m.
St. Theresa's Catholic Church
, Ericson, Nebraska
Jan
28
Visitation
1:00p.m. - 7:00p.m.
St. Michael's Catholic Church
, Spalding, Nebraska
Jan
28
Wake
7:00p.m.
St. Michael's Catholic Church
, Spalding, Nebraska
Jan
29
Mass of Christian Burial
10:00a.m.
St. Michael's Catholic Church
, Spalding, Nebraska
GUEST BOOK
4 Entries
Fr. Jim's service in Alliance, the parish and St. Agnes Academy blessed many years of my childhood. His compassion and humor definitely reflected his Irishness. I have always had the fondest memories of his presence in my life and communities. A wonderful priest and a damn fine man. Chris
Christopher Sean Brittan-Powel
January 28, 2021
Rev. James Murphy, an incredible soul. He was our neighbor in Alliance, Nebraska. His smile was amazing. When he moved away, we kept in contact. Our family always looked forward to the Christmas letter. My son and I even surprised him by attending a church service at Erickson. I was raised in the Methodist Church, but sometimes attended the Catholic Church. My sympathy to all Rev. Murphy´s Family. I will forever be grateful for his friendship.
Joan Farley Corman
January 28, 2021
JimAnd Laura Deist, formally of Kearny Nebraska now residing in Rawlins Wyoming Thoughts and prayers to the family on the lost Father Murphy. We may have been one of the first couples he married after his ordination in Kearny, September 1, 1960 he was a great friend and a wonderful priest to all Who knew him, may he rest well
Jim And Laura Deist, formally of KearneyNebraska now residing in Rawlins Wy
January 26, 2021
So sad to hear of Fr. Jim's passing. I know he was loved by every person he met. Fr. Jim and his brother Mike were the last cousins on my Dad's family. Alice and I won't be able to physically attend his funeral in Spalding but will watch on line. .
Gerald and Alice Sullivan
January 25, 2021