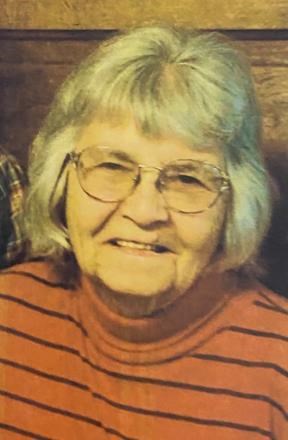 BORN
1928
DIED
2021
FUNERAL HOME
Greenway Funeral Home
802 Templin Avenue
Palmer, NE
PALMER - Mabel I. Burkhardt, 92, formerly of Palmer, passed away on Thursday, July 15, 2021, at Brookefield Park in St. Paul.
Funeral services will be at 2 p.m. on July 26 at Greenway-Dietz Funeral Home in Palmer. Pastor Ben Burkhardt will officiate. Interment will be in the Rose Hill Cemetery at Palmer.
Visitation will be one hour prior to services at the funeral home in Palmer. Memorials are suggested to the family to be designated at a later date. Greenway-Dietz Funeral Home in Palmer is assisting the family.
Mabel was born to Louie and Gladys (Verplank) Freeland in Palmer on Dec. 3, 1928. She grew up with nine sisters and two brothers in Nance and Merrick counties. She attended the Sunflower School and graduated from Palmer High School. She married her husband, Ernest Burkhardt, on April 12, 1947, in Manhattan, Kan. They were blessed with four sons. Ernie passed away on Jan. 26, 2015. Mable continued to live in Palmer and St. Paul until entering Brookefield Park in 2019.
Mabel enjoyed cooking, canning and especially her flower gardens. She was a member of the Church of God - Seventh Day of Palmer.
Mabel is survived by her four sons and spouses, Alvin and Martha Burkhardt of Central City, Roger and Wynette Burkhard of Ninilchik, Alaska, Daniel and Julie Burkhardt of Ravenna and Kenneth and Sue Burkhardt of Grand Island; nine grandchildren and five great-grandchildren; sisters and brothers-in-law, Wanda and Fred Rother of Wolbach, Minnie Rasmussen of Sun City, Ariz., Richard Henderson of Hastings, and Lois and Norman Petersen of Grand Island; and numerous nieces and nephews.
She was preceded in death by her parents; husband, Ernie; six sisters; and two brothers.
Online condolences may be directed to the family at www.greenwayfh.com.
Published by The Grand Island Independent on Jul. 20, 2021.
To plant trees in memory, please visit the Sympathy Store.
MEMORIAL EVENTS
Jul
26
Visitation
1:00p.m. - 2:00p.m.
Greenway Funeral Home
802 Templin Avenue, Palmer, NE
Jul
26
Funeral service
2:00p.m.
Greenway Funeral Home
802 Templin Avenue, Palmer, NE
Funeral services provided by:
Greenway Funeral Home
MAKE A DONATION
MEMORIES & CONDOLENCES
Sponsored by Greenway Funeral Home.
2 Entries
Remembering Mabel, a follower of our Saviour, Jesus Christ. I attended the Church of God (Seventh Day) for many years with Mabel and your father, Ernie. They were very kind, thoughtful people. May God comfort you at this time of loss!
Detta Holscher
Friend
July 25, 2021
I was shocked to see this obituary in the Independent... Mabel worked for my family´s restaurant in St. Paul in the 1980´s. She will be sorely missed by many friends and family
Russ Nesiba
Work
July 17, 2021
Showing 1 - 2 of 2 results