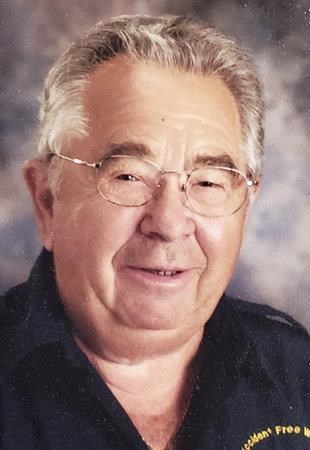 BORN
1929
DIED
2021
FUNERAL HOME
Jacobsen-Greenway Funeral Home
411 O Street
St. Paul, NE
ST. PAUL - Ruben H. Green, 91, of St. Paul passed away peacefully in his sleep on July 3, 2021, at Azria-Health Rehab Center in Grand Island.
Committal services will be at 10:30 a.m. Friday, July 23, at the Elmwood Cemetery in St. Paul. Jay Towell will be officiating. In lieu of flowers, memorials are suggested to the family. Jacobsen-Greenway-Dietz Funeral Home in St. Paul is assisting the family.
Ruben was born Nov. 18, 1929, to Henry and Alice (Cain) Green at home in Bayard. Ruben was a loving son and helped his family in so many ways. He farmed with his father and mother until their passing. He raised cattle, was a seed corn dealer and later an over-the-road truck driver, as owner/operator for Grand Island Express. Upon retiring from trucking, he worked as a greeter at the North Walmart, which he loved. He enjoyed meeting people and making new friends. He was a people person that never knew a stranger and would visit with everyone.
He is survived by his loving partner of more than 35 years, Shirley Klinginsmith of St. Paul; a daughter and her three children; his son's two children whom he was close to, Shaina Green-Stricker of Scottsbluff and Stefanie Green Ramirez of Gering; his son's four grandchildren; as well as his son's six great-grandchildren; his loving stepchildren, who were his family in St. Paul, Debra, Lona, Mark and Kim Klinginsmith; his stepgrandchildren and their spouses, Justin and Abbey Wichmann and their four children, Cedric and Rachel Wichmann and their three children, Anna and Brian Mariarty and their two children, Krystal Grothe and her child, and Kash Grothe. He loved them dearly and they loved him!
He was preceded in death by his parents; a son, Ruben Lynn; a brother, Gerald; and two infant brothers.
He had a happy, fun life and will be missed by all who knew him. God speed dear Ruben.
Online condolences may be directed to the family at www.jacobsengreenway.com.
Published by The Grand Island Independent on Jul. 21, 2021.
To plant trees in memory, please visit the Sympathy Store.
MEMORIAL EVENTS
Jul
16
Service
10:30a.m.
Bayard Cemetery
North Bayard Main Street, BAYARD, NE
Funeral services provided by:
Jacobsen-Greenway Funeral Home
MAKE A DONATION
MEMORIES & CONDOLENCES
Sponsored by Jacobsen-Greenway Funeral Home.
4 Entries
Our deepest sympathy at the death of Ruben.
Willie and Lori Skala
Friend
July 22, 2021
For several years I worked with Ruben at North Walmart in Grand Island. We had great times visiting. I've missed seeing him, and Shirley, since we both retired. Condolences and love to Shirley and his family.
Mary Anne Hinchey
Work
July 21, 2021
Condolences to family and to Shirley Klinginsmith, who he was particularly closed to and loved. I known him as a kind person and would help others in need.
Terry Steffey
July 14, 2021
Thoughts and prays are with you.
Jerry and Kathy Hengen
Work
July 11, 2021
Showing 1 - 4 of 4 results