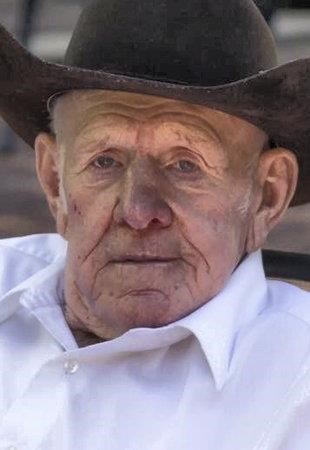 BORN
1933
DIED
2021
MARTELL - Stuart Baker, 87, of Martell entered the arms of the Lord surrounded by his three daughters, Beth, Bonnie and Julie, on Sept. 23, 2021.
Stuart began his earthly journey, Dec. 7, 1933, at the family farm and home where he grew up six miles east of Ericson. He was the son of Gilbert and Adala (Peterson) Baker. He graduated from Ericson High School in 1951 and worked on the family farm until he joined the Army in 1955.
He served his country for two years and came back to the family farm in 1957. The following year, he married Linda Lucille Fisher on Nov. 30, 1958. Born to them were four daughters Beth, Bonnie, Stacy and Julie. They raised their family on a farm and ranch two miles east of Ericson. During this time, he and Linda also took in two foster sons, Gary Harper of Omaha and Jim Sheldon of Centralia, Wash.
When he wasn't in the field or checking cows, he and Linda were busy teaching their daughters how to ride, care for and saddle their horses. He drove a lot of miles pulling a trailer while taking his girls to 4-H horse shows. After many years of farming and ranching, he began working at Foxley Cattle Co. near Chambers, Neb., in 1987.
Stuart and Linda later were divorced in 1997 and Stuart moved to Wahoo. He spent many years living in Wahoo working for ME Collins Contracting Co. and married Beverly Fujan in 2005. They were together until 2019 and spent many years enjoying family gatherings and taking trips. During those years, he also was able to spend more time with his children and grandchildren while being able to attend their school and music events. Stuart was very loved by his family, friends and all who knew him.
His greatest joy was simply connecting and talking to people. He especially enjoyed taking short trips and going places while meeting folks he encountered on the way. He never knew a stranger and had a smile, charm, charisma and wit that made a lasting impression on every person who met him, young or old. It did not matter if he was on the street in a big city like New York or on a dirt road out in the middle of nowhere near a small Nebraska town. Striking up a conversation with a stranger and making a fast friend was one of his greatest gifts. He also enjoyed any party or gathering where he could catch up with friends and family and he was always the life of the party. Family reunions were an annual occurrence and he instilled a love and appreciation for people, family legacies and history into his children through the attendance of these events.
Having a cup of coffee at the local coffee shop or Burger King, talking to his buddies about the weather, what the crops were doing and the local news of the day was also a favorite past time.
Stuart also loved music and especially enjoyed the sounds of Waylon Jennings, Willie Nelson, Johnny Cash and the Glaser Brothers who he grew up with. He enjoyed performing with his daughters, brother George and nephew Steffan while singing for many church services, funerals and events together. Stuart was also an amazing dancer and if his daughters weren't around to dance with him, he had no trouble finding a partner who always appreciated his smooth way of gracing the dance floor to a good ole country western song. He was well-known wherever he went and his children were very used to being identified as "one of Stuart Baker's daughters."
Stuart spent the last two years of his life being cared for by his daughter Beth (Baker) Schwimmer and son-in-law, Terry Schwimmer. During that time, he enjoyed visits by family and friends and his caregivers through Home Instead and Tabitha. He also enjoyed the company of two little ornery puppies, Andy and Bo.
He is survived by his daughters, Beth (Terry) Schwimmer, Bonnie (LaVerne) James, ahd Julie Baker; sister, Corinne (Russell) Howe; nine grandchildren; nieces and nephews.
He was preceded in death by his parents; daughter, Stacy Lynn; granddaughter, Megan Lynn James; sister, Shirley Jipp; and brother, George Baker.
Two celebrations of Stuart's life have been planned. One will be at 10:30 a.m. Friday, Oct. 1, at the Wahoo United Methodist Church, 714 N. Beech St., in Wahoo. The other will be at 10:30 a.m. Saturday, Oct. 2, at the Ericson United Methodist Church, 101 Michigan Ave., in Ericson. Military honors will be held outside of the Ericson Methodist Church immediately after the service. Inurnment will be in the Ord Cemetery with his daughter Stacy at 1:30 p.m.
At the request of the Baker family, there will be no public viewing/visitation. Stuart's wishes were to be cremated.
Published by The Grand Island Independent on Sep. 28, 2021.
To plant trees in memory, please visit the Sympathy Store.
MEMORIAL EVENTS
Oct
1
Celebration of Life
10:30a.m.
Wahoo United Methodist Church
714 N. Beech St., Wahoo, NE
Oct
2
Service
Military honors will be held outside of the Ericson Methodist Church
NE
Oct
2
Service
10:30a.m.
Ericson United Methodist Church
101 Michigan Ave., Ericson, NE
Oct
2
Inurnment
1:30p.m.
Ord Cemetery
NE
MAKE A DONATION
MEMORIES & CONDOLENCES
1 Entry
We are so sorry for your loss. May God be with your family at this time and help you go through this. With sympathy Rich and Linda Hoaglund
Linda Hoaglund
September 28, 2021
Showing 1 - 1 of 1 results