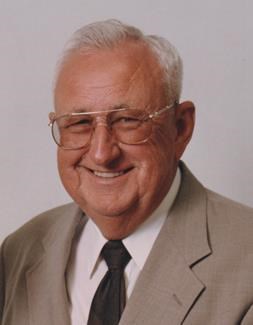 BORN
May 5, 1929
DIED
November 19, 2020
Victor "Vic" Gosda, 91, of Grand Island passed away Thursday, Nov. 19, 2020.
Private family graveside service will be in the Grand Island Cemetery. Daniel Naranjo will officiate. Military honors will be rendered by the U.S. Army and United Veterans Honor Guard.
All Faiths Funeral Home is entrusted with the arrangements. Memorials are suggested to the family for future designations.
Vic was born on May 5, 1929, near Lenora, Okla., the son of Fred and Emma (Niemoth) Gosda. In 1935, Vic moved with his family to the farm where his mother was born, six miles northeast of Grand Island. He lived here for three years and attended Hall County District School 56, the same as his mother. The family then rented a farm on Shoemaker Island, south of Wood River. In 1943, the family moved into Grand Island where Vic attended high school.
He served in the U.S. Navy and after being discharged, enlisted in the U.S. Army Reserve and later was called to active duty in the U.S. Army in the Korean Conflict, where he received the Purple Heart.
Victor married Leola May Wilson on Dec. 10, 1950, at Grand Island. When first married, Vic drove truck for OP Skaggs for seven years; he was manager of the produce for the next six years. Vic then operated a Mobile Gas Station for a year and a half and owned and operated the B & M gas station for four and a half years on the corner of Capital and Highway 281 in Grand Island, with his wife doing the bookkeeping. They purchased a self-service car wash on West Second Street and later opened the Gosda Self Service Car Wash on South Locust.
During semi-retirement, both Vic and Lee enjoyed their grandchildren, fishing, camping and traveling.
Those left to cherish his memory are his wife of almost 70 years, Leola "Lee"; their children, Alvin (Cindy) Gosda and Jack (Ann) Gosda; grandchildren, Amanda (Tony) Christian, Rick (Heather) Gosda, Ted (Carisa) Gosda, Stephanie (Bill) Gosda and Jessica (Eric) Tenkorang; great-grandchildren, Maddie, Molly, Adella, Norah, Skyla, Afia and Amara; and special friends, Mike and Sandy Williams.
He was preceded in death by his parents and eight brothers and sisters.
To plant trees in memory, please visit our Sympathy Store.
Published by The Grand Island Independent on Nov. 21, 2020.
MEMORIAL EVENTS
No memorial events are currently scheduled.
To offer your sympathy during this difficult time, you can now have memorial trees planted in a National Forest in memory of your loved one.
Funeral services provided by:
All Faiths Funeral Home
GUEST BOOK
5 Entries
Victor is missed by all residents of Sagewood community as the "puzzle man". He always had a puzzle in progress and a kind word for all. God bless his family.
Paul * Melba Kuntzelman
December 7, 2020
I´m so sorry to hear of Vics passing. He was a character, and my memories of him are fond. I helped he and Lee while I was employed at Primrose. Your families are in my thoughts.
Lynn Gipe
November 22, 2020
Vic was a joy to be around. He was loving caring and always expected the best from everyone! I will miss him!!
Randi Pennell
November 21, 2020
My sympathies to the Gosda family. I remember meeting Vic when I babysat for Alice and Lloyd Gosda.
Twylla Tibbs Crosby
November 21, 2020
We rented a home from Vic and his Wife. They were Awesome and very fair landlords. Thank You Mr. Gosda.
Bonita Tech
November 21, 2020