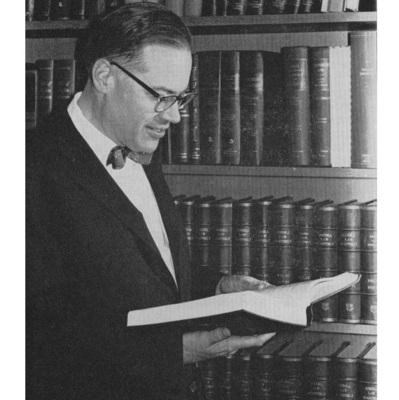 Gray Thoron, Professor Emeritus and former Dean of the Cornell Law School died peacefully at his home at the Kendal at Ithaca in Ithaca, NY Friday, Sept. 18, 2015. He was 99.

His career as a teacher spanned nearly 40 years, interrupted only by two years as an Assistant to the Solicitor General in the Justice Department under President Eisenhower in the mid-1950's. He was much beloved and respected by his students. For many years he taught courses in Legal Ethics, Professional Practice and Professional Responsibility. He could perhaps best be described as a "law student's professor". He had great compassion for the pressures that compelled many students to enroll in the Law School. He frequently brought home final term papers to grade and would characterize a particular student by the style of his writing as a "frustrated sportswriter" or as a "frustrated poet" who might well prefer to be composing verse between sips of absinthe at a Left Bank café in Paris. A signature of his deanship and afterwards was bringing together students and faculty for frequent parties and other informal social gatherings at his Highland Road home, for which they were deeply appreciative. Occasionally, he brought to the house students who were far from their own homes to partake of a holiday dinner. Late into his retirement he continued to receive letters and cards from former students expressing their gratitude for his hospitality and for his inspiration in the classroom. Soon after his retirement, a former student established a scholarship fund in his name.

Gray Thoron was born at home in Danvers, MA on July 14, 1916, the older of two children of Louisa Chapin (Hooper) and Ward Thoron, a lawyer and businessman, in a house with a bullet hole in the front door dating from the Revolutionary War. He was educated at the Browne & Nichols School in Cambridge, MA and at St. Paul's School in Concord, NH. In 1934, he entered Harvard College and graduated in '38 with honors as an American History major. In his senior year he was manager of the varsity baseball team. The next year he entered the Harvard Law School where he received his LL.B with honors in '41. After graduation, he went to work for the Wall Street law firm of Sullivan & Cromwell in New York City. He was there for only a few short months before the bombing of Pearl Harbor. He was one of only two lawyers at the large firm to enlist the next day. He was formally inducted a few months later and served for the duration of the war as a combat infantryman in an armored brigade with the rank of lieutenant and later as Company Commander. He was seriously wounded leading an assault on the Siegfried Line, for which he received the Purple Heart with cluster. He was also awarded both the Bronze and Silver Stars. He continued to serve in the Army Reserves for several years.

After the war, he returned to the practice of the law as a litigator for S&C. However, he soon found courtroom procedure increasing difficult to follow due to the loss of hearing in one ear from his wartime injuries, and decided upon a teaching career. In 1948, he entered academia as an Associate Professor of Law at the University of Texas Law School and remained there until 1954. He left the Justice Department in 1956 after a two-year stint, during which time he successfully argued a number of cases for the government before the U.S. Supreme Court, to accept the deanship at the Cornell Law School.

As dean, he made the building of a top quality faculty and a substantial increase to the endowment and in alumni giving the hallmarks of his tenure. Under his leadership he considerably expanded the physical plant, most notably with the construction of the Charles Evans Hughes law residence center. He inaugurated a visiting professorship program and revitalized the guest lecture series that brought to the School distinguished speakers in government and the legal profession, among them Supreme Court Justice William O. Douglas and U.S. Atty General William P. Rogers, and many others from around the globe. He sought to strengthen the curriculum with subjects that stressed legal philosophy, legal history, comparative law, and public and international law. He initiated an aggressive national recruitment program to reverse the declining student enrollment. In 1960 he launched the Cornell Legal Aid Clinic under the supervision of a local practicing attorney and graduate of the Law School to give advanced students practical experience working directly with indigent clients.

In addition to his administrative and teaching duties he was named to a committee to investigate and reform the State of New York's antiquated commitment laws. The findings of this two-year long study, published in two volumes, were accepted and their final recommendations implemented to reflect the new federal policy calling for the de-institutionalization of state hospital patients and for stricter legal safeguards. He was one of three members of the Laporte Commission on Legislative Ethics appointed by the NY State Legislature, and in 1965 he was made a New York State Special Assistant Attorney General. During this time he was kept on retainer by the State of NY to argue cases before the U.S. Supreme Court. He stepped down as dean in 1963 and continued to teach before retiring in 1987 at the then mandatory retirement age of 70.

In June 1939 he married Mary Dwight Clark of Dublin, NH and together they raised 3 daughters and 2 sons. They were divorced in 1968. He was married for a second time in December 1971 to Pattie Porter Holmes of Atlanta, Georgia. They had met the previous summer on a North Cape cruise ship. They enjoyed 29 years of married life, sharing a passion for travel and sports until her death in 2000. They rarely missed a home Cornell football or hockey game. They were also avid fans of the NY Giants and Atlanta Braves. Both were longtime devoted congregants of the First Presbyterian Church of Ithaca.

A lifelong Republican, he had an abiding interest in the American political process. In 1952 he served as a member of the Texas delegation at their national convention. He may have had some in the hall scratching their heads whenever he stood up to speak on their behalf in a pronounced Boston accent. He was a good friend and supporter of the late former NYC Mayor John Lindsay from their days working together at the Justice Dept.

He was a member of both the NYC and NY State Bar Associations, long chairing the latter's Ethics Committee, and the American Bar Association. For many years he regularly attended ABA annual meetings and reveled in the collegial atmosphere and company of his fellow guild members. He found relaxation and congenial company in the several clubs to which he belonged. He was a member of the Somerset Club of Boston and the Harvard Club in New York City, where he was also a longtime member of the Century Association.

A memorial service is planned for later in the fall. Burial will be private. Donations in his memory can be sent to the Gray Thoron Scholarship Fund at the Cornell Law School or to the Dementia Society of America.

Published by Ithaca Journal on Sep. 26, 2015.
To plant trees in memory, please visit the Sympathy Store.
MEMORIAL EVENTS
To offer your sympathy during this difficult time, you can now have memorial trees planted in a National Forest in memory of your loved one.
MAKE A DONATION
MEMORIES & CONDOLENCES
3 Entries
I will always appreciate that he took an interest in me personally and gave me sage career advice.
Jim W Cornell Law 1969
Jim W
December 31, 2015
Molly
condolences for yr dad, still remember meeting him in London. trust yr doing well, jon
[email protected]
October 30, 2015
Rest in peace Professor Thoron. Thoughts and prayers are with his family.
Lorraine (Lorie) Pruitt
September 28, 2015
Showing 1 - 3 of 3 results