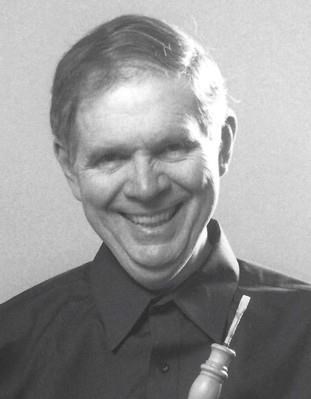 - - Peter Jay Hedrick, 81, died on May 13 after a long, brave struggle with Pulmonary Fibrosis.

Peter was born in Manhattan, Kansas, on November 15, 1937, to the late J Eldred Hedrick and the late Mary Ellen Love Hedrick. The family moved to Concord, California, when Peter was three, then to Jamaica, Queens, where Peter attended sixth grade. The next year they moved to Ithaca, where Peter and his sisters graduated from Ithaca High School. Peter received a Bachelor of Music from Oberlin College, where he met his future wife, Libby. They were married at St. John's Episcopal Church, Charleston, West Virginia, in 1961. Peter received a Master of Music from Yale University. Peter was the oboe teacher at Michigan State University from 1961 until 1963 then taught at Ithaca College until 1991. During Peter's first sabbatical, he and Libby went to Europe to study the historical forms of their modern instruments. Peter left Ithaca College to found (with his wife, Libby) New York State Early Music Association, the legal entity behind NYS Baroque, now successfully in its 30th year! Peter was a true Renaissance Man: musician, teacher, scholar, historian, gardener (In the early day of Loaves and Fishes, Peter supplied them with garlic), and chef. Peter studied theology and languages (each day in Lent he read the psalms or The Passion in either French, German, or Spanish). He was a member of St. John's Episcopal Church, Ithaca, NY, having served on the vestry several times, and served there as a Lay Eucharistic Minister. Peter is the author of numerous articles and two books: An Early Hautboy Solo Matrix, and A Musician's Literary Sourcebook, which has yet to be completed.

Peter was at peace with his journey toward the end of his days. As he so often said, "After 40 years of gardening, I feel very much a part of the cycle of life." So much brilliance and talent wrapped up in such a gentle and unassuming man. He was beloved by all who knew him. Peter was well named, as he was indeed our rock. May angels lead him to Paradise.

Peter's sister Kate writes, "Words don't begin to express what a life of grace our beloved Peter has lived; so filled with music, stewardship of the earth we are privileged to walk, each of us for a time, a deep sense of social justice, and so loving of Libby and his family."

A Solemn Requiem Mass will be celebrated Saturday, June 8, at 11:00 a.m., at Saint John's Episcopal Church, 210 North Cayuga Street, Ithaca, NY. Herson Wagner Funeral Home is in charge of the arrangements. Memorial gifts may be made to St. John's Church, Ithaca, NY or to NYS Baroque.

I'm sorry for your loss. May God bless and comfort you and your family during this difficult period; please accept my sincere condolences.
Carin Rundle
May 16, 2019
Dear Libby:
What little I knew of Peter, he impressed me so very much; it was if I had known him all my life - as I have you.
Now he is planting his garden beside the still waters and waiting for others to join him at that big table for a Last Supper.
May you and your girls rest peacefully knowing his journey has passed and he has left all of you something of him to keep in your hearts.
Pax Wobiscum for ever and ever. Amen
Barbara Snyder
May 15, 2019
Showing 1 - 3 of 3 results