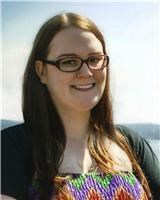 She was born on April 11, 1987, in Newton, the daughter of Douglas and Christina (James) Selzer. Kellie graduated from Newton High School in 2004, shortly after which she moved to the Seattle, Wash., area, where she attended the Art Institute of Seattle to pursue her dream of being a freelance photographer.

Kellie began working at the Experience Music Project in Seattle, where she met David Doyle, the love of her life. They were married Oct. 11, 2013, in Wichita.

Kellie loved music and animals. Her love of children led her to work as a nanny. She was a leader with the Washington State Ehlers-Danlos Syndrome Support Group, where she had grown the organization's membership and she mentored many others worldwide. Kellie also served on the Virginia Mason Hospital Patient Advocacy Organization. Kellie was passionate about empowering others to fight for - and receive - the quality medical care they deserve. Helping others was a major desire in her life.

Survivors include her husband, David of the home in Shoreline; parents, Douglas and Christina Selzer of Newton; brother, Eric Selzer of Wichita; grandparents, Lois Selzer of Hesston, Lucy James of Wichita, Michael James and his wife, Lois Misegadis of Newton; great-grandmother, Micaela A. Galvan of Newton; and two of her cousins who were a special part of her life, Makala and Mariah James. Also surviving are her in-laws, Mark and Susan Doyle of El Dorado Hills, Calif.; and sister-in-law, Katie Doyle of Sacramento, Calif.

Memorial services will be at 3 p.m. Monday (Jan. 13, 2014) at the Broadway Colonial Funeral Home. As per Kellie's wishes, cremation has been effected.

In lieu of flowers, a memorial has been established with the University of Washington E.D.S. Research. Contributions may be sent to Broadway Colonial Funeral Home, 120 E. Broadway, Newton, KS 67114.

Condolences may be left at www.broadwaycolonialfh.com.

someone who cares
January 24, 2014
May God comfort the entire Doyle family. Is.61:1,2
Lene
January 15, 2014
My Goddaughter (niece) died of EDS at the age of 23. We had never heard of this disease at that time. Know that Kellie was carried home in the arms of the Angels.
Jean Lampman Jones
January 14, 2014
So sorry for your loss..This disease has took so many. EDS took my daughter's life when she was only 21 yrs old..prayers are sent to your family.
valerie myers
January 14, 2014
I am so sorry you lost your beloved wife, daughter, granddaughter, sister, cousin and friend. Her light will continue to shine through those she loved and helped. My thoughts and prayers are with you at this time. Our family has VEDS too.
Susan Ginley
January 14, 2014
Blessings and thanks from the EDS community of Columbia, Mo. Our hearts go out to you!
Lorrie Ney
January 14, 2014
I only met this amazingly strong, beautiful, caring and bright woman once at the EDS support group in Seattle. I was instantly drawn to her bright personality and outlook on life. She helped me gain information and knowledge about doctors since I was knew to the area. We exchanged our own health stories and found connections we both had in our ever growing medical experience. It was a pleasure knowing her however brief. She made an imprint in my life and I'll never forget this amazing woman.
Tawnee Kammer
January 13, 2014
Having just been through this myself, words cannot take away the pain. It is the hardest thing you as a parent can ever go thru. But, please think she is better off with no pain. It won't help ease your pain. Try to take it day by day. Our 27 yr. old daughter died in Oct. from a massive heart attack. She was diagnosed with EDS. She tried to educate all us.
Leanne Harman
January 12, 2014
My heart and thoughts are with the family <3 Sleep peacefully xx
Korky Pascoe
January 12, 2014
God knows every detail about us and rest be assured he remembers Kellie.
"..Even the hairs of your head are numbered."
~ Matt. 10:30
Nicole D
January 12, 2014
I am very sorry for your loss. May the "God of all comfort" bring you peace during this troubling time.
January 12, 2014
My Thoughts and prayers go out to the surviving Family...
Nina Daniels
January 11, 2014
My sincere condolences. It breaks my heart to know that we have lost such an amazing member of our zebra herd. May she fly high and her memory always burn bright. -The Medically Me Team
Kassady Oberacker
January 11, 2014
I knew of Kellie through my daughter, Tawnee Kammer. They met last fall at the EDS Support Group meeting. Although their friendship was recent, Tawnee spoke about Kellie with much warmth and admiration and considered her a very special person. My heart goes out to all of you. Blessings...
Mellanie Pierce-Bend, OR
January 11, 2014
Chris, Doug, Eric and David you all are in my thoughts and prayers.
Shanna Quiring
January 11, 2014
Showing 1 - 20 of 20 results