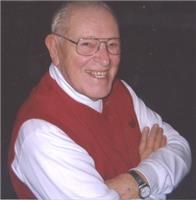 While at the University of Kansas, Rick met his wife, Janice, whom he was married to for 63 years. He received a Master's degree from George Washington University in 1965. After 23 years in the Strategic Air Command, Rick retired as a Colonel in the Air Force. He had a second career with the Christian Church (Disciples of Christ), retiring as the National Benevolent Association President in 1996. He had 20 happy years of retirement enjoying his children and grandchildren and special time in Texas with his friends and church.

Visitation will be from 6:30 to 8:30 p.m. Monday, April 25, at Mt. Moriah, Newcomer & Freeman Funeral Home, 10507 Holmes Rd., Kansas City, MO. Funeral service will be 2 p.m. Tuesday, April 26, at St. Andrew Christian Church, 13890 W. 127th St., Olathe, KS 66062. Burial with full military honors is in Pleasant Valley Cemetery in Overland Park. Memorial contributions may be made to North Central Christian Church, 1200 Evans Road, San Antonio, TX 78258.
Published by The Kansan on Apr. 23, 2016.
To plant trees in memory, please visit the Sympathy Store.
MEMORIAL EVENTS
To offer your sympathy during this difficult time, you can now have memorial trees planted in a National Forest in memory of your loved one.
Funeral services provided by:
Mt. Moriah, Newcomer and Freeman Funeral Home | Mount Moriah Cemetery Sout
MAKE A DONATION
MEMORIES & CONDOLENCES
3 Entries
When I first met Rick in the early 70's he was a Lt. Col in the Air Force, I believe a navigator for the Looking Glass (you in the Air Force will know what that means) any way when both Rick and my Dad, Tom Stockdale retired, They traveled to England. They got hopelessly lost and Dad turned to Rick and said "If only we had a navigator." They shared that kind of humor. Rick was compassionate, caring, kind. Rick was a friend.
Pamela Milley
Friend
April 18, 2019
My Dear Friend Rick Lance, Had a laugh that rolled and rocked the house, infectious, contagious. I was blessed to have known him, to have him pray with me when he entered hospice,to march the band and strike it up in the 70's in front of his house, to have him been apart of my life, for him to be my father's best friend.You will live forever in my memory and in my child's memory. Janice, you and Rick, I can't imagine life with out you.
April 25, 2016
Such a genuinely kind and good man who will be missed by so many. It was an honor to know him. Much love to the Lance family.
Holly Newton
April 23, 2016
Showing 1 - 3 of 3 results