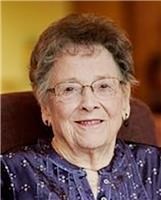 BORN
1928
DIED
2021
FUNERAL HOME
Elliott Mortuary & Crematory - Hutchinson
1219 N. Main
Hutchinson, KS
Ruth M. Yutzy, 92, went to be with her Heavenly Father on March 2, 2021, at Mennonite Friendship Communities, South Hutchinson, Kansas. Ruth Marilyn Roupp was born March 18, 1928 to John and Lillie (Balmer) Roupp in Newton, Kansas. She was the middle of five children. Ruth grew up and spent her childhood in rural Hesston and attended the Hesston Academy. After college she taught school in a rural schoolhouse, Shady Side, outside of Newton for three years.

On August 10, 1950, Ruth married Paul A. Yutzy in rural Hesston, a day so hot the candles melted before they were lit. She and Paul lived in Yoder a short time and later moved to the farm where he was raised southwest of Hutchinson. She was a homemaker for the first 20 years of their marriage, being active in church work, the school and neighborhood, always willing to provide a home-cooked meal or fruit basket forfriends or those in need. In October of 1970, the family moved to Hutchinson. About that time, Ruth wentto work outside the home for the first time since they were married. She spent many years in food service, first at Mennonite Manor and later for USD 308. Her last 24 years of service were as Director of Junior Volunteers/Volunteens at Hutchinson Hospital, a job she truly loved. For years after teens moved out of the program, many would intentionally keep in touch with her, popping into the office and sending notes or coming up to talk to her when they saw her out in public. She estimated that she had worked with more than 370 Volunteens over the years.

Ruth was a woman of deep faith, living it out in her day-to-day life. She was a faithful member of Journey Mennonite Church for 70 years, where she actively served in numerous capacities throughout the years.

Ruth's family was very important to her. She would often ask about the great-grandchildren's progress and loved being hugged and kissed by them. Her prayers covered her entire family each day.

Music was always an important part of Ruth's life. In her early years she sang in a quartet with good friends and occasionally revived the music with them and others later. She loved to play the piano, sang in an octet with Paul and enjoyed attending her family members' programs and concerts.

Ruth and Paul enjoyed traveling and were fortunate to spend time traveling to numerous places inside and outside the United States, including the Panama Canal, Europe, Alaska, and Costa Rica for their grandson's wedding.

After Ruth and Paul moved to Mennonite Friendship Communities in August 2008, she was able to enjoy the benefits of a smaller home with less housekeeping, allowing more time to do the things she enjoyed. Even there, she was involved in the residents' council and enjoyed her "neighborhood", keeping up with those in her community.

She was preceded in death by her husband on December 29, 2011, and a daughter, Ronda Kay, was stillborn on March 9, 1960. Her parents and older brothers, Willard and Milford, and her younger sister, Elda Guhr, also preceded her in death. She is survived by daughters, Sondra (Bill) Popp and Rita (Bill) Eldridge, all of Hutchinson; grandchildren Cameron Popp (Andrea Cordero), Falls Church, VA; Megan (Dustin) Miller; Cassi (David) Johnston, all of Hutchinson; and Kyle Eldridge, McPherson; greatgrandchildren Noah and Miriam Popp; Brody and Whitney Miller; Adelynn, Ava and Oliver Johnston; and brotherDelbert (JoAnn) Roupp of Colorado.

The private family service will be live-streamed at 1:00 p.m. on Tuesday, March 9, as well as being available after the service on the Journey Mennonite YouTube channel: https://youtu.be/DNt8Vehkiao.

Memorial contributions may be sent to Mennonite Friendship Communities or Central Christian School, in care of Elliott Mortuary. Friends may sign the guestbook at Elliott Mortuary through Monday, 9:00- 5:00.
Published by The Kansan on Mar. 9, 2021.
To plant trees in memory, please visit the Sympathy Store.
MEMORIAL EVENTS
Mar
9
Service
1:00p.m.
KS
Funeral services provided by:
Elliott Mortuary & Crematory - Hutchinson
MAKE A DONATION
MEMORIES & CONDOLENCES
2 Entries
My condolences to the family . May you find comfort in your treasured memories
and Gods promise to return our loved ones . 1st Thessalonians 4 : 13 & 14 .
March 6, 2021
I am sorry to hear of your loss. Please accept my condolences. May the love of God, friends and family comfort you through your grief. 2nd Thessalonians 2: 16,17
D T
March 6, 2021
Showing 1 - 2 of 2 results