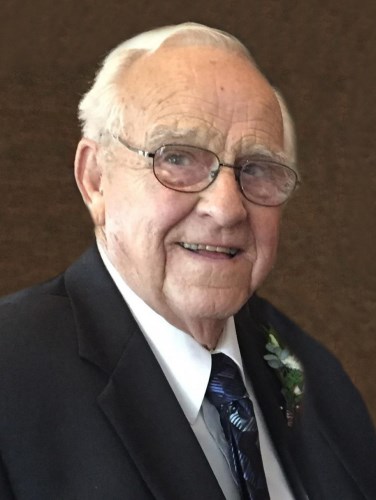 Arthur Donald Broin was born December 12, 1930, on a farm near Bombay, MN. He was the oldest of 4 children born to Arthur and Edna (Flaten) Broin. He was baptized and confirmed at Holden Lutheran Church. He attended a rural school through 8th grade, and graduated from Kenyon High School with the great class of 1949.

Don married Sarah Dyrdahl in 1951, and together they had three children, Susan, Debra, and David. Soon after their wedding, Don was drafted because of the Korean War, but after basic training he was sent to France to be part of the reconstruction in Europe.

When Don came back to the US after his service, he joined Clifford Voxland's construction business and eventually Don owned the business by himself, calling it Don Broin Contractor and Builder. He was very proud of all the projects and homes he built in the Kenyon area, and of all the customers who became good friends. Don continued to do minor jobs well into retirement.

Don was always willing to serve his community. He was an active member of the Kenyon Fire Department for around 30 years, and also served as the chief at one time. He was also an active member of the Lions Club, and served on the church council at Hauge Lutheran Church. He invested a lot of time in the restoration and maintenance of the Hauge Old Stone Church. In 2020, he was asked to be the Grand Marshal of the Memorial Day parade, which was later cancelled due to Covid.

Over the years Don enjoyed snowmobiling with friends, playing golf, and driving his speedboat for anyone who wanted to waterski. Once everyone else took turns, he also loved to waterski himself.

In 1977, Don and Sarah bought a cabin on the Gull Lake Chain (Lake Margaret) near Nisswa, MN. They owned their cabin for over 35 years, and their children and six grandchildren have wonderful memories of this place.

Don preferred to travel by car, however, after retirement he and Sarah also took great trips to Norway with their three children to visit family farms, and to Washington, DC. They also spent several winters in

He was preceded in death by his parents, Arthur and Edna Broin; brother, Harland Broin; sister-in-law, Judith Broin; and brother-in-law, George Felten.

Visitation will be at Hauge Lutheran Church in Kenyon on Monday, March 1, 2021, from 1:00 PM to 2:00 PM. Memorial services will be held Monday, March 1, 2021 at 2:00 PM at Hauge Lutheran Church in Kenyon with The Reverend Gideon Johnson officiating. Interment will be in the Kenyon Cemetery with military honors provided by the Kenyon Color Guard. The service will be available online at: https://www.wearelivetoday.com/a-donald-broin

Memorials are preferred to Hauge Old Stone Church, Hauge Lutheran Church, and Holden Park.
To plant trees in memory, please visit our Sympathy Store.
Published by The Kenyon Leader from Feb. 23 to Feb. 24, 2021.
MEMORIAL EVENTS
No memorial events are currently scheduled.
To offer your sympathy during this difficult time, you can now have memorial trees planted in a National Forest in memory of your loved one.
GUEST BOOK
0 Entries
Be the first to post a memory or condolences.