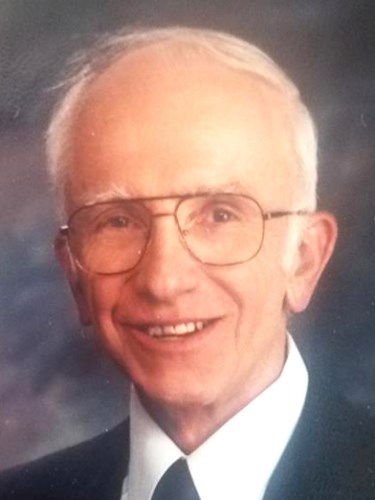 He was born April 28, 1927 in Holden Township the son of Herman and Rachel (Hostager) Voxland. He was baptized and confirmed at Holden Lutheran Church. He attended Dovre country school and graduated from Kenyon High School in 1945. He served in the U.S. Army from Oct. 2, 1946 until Feb. 4, 1948. Clifford was united in marriage to Dolores Kindseth on July 24, 1948 at Hegre Lutheran Church. They made their home in Minneapolis where he attended the William Hood Dunwoody Industrial Institute graduating in 1950 at which time they moved to Kenyon.

Cliff started a construction business, building new homes, outbuildings, additions as well as remodeling jobs. He was offered the position of Manager of the Kenyon Farmers Lumber Co. in 1957, a position he held for 35 years until his retirement on Dec. 31, 1992. He remained active doing small jobs and repair jobs at home or at church.

In his retirement, he took up artistic pursuits, including scratch art, acrylic painting, and wood carving. He loved attending water aerobics classes 3 mornings a week in Faribault and enjoyed tending his flowers and feeding the birds.

Church and community were the most important things to Clifford. He served in several capacities at Holden Church, was a Sunday School teacher, a council member, and on the property committee several times. He also served on the Kenyon City Planning Commission and was past president of the Commercial Club. He was Treasurer of the Kenyon High School All School Reunion in 1997, Treasurer of Kenyon's Sesquicentennial Celebration in 2006, and a committee member of Holden's 150th Anniversary celebration in 2006. Cliff was a humble man, never boastful, jealous, or never said a bad word about anyone or anything. He was a loving husband, father, and grandfather. He especially enjoyed his family, attending his daughter's and granddaughter's school activities and sports they were involved in. He will be sadly missed by his family.

He is survived by his wife of 72 years, Dolores; daughters Kathy (and Perry) Caron of Cannon Falls, Amy Valentine of La Crosse, WI; granddaughter, Cassandra Jo Caron of Kenyon; great-grandchildren Wyatt and Ruby; sister, Ruth Cramer; brothers and sisters-in-law, Mark and Mary Kindseth of Kenyon, Bruce and Dot Kindseth of Narragansett, RI, Jim and Shirley Cain of Pilot Mountain, NC; and many nieces, nephews, and cousins.

He was preceded in death by his parents; brothers, Gerhard and Rudolph; sister, Evelyn Sathrum Abendschein; son-in-law Michael Valentine and an infant sister.

The family would like to thank the staff at Kenyon Senior Living and Heartland Hospice for the wonderful care that Clifford received. Also, a very special thank you to Mark and Mary Kindseth who have helped with so much along this journey.

A private family service will be held with a public service to be announced later in the spring or summer.

To plant trees in memory, please visit our Sympathy Store.
Published by The Kenyon Leader from Feb. 10 to Feb. 11, 2021.
MEMORIAL EVENTS
No memorial events are currently scheduled.
To offer your sympathy during this difficult time, you can now have memorial trees planted in a National Forest in memory of your loved one.
GUEST BOOK
0 Entries
Be the first to post a memory or condolences.