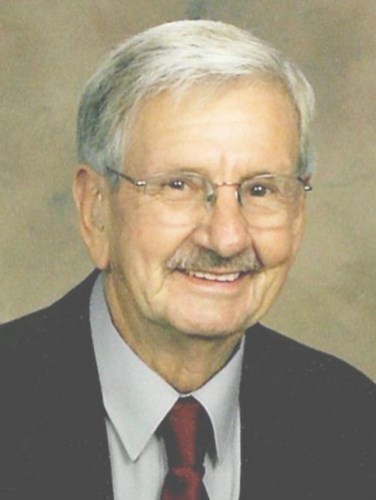 Bob, the son of Martin and Olianna (Gunderson) Dyrdahl was born October 22, 1928 in a log cabin in Monkey Valley just outside of Kenyon. He was baptized at Hauge Lutheran Church in December 1928 where he remained a life-long member. He attended country school and graduated from Kenyon High School in 1946. He grew up with three older sisters on a 160-acre farm in Richland Township in rural Kenyon.

Bob met his wife, LaVonne Magee also of Kenyon in 1954 and married in 1955 at Gol Lutheran Church in Kenyon. They enjoyed spending time with friends and Bob participated in several bowling leagues.

Along with farming, Bob worked at McQuay Company in Faribault from 1973 to 1991. He was a proud member of the Sheetmetal Workers Union Local 480. Bob and LaVonne moved to town (Kenyon) in 1987. In retirement, though-out his 70's and 80's Bob continued to stay busy, primarily by delivering papers for the Faribault Daily News and the Rochester Post Bulletin.

Over the years, Bob and LaVonne enjoyed traveling together and spent their 25th anniversary in Hawaii. They traveled to several states across the country including both coasts to visit their children. They took a cruise to the Panama Canal and a once-in-a-lifetime trip to Norway. Bob enjoyed spending time with his grandchildren and it seems the tradition of having boys carried on to the next generation with his seven grandsons and one grand-daughter. Bob was dedicated to his faith and served on the Old Stone Church Board for over 45 years which was a special place for his family.

As it was for most, 2020 was a challenging year, however Bob was grateful that his son Ross was able to come home to Minnesota to live with them and help care for him. Special thanks are also in order to Julie and Angie who consistently dropped off amazing food.

He is preceded in death by his parents, Martin and Olianna Dyrdahl; daughter, Keri Dyrdahl Smith; great-grandson, Edison; sister and brother-in-law Mildred and Virgil Lair and brothers-in-law Sam Jacobson and Jim Anthony.

A memorial service will be held at 2:00 PM Friday, April 30, 2021, at Hauge Lutheran Church in Kenyon with visitation one hour before the service. Coffee and fellowship will follow immediately at the Dyrdahl family home at 429 Third Street, Kenyon, MN.