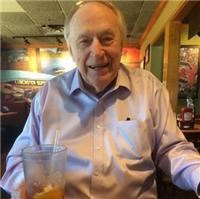 BORN
1930
DIED
2020
Marion Joe Taylor passed away Saturday, Dec. 12, 2020.
He was born March 7,1930, in Lancaster to Marion Augustus Taylor and Annie Mills Taylor.
He graduated from Lancaster High School and then joined the Air Force in 1948. After a nine-year career he went to work for Union Carbide where he spent over 20 years, starting in sales and ending up as regional sales manager for the southeast. He then started his first company MJ Taylor Chemical Company in 1975. He ran that successfully until selling in 1998. He then "flunked retirement" in 2000. He then started TayChem Industries and remained involved until his death.
He lived in Atlanta over 50 years but came back to his hometown in 2015. He started the LGSS that he also co-founded a similar program in Atlanta. His hobbies were golf and just talking to people and connecting them with other people. He never met a stranger. He was a member of Peachtree Presbyterian Church in Atlanta and Calvary Baptist Church in Lancaster.
He was preceded in death by his sons, Donnie, Dennis and Drew Taylor; his grandson, Daniel Eidson; his wife, Jane Taylor; and his brother, Jim Taylor.
He is survived by his son, David (Jolene); daughter, Denise Eidson (John); and daughter-in-law, Bonnie (Drew); 13 grandchildren; many nephews and nieces; and so many friends. He will be missed by his family and friends and anyone who knew him.
He will be cremated and interred at Arlington Cemetery in Sandy Springs, Ga.
A memorial will be held later.
In lieu of flowers, a donation in his name can be made to LGSS, Calvary Baptist, Lancaster; or to your favorite charity.
Published by The Lancaster News from Dec. 15 to Dec. 16, 2020.
To plant trees in memory, please visit our Sympathy Store.
MEMORIAL EVENTS
To offer your sympathy during this difficult time, you can now have memorial trees planted in a National Forest in memory of your loved one.
MAKE A DONATION
Please consider a donation as requested by the family.
MEMORIES & CONDOLENCES
2 Entries
Our Father enjoyed coming back home. He mostly lived in the "big city" of atlanta but always appreciated the feel of Lancaster. We were a little worried about him not being close to my sister or i. But he found so many new friends and renewed old friends where he could that it never was an issue. We loved him and will miss him.
David Taylor
Son
December 21, 2020
What a well said memorial for Marion Joe Taylor. He loved people and helping others. He is missed by so many friends and family.
I consider it my privilege to have known and loved him.
Julie Bowers
Friend
December 16, 2020
Showing 1 - 2 of 2 results