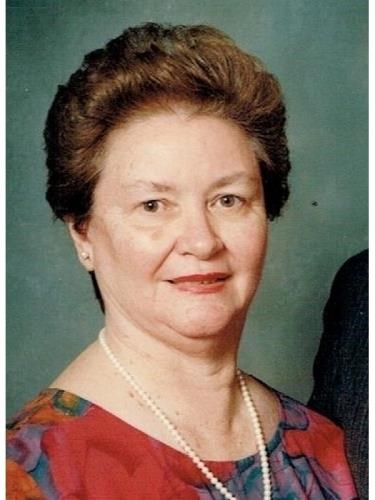 LAKELAND - Constance (nee Brooke) Ray died April 23, 2019, peacefully in her sleep. Connie was born the second of two daughters to the late Hiram Rodney Brooke and Eleanor Brooke in Boston, Massachusetts. The family moved frequently, and Connie grew up in several communities in Massachusetts and Maine. She attended and graduated from Dean Academy in Franklin, Massachusetts, where she met the man who would be her future husband. After high school, Connie graduated from Bates College in Lewiston, Maine, with a BS Degree in Biology. Connie then went to work at The Cancer Research Laboratory of the Chas. Pfizer Corporation in Maywood, New Jersey. In June of 1957, Connie married Lt. David Ray following his graduation from the United States Military Academy, at West Point, New York. For the next 24 Years, Connie was an Air Force wife living in many different states. Everywhere they went, she made new friends. Connie raised three lovely children, sometimes by herself while her husband was deployed, including the 15 months he was in Vietnam. During these years, Connie developed a love for travel. The family visited many National Parks, often sleeping in them to give kids a taste of what they were experiencing. At the same time, she was active in several volunteer organizations, including Beta Sigma Phi, a non-academic cultural, social and philanthropic sorority. This led to more lasting friends.
While they were stationed in Elizabeth City, NC, she was the Neighborhood Chairman for the Girl Scout Troops in the City. Upon moving to Altus, OK, Connie started volunteering long hours at the Base Hospital. The Chief Nurse suggested she pursue a career in Nursing. So, Connie drove 120 miles a day to the nearest college, where in 1975 she obtained her Nursing Degree and passed the test for RN. She continued her Nursing career in Cherry Hill, NJ, until her husband retired in 1981. They then moved to their final home in Lakeland, FL, where she continued volunteering at VISTE (Volunteers in Service to the Elderly.) She became an avid needle pointer, belonging to both The Embroidery Guild of America and The American Needlepoint Guild, traveling to many workshops and conferences. They also made several trips to Europe, Canada and Mexico, and a six-week trip to New Zealand and Australia.
She is survived by her loving husband of 61 years, David P. Ray; children: Sharon Burnell (Ronald) of Seaville, NJ, Susan Williams (Scott) of Orlando, FL, and Geoffrey of Lakeland, FL; grandchildren, Amanda, Melissa, Kristina, Andrew, Scott A. and Audrey; one niece and three nephews. She was preceded in death by her sister, Janice Elizabeth Brooke Green Woodward.
A Requiem Mass will be said at St Mary's Anglican Catholic Church, 2200 Winter Lake Road, Winter Haven, FL, on Friday, May 10, 2019 at 11:00 am. Final interment will be at The United States Military Academy at West Point, NY, at a later date.
Condolences may be sent to the family at www.heathfuneralchapel.com