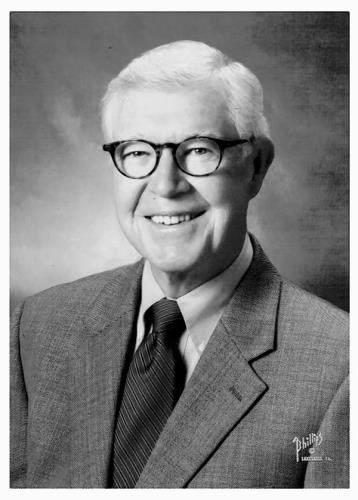 LAKELAND - James Larry Durrence passed away on Thursday, February 20, 2020 in Lakeland. Larry was born in Glennville, Georgia on August 22, 1939 to James Levy and Frances Merrett Durrence, and the family moved to Florida when Larry was 8 and eventually settled in Lakeland where he graduated from Lakeland High School. He earned his Bachelor of Arts degree from Florida Southern College in 1966 and a master's degree in 1968 and his Ph.D. in American Diplomatic History in 1971 from the University of Georgia.
Larry spent most of his professional career in higher education and government. He was a professor of history and political science at Florida Southern College from 1970-1990 and served as Chair of the Department of History and Political Science for five years. It was during his tenure at Florida Southern that his interest in historic preservation led to an interest in city politics, and he was elected to the City Commission in 1980. He served a total of eight years on the Commission, including two terms as mayor in 1982 and 1986. During his time on the City Commission, Larry served as President of the Florida League of Cities where he led efforts to institute growth management in Florida. He worked in state government in Tallahassee from
1990-1998 first as program director at the Florida Center for Public Management at Florida State University, then as Executive Director of the State Taxation and Budget Reform Commission, and finally as the Intergovernmental Relations Advocate for the Department of Revenue.
Larry returned to Polk County and to his roots in higher education in 1998 when he was appointment as the third President of Polk Community College (now Polk State College) and served until his retirement in 2006. After his retirement from PCC, he served as the interim President of other Community Colleges in the country while a permanent President was selected, including Bluegrass Community College in Lexington, KY, twice at the College of the Mainland in Texas City, Texas, and twice at Owensboro Community and Technical College in
Owensboro, Kentucky.
Larry was an active member of First United Methodist Church and served in leadership roles in the church and in many civic and charitable organizations, including the Executive Committee for Polk Vision; Chairman of the Board and Campaign Chair for United Way of Central Florida; and Chairman of the Board of the Lakeland Chairman of Commerce. He was recognized for his commitment and dedication to the community and these organization with many awards, including induction into the Polk County Public Schools Hall of Fame (2008) and receipt of the Jere Annis Leadership Award presented by the Leadership Lakeland Alumni Association (2014); the George Jenkins Award presented by the Lakeland Area Chamber of Commerce (2017); and the George Jenkins Volunteer of the Year award from United Way of Central Florida.
Larry was predeceased by his father and mother and his stepmother, Iona Durrence. He is survived by his wife, Connie; two children, Jeff Durrence (Denise) and April Durrence (Kevin Jenkins); two stepchildren, Stephanie Weil (Hank) and Ralph Durrance; grandchildren, Matt Cornpropst, Elizabeth Durrence, Lydia Durrence, Marshall Durrence, Addison Brown, Brooks Brown, Bennett Brown, Mimi Brown, William Durrance, Jacob Yencho, Nick Yencho; siblings, Mary Faye Craft, Marti Stier, and Sam Durrence; and numerous nieces and nephews.
The service and celebration of Larry's life will be held at First United Methodist Church, 72
Lake Morton Drive, Lakeland, Florida at 10 a.m. on Tuesday, February 25, 2020. Prior to his death, Larry had requested that in lieu of flowers, gifts be made to First United Methodist Church for missions; to any of the following scholarships at Polk State College - Larry Durrence Allie Health/Nursing Scholarship, Durrence Family Scholarship at Philip O'Brien Elementary, Durrence Family Rising Start Scholarship at Crystal Lake Middle School, or the Hazel Haley Scholarship at Lakeland High School.
Condolences may be sent to the family at www.heathfuneralchapel.com
Published by The Ledger from Feb. 23 to Feb. 24, 2020.
To plant trees in memory, please visit the Sympathy Store.
MEMORIAL EVENTS
Feb
25
Service
10:00a.m.
First United Methodist Church
72 Lake Morton Drive, Lakeland, FL
Funeral services provided by:
Heath Funeral Chapel & Crematory
MAKE A DONATION
MEMORIES & CONDOLENCES
Sponsored by TheLedger.com.
6 Entries
Larry and I were history majors together at Florida Southern College, worked together at Hammond Electonics in Lakeland and went thru the MA and PhD program together at the University of Georgia....we and our wives cooked together, shopped together and went thru very meagre grad school times together. He was one of my most valued friends. I only learned of his passing in a Christmas card from Connie in 2020. I have only his memories now, but will always treasure those of "Big D".
Phillip E koerper
Classmate
December 31, 2020
My mother, Joanne Jaudon (deceased) worked in the testing department at FSC for many years and one of her very favorite folks was Larry Durrence! He attended her retirement party years ago there and was always so kind and caring toward her! I found myself wanting to "call" her up and let her know of Larry's passing....but....they are together in Heaven now having a grand ole talk and time. My thoughts and prayers are with all of his family and friends!
Lynne Jaudon Windham Lundeen
February 25, 2020
My condolences, Connie. You and the family are in my prayers.
Bruce Bearrentine
February 25, 2020
Hi Connie, I was sad to hear about Larry. I know that hes been sick for a long time. Please know that mine and Lauris sympathetic hearts and prayers are with you and your good family at this most difficult time. Larry was a man among men. We love you and trust that you will experience the comfort that only God can provide.
Mike Griffin
February 24, 2020

Beloved brother who will be missed
forever in heart and mind.....rest in peace.

surrounded in loving thoughts and sweet memories
Marti Noel-Stier
February 23, 2020
Larry was a friend to all and committed to his community. He will be missed.
Jim Edwards
February 23, 2020
Showing 1 - 6 of 6 results