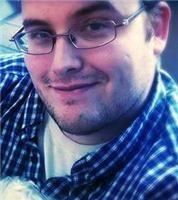 WINTER HAVEN - Stephen Merrill, 31, passes away February 12, 2015, due to a uppercut from Batman.
He was born January 28, 1984, the son of Larry Ronald Merrill and Bridgett I. Dotson Merrill. He was in retail sales at The Big Shop in Legoland, Florida.
In addition to his parents, Stephen is survived by his fiancée, Stephanie Vella; son, Noah; and sister, Kimberly.
Visitation is Tuesday, February 17, 2015, from 12-1PM with a celebration of life at 1PM, both at Ott-Laughlin Funeral Home, Winter Haven.

Published by The Ledger from Feb. 15 to Feb. 16, 2015.
To plant trees in memory, please visit the Sympathy Store.
MEMORIAL EVENTS
To offer your sympathy during this difficult time, you can now have memorial trees planted in a National Forest in memory of your loved one.
Funeral services provided by:
Ott-Laughlin Funeral Home
MAKE A DONATION
MEMORIES & CONDOLENCES
Sponsored by anonymous.
80 Entries
Still close in my thoughts...
Alicia Silkey
Friend
February 9, 2021
I just wanted to let the family know that his obit is still bringing a smile to faces in Dec 2017 where I came across it by accident thru a link with other funny obits. Thank you for honoring him this way so that he can still touch strangers lives years later and bring a smile to someone who desperately needed one today!
Connie Giesbrecht
December 20, 2017
What an appropriate send off ....God bless this family for having the courage to send this man out with a bang...love it...and God has a great sense of humor...
Iris Sistrunk
March 21, 2015
REST IN PEACE MY FRIEND
TIMELESS CREATION COMICS
March 19, 2015
Hear Ye, Hear Ye, all who knew Stephen in his mere, mortal form. He has joined with us, in a galaxy far, far away. He is using his new found super powers for the good of all mankind and will stand with us to battle and win over evil-doers. Know ye, all friends of Stephen, you will reunite with your friend in the future, on another plain of life. Be it known to all the villainous people and creatures, Stephen has bound his new life to the crusaders of Timeless Creation Comics and we will conquer over all evil!!!!
TIMELESS CREATION COMMICS Searchers
March 18, 2015
Rest in peace.
christina melendez
March 2, 2015
Thats sad to hear and im sorry to about your loss.God bless him.
christina melendez
March 2, 2015
Put out an APB on the Bat! R.I.P. Plasticgnome.
February 28, 2015
R.I.P Stephen. A brother in Comics is a brother in Heaven.
February 24, 2015
Rest in piece brother.
Matches Malone
February 24, 2015
R.I.P. Stephen, from one comic fan to another.
February 24, 2015
I honestly don't know you. Your story though hurts. I wish your family nothing but the best. I truly believe there's something better on the other side and I know you'll find peace. I send my prayers to your family.

May you rest in peace.