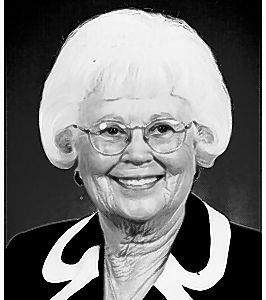 LAKELAND - Janet Grossman, 84, passed away peacefully in her sleep on February 4, 2019, at Grace Manor at Lake Morton.
Janet was born on August 27, 1934, in Plant City, Florida, to the late Guy and Bea Thompson. She grew up in Coronet and attended Plant City High School. In 1952, Janet married James W. 'Jim' Grossman. Janet accompanied Jim to various military bases during his service in the Air Force, and especially loved telling stories of their time living in Puerto Rico and Labrador, Canada. After Jim's retirement the family settled back in Plant City, where Janet worked as a bookkeeper. Upon the birth of their first grandchild, Janet retired to devote her time to her family and babysitting grandchildren.
Janet was preceded in death by her husband. Janet is survived by her son Ed Grossman, and daughter, Susan Keen, both of Lakeland. She is also survived by her grandchildren Benjamin Grossman (Tallahassee, FL), Amy Claude (Venice, FL), and Andrea Grossman (Alexandria, VA), and great-grand-son, Elias Claude.
A memorial service for Janet will be held on Sunday, February 10 at Heath Funeral Chapel in Lakeland, with visitation at 2 pm, followed by services at 3 pm.
In lieu of flowers, donations may be made in memory of Janet to the Florida Baptist Children's Home.
Condolences may be sent to the family at www.heathfuneralchapel.com