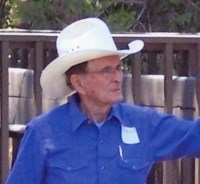 Ross Jr. was born to Ross Elmer and Maude Clarke Berlin at home in Oakland, Calif. in 1918 during the Spanish flu epidemic. He was a graduate of Foresthill Elementary and Placer Union High School's Class of 1937. He played the guitar with the orchestra and set a pole vault record on 11'4" with the bamboo pole during his high school years.
In 1938, he married his childhood sweetheart Iris Rains and they began housekeeping at Elliott Ranch cow camp and herded his father's cattle above Foresthill. World War II broke out and the family moved to Napa, CA where Ross drove truck to assist with the war effort. Eventually they settled in Sacramento, CA where Ross owned and operated two long-haul semis. He then purchased a farm in the Natomas District in the Sacramento Valley. For additional income to support his crops and growing family, he took a job with the California State Bureau of Livestock Identification as a hide and brand inspector covering three counties and several sales yards-soon after necessitating a move to Auburn, CA. The family resided there through the school years of the five older youngsters. During these years Ross dabbled with taxidermy and eventually took the plunge and went to apprentice at Jonas Brothers in CO to obtain experience with animals from all the continents. In 1970, Ross and Iris established Wildlife Taxidermy Studio and Museum in Jackson, WY. It was a dream that had become reality. For over 20 years the exhibits awed tourists and locals alike.
Ross loved the great outdoors, animals, calf roping, hunting, fishing, photography, snowmobiling, good friends and family. He celebrated an early 90th birthday and Father's Day in Foresthill with family and friends last summer. He was loved dearly and will be missed always.
He passed away at his home in Pinedale on Saturday, May, 30, 2009.
He is survived by his daughters Sherelda (Jim) McCrary, Meadow Vista, CA, Linda (Gary) Norton, So. Lake Tahoe and Paula Calhoun, Daniel, WY and sons Ross E. (Bev) Berlin, Auburn, CA, Wayne Berlin, Kingman, AZ and Dennis Berlin, Woodland CA.; 17 grandchildren and 21 great grandchildren; his sister-in-law Frances Rains; and numerous cousins, nieces and nephews. He was preceded in death by his wife Iris of 45 years; son-in-law Donnie Calhoun; and brothers George and Warren Berlin.
At the request there will be no services. A family gathering to celebrate his life is planned in the near future.
Published by Gold Country Media Newspapers on Jun. 14, 2009.
To plant trees in memory, please visit the Sympathy Store.
MEMORIAL EVENTS
To offer your sympathy during this difficult time, you can now have memorial trees planted in a National Forest in memory of your loved one.
MAKE A DONATION
MEMORIES & CONDOLENCES
2 Entries
Dear Berlin Family,
Your dad lived a long and full life, we are all blessed to have crossed paths with him. Can you imagine all the stories all the old cowpokes are swapping now, your Dad, Harvey, Cal, L.E., Ed, etc... May your memories ease the pain in your heart. Our love to you all,
Gary and Joy (White) Keeler
Joy White-Keeler
June 27, 2009
Rest easy, Ross.
Ed Presley
June 14, 2009
Showing 1 - 2 of 2 results