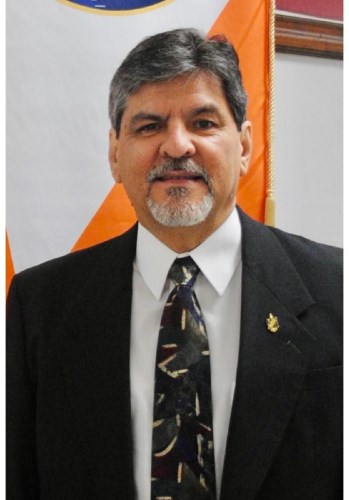 FUNERAL HOME
Rivera Funeral Home - McAllen
1901 Pecan Blvd.
McAllen, TX
Houston,Texas - Encarnación Fuentes, Jr. passed away on September 11, 2021 with his loving wife of 50 years by his side. He was born in McAllen, TX on February 24, 1949. He was a 1967 graduate of McAllen High School. He also served 6 years in the U.S. Army National Guard as a medic. He was very proud of his role in the guard and enjoyed reminding his family of that as often as possible.

While in McAllen, he worked actively as a musician, ultimately becoming one of the pioneering musicians in the South Texas Tejano music genre. As a member of Los Fabulosos 4, along with his brother, Edgar, he served as a songwriter, arranger, and performer of the classic Tejano genre. He was an exceptionally talented guitarist and producer, and enjoyed creating music in the recording studio. In the early stages of the internet, he founded Tejanoclassics.com, becoming one of the earliest online retailers to offer, restore and remaster early 60's, 70's, and 80's Tejano music, which reached grateful fans internationally. Music was his greatest passion. It is a passion that lives on in his daughters, Leticia, who is a classical violinist, mariachi musician and Orchestra teacher, and Sandra, who shares his great love of Tejano music, working with him at Tejanoclassics.com and alongside him in his music business events.

Aside from his music background, he held management positions in the corporate world, working for Phillip Morris USA in McAllen and ultimately transferring his family to Houston.

Upon raising his daughters, and retiring from Phillip Morris USA, he completed a long-held goal to finish college. He graduated as an Outstanding Student at the age of 64 from Sam Houston State University with a Bachelor of Spanish. He was a proud alumnus and Bearkat, along with his wife, Yolanda, and his daughter, Leticia, who all graduated from SHSU.

Encarnacion was a loyal fan of the Dallas Cowboys. He was happiest surrounded by his family, enjoying some beers, and making his famous barbecue chicken on the pit.

Encarnacion is preceded in death by his parents, Maria Esther and Encarnacion Fuentes, Sr., and brother, Edgar A. Fuentes.

Most importantly, he leaves behind a legacy of kindness, wisdom, understanding, inclusion, and love. His presence in our lives was the greatest gift that we could ever receive.

Memorial Mass will be held on Wednesday, September 22, 2021 at St. Joseph the Worker Church, 900 S. 23rd St. in McAllen, TX at 11:30am with interment immediately following at Valley Memorial Gardens in Mission, Tx.

Funeral arrangements are under the direction of Rivera Funeral Homes of McAllen.
Published by The Monitor on Sep. 20, 2021.
To plant trees in memory, please visit the Sympathy Store.
MEMORIAL EVENTS
Sep
21
Celebration of Life
6:30p.m.
Rivera Funeral Home - McAllen
1901 Pecan Blvd., McAllen, TX
Sep
22
Memorial Mass
11:30a.m.
St. Joseph the Worker Catholic Church
2315 Ithaca, McAllen, TX
Sep
22
Committal
1:00p.m.
Valley Memorial Gardens Cemetery, Mission, Texas
Funeral services provided by:
Rivera Funeral Home - McAllen
MAKE A DONATION
MEMORIES & CONDOLENCES
3 Entries
Sorry for your loss. May he Rest In Peace!
Eduardo Casso
School
September 28, 2021
I would like to offer my deepest condolences to the family. I wish I would have gotten the chance to know him better. Encarnacion, was my God-father. I am the daughter of Tito and Elvira Perez, Jr. I have heard many stories of the jam sessions and wish I could have heard you all singing and enjoying life. Prayers to all of the family. Condolences from Tito and Elvira Perez, Jr. As well. Much love towards the entire family.
Leslie A Bolivar
September 25, 2021
I was saddened to receive Carny's (that was his nickname when I knew him back in the 60s) obituary today thanks to a my own brother Javier who lives in Mission. I knew him well especially through his older brother Eddie, who was best man at my wedding and a lifelong friend. I remember Carny as being a very talented guitarist and singer, a great arranger for one of his early bands, which I believe was called Our Generation? I had the pleasure of playing with him for one night at the old McAllen Civic Center at a battle of the bands in maybe 1967-68 because he wanted horn backup for his arrangements. At that time I was a trombone player along with Eddie, a great trumpeter, backing up Noe Pro. Our Generation did not win the first prize that night, but I know we had a great deal of fun and I was very proud to have been of some help to Encarnacion. I also remember fondly a crazy trip I took with Eddie, Carny and his parents to, of all things, pick tomatoes in Ohio. That was the summer of 1966 and we ended up in a place called Napolean, Ohio. I never got to pick those tomatoes, but I did hoe and weed soybeans alongside the family for about a week before I found a job working at a grocery store. I also had met Yolanda, or as he lovingly called her, Yoli, and to her and am pleased they had those 50 years together. To her and her daughters I offer my deepest condolences. Rest in peace my friend.
Ricardo "Richard" Fuentes
September 20, 2021
Showing 1 - 3 of 3 results