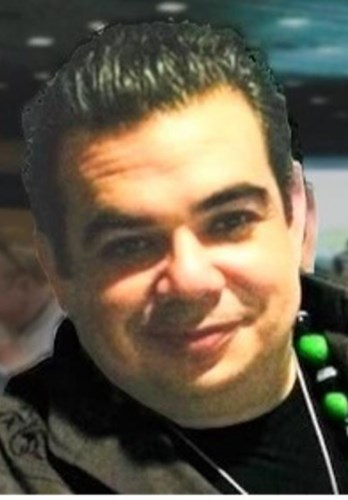 Johnny spent his final days exactly how his friends and family would have imagined. He went to a concert and relaxed on the beach in South Padre. He passed away in his sleep after spending the night laughing and enjoying the company of good friends. Born in McAllen, Johnny grew up in Pharr and graduated as a member of the PSJA class of 1988. Johnny, always in search of something greater, left to Austin and attended St. Edward's University. In Austin, he made fast and lifelong friends among his fellow Hilltoppers. He was instrumental in helping develop the Delta Sigma Pi fraternity and was chosen as their President. Johnny excelled at business and finance and graduated with a double major. He returned to South Texas eager to put his new degrees to work. A longtime member of the Lone Star National Bank family, Johnny continued to develop strong and lasting business relationships. Although he loved banking and his customers, Johnny also ventured into construction and development. He founded Onix Construction, LLC and expressed himself in the custom homes he built. He expanded his professional network by joining and being an active member of the Pharr Rotary Club, where he was well known for the levity and excitement he brought to their events. While he loved his business, it was never Johnny's pride and joy. His sons were the lights of his life. His sons Sebastian, Alek, and Alan were the driving force behind everything he did. The boys were constantly on his mind and he dedicated his free time to support them and their achievements. Anyone who knew Johnny could see that he was a devoted son. His best friend and father, Oscar Gonzalez of Pharr, enjoyed and spent many memorable days fishing, golfing, and traveling with Johnny. He also was a constant support to his late mother, Maria Minerva Gonzalez. His family finds comfort in knowing they are now reunited. His most loyal ally was his sister, Melissa Gonzalez of McAllen. The two siblings were inseparable, and their love for each other's families knew no boundaries. Johnny was a constant support and guide for his nephew Omar Romero, of McAllen, and the protector of his nieces Danielle Guitierrez and Victoria Miramontez, both of McAllen. Surrounded by his numerous cousins and relatives Johnny was always hosting a BBQ or party. His laughter and infectious happiness will be missed by his bountiful friends. Johnny's heart belonged to his partner, Patricia Ruiz, who would always be at his side supporting him and his family. The light and joy she brought into his life were felt by all those around him. Johnny was a member of Our Lady of Sorrows Catholic Church of McAllen.

Johnny is preceded in death by his mother, Minerva "Renee" Gonzalez.

Visitation will be held from 5 to 8 p.m., with a 6 p.m. rosary Thursday, July 8, 2021, at Memorial Funeral Home in San Juan. Funeral service will take place at 2 p.m. Friday, July 9, 2021, at Our Lady of Sorrows Catholic Church in McAllen. Interment will follow at Palm Valley Memorial Gardens in Pharr. His family has asked his lifelong friends Mark Aguilar, Luis Garza, Judge Jerry Muniz, Steven Salazar, Michael Sauceda, and Mario Vela to serve as his pallbearers.

Funeral services are under the direction of Memorial Funeral Home of San Juan.

Published by The Monitor on Jul. 8, 2021.
To plant trees in memory, please visit the Sympathy Store.
MEMORIAL EVENTS
Jul
8
Visitation
5:00p.m. - 8:00p.m.
Memorial Funeral Home - San Juan
311 East Expressway 83, San Juan, TX
Jul
8
Rosary
6:00p.m.
Memorial Funeral Home - San Juan
311 East Expressway 83, San Juan, TX
Jul
9
Funeral service
2:00p.m.
Our Lady of Sorrows Catholic Church
McAllen, TX
Funeral services provided by:
Memorial Funeral Home - San Juan
MAKE A DONATION
MEMORIES & CONDOLENCES
17 Entries
Our deepest condolences to the Gonzalez family. May God bless you.
Alberto and Bache Guerra (Motor Mart Machine Shop)
July 14, 2021
Our most sincerest condolences to Oscar Gonzalez and Johnny's family in these times, our prayers are with you from Joe Jimenez & family. (Distance relative )
Joe Jimenez & Family
Family
July 9, 2021
Our deepest condolences to Oscar and Melissa. We are so sorry and Heaven has gain another angel. God be with you. Rest In Peace Johnny. ( Sylvia´s Sister)
Samuel n Blanca Galvan
July 9, 2021
May God bless you and your family in this time of sorrow.
Hipolito Pruneda Jr.
July 9, 2021
Dear Oscar and Melissa. I am so sorry to hear of your loss of beloved Juan. May the concern and prayers of family and friends bring you peace. God be with you.
Bea Ramirez Vento
Friend
July 9, 2021
Mr. Gonzalez and family, My thoughts and prayers are with you during your time of sorrow. May fond memories of Johnny's free and light-hearted spirit bring you joy and peace during this difficult time. With heartfelt condolences, Zonia (Eliud & Magala's Daughter)
Zonia Treviño
July 8, 2021
Oscar, we mourn the loss of your son with you. May God bless you and your family during this time of loss and sorrow. May he rest in peace.
Mike Villarreal
Friend
July 8, 2021
Sending peace and strength to his sons and family. I´m blessed to have called Johnny my friend since his days in Austin.
Rodney Garza
Friend
July 8, 2021
My deepest condolences to the family. May God give you strength in this time of sorrow.
David Navarro
Work
July 8, 2021
My condolences go out to you and your family. I remember you fondly from high school. However, it was a pleasure working with you these last 6 years. Thank you for your help with our family business.
Mirta Ramirez-Espinola
School
July 8, 2021
I would like to express my deepest sympathy to his family. I have known Johnny for so long. Our fathers were good friends. Like his Dad if I ever needed anything all I had to do was call. We didn´t see each other or run in the same crowds I knew I could depend on him. He was funny ahead of his time and most of a good person. He would brag about his kids every time I ran into him. May God give his family strength. RIP friend! You will truly be missed.
Celia Hernandez Martinez
Friend
July 8, 2021
An awesome and friend! He loved his little dudes.. R.I.P. my dear friend! Darlene
Darlene Jamison
Friend
July 8, 2021
My sincere condolences.
Gina Sanchez
School
July 8, 2021
God speed my friend. You will be greatly missed. Love you hombre.
Ricardo A Ramirez
Friend
July 7, 2021
Condolences my friend.
Manny Escamilla
July 7, 2021
I´m so sorry to hear about your Johnny's death. Your father, son, brother and uncle was one of the kindest and most fun person that I was lucky to call a friend. I´ll miss him, too.
Annette Chavez Alvarado
School
July 7, 2021
You have my deepest condolences. Johnny was larger than life and will be forever missed. He meant the world to me. I hope the memories of your father, brother and son comfort you always.
Sylvia Cavazos-Malamon
Friend
July 7, 2021
Showing 1 - 17 of 17 results