Elon Jack "E.J." Potter, age 71, of Ithaca, MI, passed away Monday, April 30, 2012, at Rosewood Adult Foster Care, Gratiot County, MI.
A Memorial Service will be held at Smith Family Funeral Homes Ithaca Chapel Ithaca, MI on Sunday, May 6, 2012 at 3 p.m., with Pastor Tom Huff officiating. Visitation will be held on Saturday, May 5, 2012 from 4 to 8 p.m. and on Sunday, May 6, 2012 from 2 p.m. until the time of service, at the funeral home.
Elon was born in Alma, Michigan on April 24, 1941, the son of Howard and Sheila (Huxley) Potter. E.J. graduated from Ithaca High School with the class of 1959.
With his extremely vast knowledge and love of machinery, E.J. could be described as a self-made mechanical engineer. A true machine innovator, inventor, and racing legend, E.J. was probably best known, across this country and abroad, for his series of home made Chevy V-8 drag bikes. As an exhibitionist drag strip performer, he was commonly known as the "MICHIGAN MADMAN", during the rise of his career in the 1960's and into the early 1970's. It was at that time, he made several historic runs on his bikes, which he called "Widowmaker" and "Bloody Mary". E.J. became a record setter with his machines, including a 1973 entry into the Guinness Book of World Records. Following his drag racing adventures, he then became involved in the tractor pulling arena. Here, he soon became a leader in the sport, with his talents and abilities and love for the Allison aircraft engine. Many others came to him for advice, maintenance, repairs and sales of their aircraft tractor engines and jet engines. He won countless awards for his successful runs, including "World Champion" title two years in a row. E.J. was self taught in all areas of interest, with a constant desire to learn more. His favorite way to learn was usually trial and error. In later years, he further developed and marketed his earlier creation, the snow melter machine, which he named "Michigan Melters". E.J. was inducted into the Michigan Motor Sports Hall of Fame in 1992, for holding his many racing and tractor pulling records.
He is survived by son, Jack and Deborah Potter of Howell, MI; daughter, Alison (Potter) and David Tiihonen of Howell, MI; grandchildren, William, Jennifer, Jacob, and Emily; and three sisters.
In lieu of flowers, memorials may be made to Rosewood Adult Foster Care. Online condolences can be sent to www.smithfamilyfuneralhomes.com The family is being served by Smith Family Funeral Homes Ithaca Chapel Ithaca, Michigan.
Published by The Morning Sun from May 2 to May 3, 2012.
To plant trees in memory, please visit the Sympathy Store.
MEMORIAL EVENTS
To offer your sympathy during this difficult time, you can now have memorial trees planted in a National Forest in memory of your loved one.
MAKE A DONATION
MEMORIES & CONDOLENCES
30 Entries
Here some links you can buy a Book full of Photos of bikes and Tractors plus a DVD.
https://duckduckgo.com/?q=ej+potter+michigan+madman&atb=v157-1&ia=videos

https://themichiganmadman.com/
Mark Hayward
Acquaintance
April 28, 2019
In the 60s one of the german Motorrad calendars had a picture of Michigan Madman Mr.Potter. Smoking the tire and his 8 cylinder bike all sideways,thinking about it puts a smile and now also a tear on my face. R.I.P. you are a TRUE HERO OF MOTORSPORTS! Your GERMAN fan Herbert Jahn
Herbert Jahn
April 10, 2013
Grew up following E.J @ the Saline & Monroe pulls-What a sad loss. Having been blessed by E.J's teachings-in recent time's, met Pat Somerville(who went to school with E.J.& family)--truly whole hearted & great.
I had the great honor to cross paths with E.J. @ Ithica Burger King for lunch in 2009--What a value of time to have shared!! Thank you, Johnny Cat
john kremkow
February 10, 2013
Saw him run in NY back in the late 60s. He was truly one of a kind and seeing him perform was something that made a lasting impression. RIP, EJ
Don Cunningham
July 10, 2012
never saw you run but always knew who you were you will forever be missed. way ahead of your time GOD BIESS YOY E J POTTER
bill weir
June 12, 2012
hell of a man, never be forgotten
bill weir
June 10, 2012
I rode EJ's last bike the Widowmaker number 7 for years during the 90s. He was my hero and he always gave me advise on racing the bike that I will always remember. His picture is on my wall as his memory will be in my mine. Leroy J Williams
Leroy Williams
June 2, 2012
I had the honor of meeting E.J. at thompson raceway park. in thompson, ohio while helping him unload his bike from his chevy pick up. He was an amazing person to talk to if you were a motor head. Most interesting person i ever meant period! James Loveland s.r.
James (jim) Loveland
June 1, 2012
I am 51 years old. I never saw E.J.'s Drag bikes run. I remember him from Tractor pulling. E.J. Was my Hero, I saw him take first and second place many times. I remember one time at the St Joseph County Fair Grounds he put his tractor tires on backwards and still won. The track was damp and sticky with great traction. I think he did it just to blow peoples minds. I think the good traction was great for the high torque of the Allison V-12's. I think Double Ugly was a rear V-24. I always wanted to look him up in Ithaca MI. I didn't know until reading his Obituaries how approachable he was.
I would have loved to speak with him and learn about his creations.
I hope to purchase his book and videos if I can find out where to find them.
Mark Hayward
May 22, 2012
Sad loss of a true legend, the likes of which won't be seen again.
Condolences to his family.
Steve Bailey
May 15, 2012
I first met E.J. while attending Alma College (Alma, MI) in the early 1960's & was lucky to have withnessed some of his earliest efforts with the Chevy powered motorcycle. His lifelong passion for mechanical creativity & execution was simply incredable.
Joseph Cox
May 9, 2012
E.J. left an indelible impression on me and inspired me to live my life as a mechanic and practical engineer. Godspeed E. J., Steve DeGroote
Steve DeGroote
May 8, 2012
America has lost a true modern day folk hero. A self taught, multi talented, one of a kind that can never be replaced. He was a man of the calibre that America and the world needs now more than ever. He will be sadly missed but hopefully the madness will live on and infect many others, such madness is needed for the inspiration of all. My sympathies and best wishes go to his family and friends.
Keep it nailed to the stop E.J.
Robert. E. Stannard
May 8, 2012
A true legend of mythical proportions within the motorcycle and drag racing communities. There will never be another Michigan Madman. RIP/GodSpeed
Mike Hutton
May 8, 2012
Sorry to here about EJ's passing Im in Australia and he made quite an impression on me when he came to Sydney's Castlereigh Drags in the 70,s and I just woke up this morning thinking about seeing this mad man on this V8 cycle though I'd look him up on the net and learned about His passing all my condolences to family "What a blast" he made on so may people.... Thankyou Fred Watts Melbourne Victoria Australia
Fred Watts
May 6, 2012
Thanks for all of the good memories E.J, you truly marched to your own band... and everyone loved it.
May God bless...hope to see you on the other side.
Matt West
May 6, 2012
I remember many good times as a child with E.J. on the farm.
Dan Holdeman
May 6, 2012
The loss of a great man in many ways. I would loved to had met him. I have always admired his achievements from afar, (Australia) my thoughts are with his family Kelvin Jobling
Kelvin Jobling
May 5, 2012
Best wishes to the family of E.j. Potter. It must have been an interesting ride.
Charles E. (Ted) Skinner
May 5, 2012
God speed EJ, you were one of a kind.
Mark Zimmerman
Danbury Ct.
May 5, 2012
rest in peace Sir! Wow man, Wow! To hang off of one of those bikes, dropped off of the stand at 6000 RPM. Never Lift! Many people say it, but You Mr. Potter, really , trully never "lifted". See you on the other side I hope.
Brent Vendsel
May 5, 2012
I will always remember going to the Monroe County Fair to see E.J. Potter pull. He was surely a dare devil at heart. What a great man and the memories of many to have and to share. Thoughts and prayers are with your family with the great loss.
Julie MacKenzie
May 4, 2012
Although i had never met you, i read just a bit of what seems like a great lifetime affair with all things mechanical. The world has lost a great sportsman. andy huggins Farmington mo
andy huggins
May 4, 2012
dragracehalloffame.com will be inducting E J,A true american Harry the hat (jupiter fl)
harry laplatte
May 4, 2012 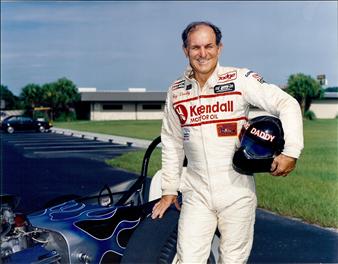 Don Garlits
May 3, 2012
On behalf of our entire Board of Directors, we extend our sincere sympathies and condolences to the entire family. May the Michigan Madman rest in peace...

Daniel S. Van Koevering, President, Michigan Motorsports Hall of Fame www.mmshof.org
Dan Van Koevering
May 3, 2012
I remember my brother taking me to the Calhoun County, MI. fair for the tractor pulls. EJ would be tinkering with Ugly Alice getting ready for his next run. He always had time to talk and share his knowledge.
Jay Dobbins
May 2, 2012
R.I.P. EJ! I'll always remember going with you to the tractor pulls. It was fun to watch the fan's reactions after watching you win with the "Ugly Tractor". The Bloody Mary will be your legacy. Now you're racing in a better place. Prayers and condolences go out to the family.
Cyndi Fortney/Roslund
May 2, 2012
EJ was a tremendous inspiration to me and was a great source of knowledge. He was one of a kind and will be missed.
RIP (Race in Peace)
Pat Davidson
May 2, 2012
Always enjoyed watching E.J. perform at drag strip in McBride, Michigan
Nick Nedry
May 2, 2012
Showing 1 - 30 of 30 results