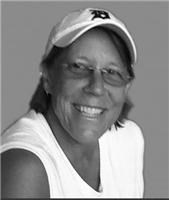 Janice Marie "Ziggy" Zygmontowicz, age 56, of Mt. Pleasant passed away peacefully in her home on December 3, 2013, after a courageous battle with ovarian cancer.
She was born to the late Edward and Agnes Zygmontowicz on January 18, 1957 in Detroit and moved to mid-Michigan to attend Central Michigan University.
Ziggy was an outstanding athlete her entire life and was inducted into the CMU Sports Hall of Fame in 2011 with the 1976 Field Hockey team. Her career (1975-78) on the field hockey team included 4 varsity letters, AIAW State and Regional titles in both 1975 and 1976, along with AIAW National Tournament appearances in both years. She also played softball for CMU for two years.
After a 19-year career as an electrician at CMU, Ziggy earned her master's degree in counseling and was employed by the Farwell School District for 5 years. She continued to work in the mental health profession as an outpatient therapist at Community Mental Health for Central Michigan.
Ziggy's greatest love was her family. She is survived by her wife of 13 years, Renee Babcock; her children, Ryan and Bryce Kantak of Midland, Anna Babcock of Philadelphia, and Katja Babcock of Mt. Pleasant; three sisters, Jennifer (Stephen) Bouwkamp of Florida, Doreen (Bruce) Lindh of Florida, and Cindy Zygmontowicz of Midland; and her faithful dog, Spirit.
A Memorial Service for Ziggy will be held at St. John's Episcopal Church on Saturday, December 7, 2013 at 10 a.m. with Fr. Wayne Nicholson officiating. The family will receive friends one hour prior to the time of the service. Those wishing to make a memorial donation in Janice's name are asked to consider the American Cancer Society or Woodland Hospice. Envelopes will be available at Clark Family Funeral Chapel and St. John's Episcopal Church.
You may view Ziggy's obituary online and send a condolence to the family, light a memorial candle, or place a memorial donation at
www.clarkfuneralchapel.com
Published by The Morning Sun from Dec. 3 to Dec. 4, 2013.
To plant trees in memory, please visit the Sympathy Store.
MEMORIAL EVENTS
To offer your sympathy during this difficult time, you can now have memorial trees planted in a National Forest in memory of your loved one.
Funeral services provided by:
Clark Family Funeral Chapel & Cremation Service
MAKE A DONATION
Please consider a donation as requested by the family.
MEMORIES & CONDOLENCES
13 Entries
Rest peacefully Ziggy! You and your family are in our thoughts and prayers.

Much love and hugs

Shocked and saddened to hear of Ziggy's passing. Our thoughts and prayers are with you during this difficult time.

Stephanie & Megan Green
December 3, 2013
I met Ziggy when she was counseling at Farwell Schools. She started the Yellow Ribbon program, a suicide prevention program and she was a great advocate for kids. I am so sad to hear she is gone. I feel so fortunate to have known her.
Pamela Sook
December 3, 2013
I met Ziggy in Oscoda a few times sharing a bonfire. I really enjoyed her spirit. Love and prayers to you and your loved ones.
Lynn Bitterman
December 3, 2013
ZIGGY, I had the pleasure of working with you for 16 of the 19 years you worked at CMU. You were one of the better ones to work with. I will miss you. RIP
John Jenerou
December 3, 2013
Sending Prayers of comfort for all!
Jim & Donna Fearn
December 3, 2013
Your courageous battle has inspired many... Your smile and sense of humor will be missed by all... I'm glad our paths crossed my friend... Diana
Diana Mizer
December 3, 2013
Showing 1 - 13 of 13 results