BORN
1921
DIED
2012
FUNERAL HOME
Rowley Funeral Home
330 South University
Mt. Pleasant, MI
Waldo Sauter, age 90 of Mt. Pleasant, Michigan, died on Wednesday, February 22, 2012 at McLaren-Central Michigan. Dr. Sauter was born on April 7, 1921 in Wellsboro, Indiana, the second son of Olga (Porter) and Frank Sauter. Dr. Sauter was a long time educator, and taught in Indiana high schools and Murray State University in Murray, Kentucky before joining Central Michigan University in 1957. While at CMU he served in the capacities of Professor of Physical Education and Sport, Coordinator of their graduate program, assistant athletic coach in football, basketball and baseball and head baseball coach. In September of 1994 he was elected to the Central Michigan University Athletic Hall of Fame. He was a long-time member of The American Association of Health, Physical Education, Recreation and Dance; the Michigan Association of Health, Physical Education, Recreation and Dance; and Phi Epsilon Kappa, National Professional Fraternity in Physical Education. He was primarily responsible for the chapter of Phi Epsilon Kappa being established on the CMU campus, and was faculty advisor of this chapter (Beta Delta) for twenty six years. In April of 2000, Dr. Sauter was presented with Phi Epsilon Kappa's most prestigious award, the Honor Award. Dr. Sauter was also a charter member of the Central Michigan University's chapter of Phi Delta Kappa, a graduate fraternity in Education. He retired from the University in 1986.
Dr. Sauter graduated from Ball State University in 1947, and held Master's and Doctoral degrees from Indiana University. He was an avid baseball fan and player, and played briefly in the St. Louis Cardinals farm system. Locally he played and managed with the Rosebush semi-pro team and the Mt. Pleasant Green Sox team. He was also an active member of the Michigan Sport Sages, served on their Board of Directors, and served as State President of this organization in 1998. He was an active member of Rotary International and the Mt. Pleasant Chapter. He served in the United States Army in World War II, in both the European Theatre and the Pacific Theatre of operations. He was discharged as a 1st Lieutenant.
Dr. Sauter was preceded in death by his parents, three brothers, Earl, Richard, Glen, who died as an infant and his son-in-law Bruce Henderson. He is survived by his wife, Judy, whom he married in LaPorte, Indiana in 1950; two daughters, Michele (Ronald) Hoeksema of Galesburg, Michigan, Robin Henderson and adopted daughter, Char Hone both of Salt Lake City, Utah. Five grandsons: Matthew, Joseph and William Henderson of Salt Lake City, Utah and Tyler and Benjamin Hoeksema and a granddaughter Hadlee Hoeksema, all of Galesburg, Michigan. Also four great grandchildren: Sadie, Audrey, Scottie and Silas, all of Salt Lake City, Utah.
In following Dr. Sauter's wishes, his body has been willed to the Michigan State University School of Medicine. Memorial services celebrating Dr. Sauter's life will be held on Tuesday, February 28, 2012 at 11 a.m. from the First Presbyterian Church with Pastor Andrew L. Miller officiating. Friends will gather with the family from 10-11a.m. at the church. Military Honor Guard Services honoring Dr. Sauter will be will be provided by the Borley-Hanel VFW Post 3033 and the American Legion Post 110. Friends may remember Dr. Sauter with a memorial to Food With Friends at the Commission on Aging or The First Presbyterian Church Memorial Fund. Envelopes will be available on the day of the service at the church or at Rowley Funeral Home in Mt. Pleasant.
Please share your thoughts and memories with the family at the funeral home, the church or through www.rowleyfuneralhome.com. 'Honoring Traditions, Respecting Change'
To plant trees in memory, please visit our Sympathy Store.
Published by The Morning Sun from Feb. 23 to Feb. 24, 2012.
MEMORIAL EVENTS
No memorial events are currently scheduled.
To offer your sympathy during this difficult time, you can now have memorial trees planted in a National Forest in memory of your loved one.
Funeral services provided by:
Rowley Funeral Home
MEMORIES & CONDOLENCES
22 Entries
Coach was a tough , no nonsense kind of guy. I had him for a class or two back in the mid 70's at CMU. Sorry to hear he's gone.
Randy Neumeyer
Student
June 6, 2020
My sincere condolences to the family of Coach Sauter. Among his many activities, he spent summers in Mt. Pleasant coaching Colt League baseball. I felt privileged to play two summers for him. All of us learned so much baseball from him and had a tremendous respect for him as a person! As well, we had a championship team.

Chuck Grisdale
February 25, 2013
I was so sorry to hear about Waldo!! he was a darling man and will be greatly missed! To all of his family, you were so lucky to have him in your life and to learn from him!! I so enjoyed my conversations with him. Wish we had been able to have many more. My condolences to all!
Love& peace,
Lynn & kids!!!
March 6, 2012
Judy, Robin , Michele and families...we were saddened to hear of Waldo's death. Please know you are all in our thoughts and prayers at this time.
David, Sue and Ashley Adams
March 3, 2012
Dr. Waldo Sauter will be missed by those who played for him and received his instruction in physical education. Furthermore, I played baseball with Dr. Sauter in the summers while attending CMU on the Mt. Pleasant Green Socks team

My condolences to the Sauter family.

I had the highest regard for Dr. Sauter.

Gary R. Apsey, PhD Freeland, Michigan
February 29, 2012
As the days and weeks pass, and as you return to life's routine, may you continue to feel comforted by the love and support of family and friends.
Sherry VonDoloski
February 28, 2012
My condolences to the Sauter family....I remember Mr. Sauter as a wonderful man who was very supportive of the athletic endeavors of his daughters and their friends.
Lydia Westbrook
February 26, 2012
I feel so honored to have had the chance to meet and feel close to old papa. My heart goes out to your entire family. I will forever hold your close to my heart. I know you are smiling down upon your family watching over them.
Jen Nelson
February 26, 2012
There is not a day that goes by when teaching physical education that Dr. Sauter doesn't enter our thoughts. Above all Waldo taught us what it means to be a Physical Educator and not a "gym" teacher. You are loved and will be missed. - Steve and Lisa Babbitt
Steve and Lisa Babbitt
February 25, 2012
Robin I'm sorry for the loss of your father. You are in my thoughts.
Robin Lovejoy
February 25, 2012
My heartfelt condolences to the Sauter family. Rest in peace, Waldo.
Al Freund
February 25, 2012
Dear Aunt Judy and Michele and Robin I very sorry for your lose your in my thoughts and pryers I love you all. Hilary Draves ( Portage,MI)
Hilary Draves
February 25, 2012
I don't believe I was one of Coach's favorite players but he was always very professional in our meetings. I learned a lot about baseball and respect for my coaches and fellow players. He was a top notch coach and I was proud to be on his team. I'll see you in heaven Coach. "Bear" Fogle
February 24, 2012
Dear Judy:

My condolences to you and your family You are in my thoughts abd prayers.
Genevieve Swindlehurst
February 24, 2012
I had three classes from Dr. Sauter at CMU. He was efficient in his presentations and got his point across. Our best to his family and our thoughts and prayers are with you.
Tim Kennedyh
February 24, 2012
Our condolences to the entire Sauter family.
We did not know Waldo well but had met him and Judy and know they were special people. Michele and her family were special to us. Love and Prayers to all. Jim and Elaine Brininstool
February 24, 2012
Judy, Robin, and Michelle, I am so sorry for your Loss..May Waldo R.I.P. and may the time of grief be lessend knowing our Lord has taken him home.
Julie Rhodes
February 24, 2012 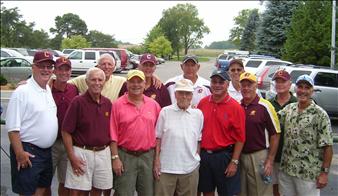 Coach was a true Professional in everything he did. He was always striving for perfection on the baseball field or in the classroom. He was a tremendous competitor and left no stone unturned when preparing us for competition or life. Winning was not everything, but the effort to be prepared and perform at your best every time you took the field or your profession was with Coach.
When I returned to coach at CMU in 1990 it was great to have him help out and stop by the office and talk about life. Each year when I return to Mt Pleasant I looked forward to meeting with Coach over lunch or at events that we may attend together. I will surly miss those times, but never will I forget COACH!
My thoughts and prayers go out to Judy and his family. May God's blessing be with you during this trying time.
Jim Fuller
February 24, 2012
Dear Judy and Family, sorry for your loss. Waldo had a great impact of many ex-players, students, and community members. I am one of many that played baseball for him and was a student. Many of his words and lessons still ring true and clear in my mind and behavior. Best wishes, Dr. Gary W. Arbogast, '72
February 24, 2012
Rob & family, I am so sorry for your loss. He was a wonderful man. You were lucky to have him in your lives.
Much love,
Jane Rupp
February 24, 2012
I was honored to be your daughter......you are my example for my own life......R.I.P. Daddy!!! Loving you today, as always...."Cowboy dude....it's your turn to ride......". rob
Robin Henderson
February 23, 2012
Our condolences, I always enjoyed seeing Waldo come into Kmart. Going to miss him. He was always full of joy. Randy Russell. Greeter of Kmart
February 23, 2012
Showing 1 - 22 of 22 results