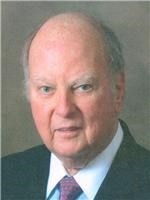 FUNERAL HOME
Lake Lawn Metairie Funeral Home
5100 PONTCHARTRAIN BLVD
New Orleans, LA
Henry Bernis Alsobrook, Jr., age 85 years, passed away on Friday, November 13, 2015 in Mandeville, LA. Mr. Alsobrook was a graduate of New Orleans Academy. He completed his undergraduate studies at Tulane University where he was a member of the Delta Kappa Epsilon Fraternity and earned his Juris Doctorate from Tulane Law School. He served his country in the US Navy during the Korean Conflict. He was a former Attorney and Managing Partner for Adams & Reese, LLP. A Former President of the Louisiana Bar Association 1982-1983 and a member and former President of the International Association of Defense Counsel. He was a beloved member of the Louisiana Club, Pickwick Club, Lakeshore Club, Avoca Duck Club, and numerous carnival associations. Member of the Tastevin de Chevalliers and former Grand Cellerie of the Commenderie d' Amerique. Mr. Alsobrook is preceded in death by his parents, Dr. Henry Bernis Alsobrook, Sr. and Ethel Smith Alsobrook; his son, Henry Bernis Alsobrook, III; his nephew, Harold James Miller, III. Beloved father of Eugenie Alsobrook Burglass (Harry), Emily Alsobrook Kayton (Bradley), and John Gleason Alsobrook (Cheri). Grandfather of Patrick Woodward Burglass, Stephen Pool Burglass, Henry Bernis Alsobrook, II, William Robert Alsobrook, Carolyn Camille Alsobrook, Eugenie Paige Alsobrook, Geoffrey Leonidas Kayton, and Brady Alexander Kayton. Brother of Dr. Jane Alsobrook Miller. Uncle of William Henry Miller, Gordon Wilson, Peter Wilson, Carter Wilson, and Alice ""Bonnie"" Wilson. Cousin of Robert Alsobrook. He will be deeply missed by his children, family, friends, the legal community and organizations in which he was involved. Relatives and friends of the family are invited to attend the funeral services at St. Charles Ave. Presbyterian Church, 1545 State St., New Orleans, LA on Thursday, November 19, 2015 at 3:00 PM. Visitation will be held at church from 1:30 PM to 3:00 PM. Interment will be private in Metairie Cemetery. In lieu of flowers, please consider a donation in honor of Mr. Alsobrook to either St. Charles Ave. Presbyterian Church or HUGS through Adams & Reese, LLP are preferred. To view and sign the family guestbook, please visit www.lakelawnmetairie.com.
Published by The New Orleans Advocate from Nov. 15 to Nov. 19, 2015.
To plant trees in memory, please visit the Sympathy Store.
MEMORIAL EVENTS
To offer your sympathy during this difficult time, you can now have memorial trees planted in a National Forest in memory of your loved one.
Funeral services provided by:
Lake Lawn Metairie Funeral Home
MAKE A DONATION
MEMORIES & CONDOLENCES
30 Entries
May God bless you and your family in this time of sorrow.
JF
December 16, 2015
What wonderful times we spent together laughing and sharing stories - he will always be in my thoughts...
Ric Smith
November 25, 2015
Dear Alsobrook Family,

I had the pleasure of being a student of Bernie and also worked on several cases with him, on the same or opposite side. He was a fine lawyer and teacher and I enjoyed getting to know him. He was an important member of the Bar. The loss of Bernie must be hard on you. My heartfelt condolences and strength!

Conny Willems
November 24, 2015
Eugenie, Emily and John, my thoughts are with you all. I adored your father and loved having dinner with him in San Francisco when he was there on business or to visit with Emily. Such wonderful memories. Will be missed but never forgotten.
November 22, 2015
howard lester
November 21, 2015
We are so sorry to hear about the loss of this great man. I have gifts in my home from Bernis and a large plant he gave to us when we first moved to our home. I learned so much about wine and food from him. Carrie Du Bois and Family
November 21, 2015
I am so sorry to hear of Bernie's passing. Unfortunately I did hear about his passing or I would have been there. i will pray for Bernie and John and Emily . Louis Wilson
November 19, 2015
Condolences & prayers to you & your family, Eugenie. I am so sorry to hear of your loss.
Avery Burglass Charvet
Avery Charvet
November 19, 2015
Sorry for the loss of your dear loved one! Our loving heavenly Father knows your pain and He really cares for you! We can look forward to the time when 'Death will be no more neither will mourning nor outcry nor Pain be anymore! The former things have passed away!' Much love!
Dea
November 19, 2015
I regret that I will not be able to attend the funeral today, but wanted to offer condolonces on behalf of the staff at Heritage Manor of Mandeville. It was a pleasure caring for Mr. Alsobrook.
Rhonda Vahle
November 19, 2015
Mr. Alsobrook will be sorely missed by all who knew him. May your dear family find comfort and hope at this time. (Psalm 10:17, 18)
Aaron Nettles
November 19, 2015
I met Mr. Alsobrook a couple of times in Baton Rouge. He is an intelligent man and excellent attorney. May Eugenie, John, and Emily be proud of his life's accomplishments.
My Sympathies,
Erin Early Belleau of N.O.
resides in Baton Rouge
November 18, 2015
Condolences to the family
Jane m Gisevius
November 18, 2015
Eugenie, Emily, & John, I'm so sorry for your loss and so sad to hear this news. Bernie was always fun and welcoming when I would come over to visit. My heart is heavy and I am with y'all in spirit! Much love, Karen
Karen Morrow
November 18, 2015
Condolences to the family,
Our prayers and thoughts are with you, it is never easy to lose a loved one who is so dear to your heart, May you draw comfort from God, who will sustain you and give you peace. 2 Corn 1: 3, 4
November 18, 2015
Please call me "Bernie" although I could barely bring myself to do it. He was always "Mr. Alsobrook" to me and very deserving of all respect. He was always a kind man and such a gentleman, very sweet and generous. Prayers to you, John, and to your family.
Glenda Bartley
November 18, 2015
Please accept my heartfelt sympathy for the loss of your loved one. May reflecting on all the good times you've shared together help ease the pain that you now feel. Also may "the God of all comfort "strengthen you during this time of sadness, and may His promise for the future bring you peace.
Hosea 13:14.
November 18, 2015
I learned a lot from working with Bernie. He was very good to me. My condolences to his family. Hang in there, John.
Jeff Bennett
November 17, 2015
Eugenie, Emily and John I was so sorry to hear of your father's passing. I just sent him a birthday email on the 9th. I worked as your dad's billing secretary for 8 years and I can honestly say I never had a more generous, compassionate and intelligent boss as your dad. I learned so much from him and I know he will definitely be remembered and missed in all of the legal communities. Cheryl L. Michel (retired)
Cheryl Michel
November 17, 2015
RIP Sir.
November 17, 2015
You cannot buy class. He was a true example of just that. He will be remembered by many. His shuffling feet will forever be heard through the hallways of A&R. Prayers to his entire family.
Jessica Ione Reid
November 17, 2015
I had the pleasure of working with Bernie for years. He was a great soul. There will never be another "Bernie" and will be greatly missed.
Barbie Edwards
November 17, 2015
Lots of Prayers and Blessings to Mr. Alsobrook's Family. He was an amazing and very generous man. I had many incredible experiences working with him at Adams & Reese. Never a dull moment. I will never forget him, and he will always be in my prayers.
Alice Ponseti
November 16, 2015
Eugenie, Emily & John, I was so very sorry to hear of Bernie's passing. He was truly a joy to work for & I know how very special each of you were to him & how much he loved ya'll. I am so sorry that I can't be with ya'll on Thursday & hope each of you can remember all the love & wonderful memories each of you have of him & his for each of you! His former secretary, Gretchen
Gretchen Bulloch
November 16, 2015
OFFERING PRAYERS FOR A FALLEN SAILOR.
Barry Jarreau
November 16, 2015
What a loss, Bernie was a wonderful man. Everyone that knew him will miss him. I will keep all the family in my prayers as I always do.
Beth Burglass
November 16, 2015
What a loss, Bernie was a wonderful man. Everyone that knew him will miss him. I will keep all the family in my prayers as I always do.
November 16, 2015
I'm Sorry to hear about your loss
Judy Ross
November 16, 2015
John: our deepest condolences to you and your family. God bless.
~Windi & Cedric Smith
Windi Smith
November 16, 2015
So sorry for your loss. I worked with Mr. Alsobrook at Adams & Reese. He was always kind to me. I hope you find peace in all of the happiest of moments you shared with him.
Carol Lopez Short
November 16, 2015
Showing 1 - 30 of 30 results