FUNERAL HOME
Lake Lawn Metairie Funeral Home
5100 PONTCHARTRAIN BLVD
New Orleans, LA
LTC Robert Leon Wilkie Sr., US Army retired, 79, of Owens Cross Roads, Alabama, passed away on Wednesday, May 3, 2017. He was born in Monroe, Louisiana on March 15, 1938 to the late Harl Sutton and Gladys Inez Gamble Wilkie. He met and married the love of his life, Joy Somerville Wilkie on October 22, 1961. LTC Wilkie is survived by his wife of 55 years, Joy Somerville Wilkie; son, Robert Leon Wilkie; daughter, Dana Wilkie Laskey; mother-in-law, Marie Somerville; five grandsons; two granddaughters and several nieces and nephews. He was preceded in death by his parents; brother, Charles William "Bill" Wilkie; father-in-law, Abram Douglas Somerville; son, Douglas Charles Wilkie. LTC Wilkie's education included Merrick Grade School, Saint Aloysius Catholic High School, Loyola University where he received a BS in History, MS in Business, MS in Adult Education, a MS in Computer Science and a DBA in Business Administration. He was a member of the Sigma Alpha Kappa Fraternity. His military training included the following courses: Artillery School at Fort Sill, Artillery Basic and Advanced Courses, Airborne Course at Fort Benning, Ranger Course at Fort Benning, 8 inch Nuclear War Head assembly Course at Oberramagu, FRG, Chemical, Biological and Radiological Warfare Defense Course at Vilseck, FRG, US Army Command and General Staff College at Fort Leavenworth, Joint Command and General Staff College at Norfolk and US Air Force War College at Maxwell Air Force Base. His military service included the European Theater during the Cold War. He commanded Washington's Artillery Battery in New Orleans and 1st Battalion (Airborne) 320th Field Artillery Battalion. He lived up to the Battalion motto, "Willing and able." He served as an Instructor at Fort Sill. He volunteered and served in the War in Vietnam where he was wounded three times. There as an Advisor he supported RVN Forces, Australian Brigade, Seiks and Gurkus Forces. He served as an Exchange Officer in the United Kingdom attached to the United States Embassy. His last assignment was Chief of Staff US Army Reserve Manage Region at Fort Knox. LTC Wilkie received numerous decorations during his military career to include the following: Distinguished Flying Cross, Soldiers Medal (3 awards), Bronze Star (4 Awards-1 for Valor-3 for Service), Air Medal (4 Awards), Purple Heart (3 Awards), Meritorious Service Medal, Army Commendation Medal, Combat Infantry Badge, Senior Parachutist Badge, Ranger Tab, British Parachutist and Vietnamese Cross of Gallantry (3 awards). Areas of specialty included Field Artillery Officer, Intelligence Officer, Joint Planning Officer, Nuclear Biological and Chemical Deployment Officer, Level One Qualified Instructor, Senior Parachutist and Army Ranger. After retirement, he continued to serve the defense sector, managing the Space and Missile Defense Conference and as a member of the National Defense Industrial Association Board of Directors. He also was a member of the Military Order of World Wars (MOWW), member of the Madison County Hall of Heroes, member of the North Alabama Veterans and Fraternal Organizations Coalition (NAVFOC). Along with his patriotic service to the men and women of our Armed Forces, LTC Wilkie served our country as a member of the Republican Party Executive Committee, Election Poll Watcher and an advisor to political groups and elected officials. Visitation will be held on Friday, May 12, 2017 at Lake Lawn Metairie Funeral Home beginning at 12:00 noon, followed by a Funeral Mass at 1:00 pm, with Father Billy O'Riordan officiating. Entombment, with full military honors to follow in Lake Lawn Cemetery. In lieu of flowers, the family asks donations be made to Huntsville-Madison County Veterans Memorial Foundation, PO Box 16030, Huntsville, AL 35802 in his memory. Please sign his guest registry at www.lakelawnmetairie.com and/or www.valhallafunerals.com. A Memorial Service honoring LTC Robert Wilkie will be held in Huntsville at a later date.
Published by The New Orleans Advocate from May 9 to May 12, 2017.
To plant trees in memory, please visit the Sympathy Store.
MEMORIAL EVENTS
To offer your sympathy during this difficult time, you can now have memorial trees planted in a National Forest in memory of your loved one.
Funeral services provided by:
Lake Lawn Metairie Funeral Home
MAKE A DONATION
MEMORIES & CONDOLENCES
13 Entries
joy - trying to reach you to say hi. It's been a while since Ft. Bragg, NC - you knew me as Charleen Letsen - we worked together and went to NYCity together!! You introduced me to Elizabeth Arden!!!!
char porter
Friend
May 18, 2018

June 16, 2017
I just learned of the passing of LTC Wilkie and was saddened by this news. I had the good fortune to know Capt (at the time) Wilkie when he served with the 1st Battalion 83rd Artillery in Vietnam in 1966-67. He was a good man and a good officer and was really a soldier's soldier.

At our unit Reunion's a fond memory of Capt Wilkie is always brought up by one of us.

On behalf of myself and the entire the 1/83rd Artillery Association, I want to offer our deepest condolences to the family of Capt Wilkie. He will be in our prayers and will always be a brother to us all.
Lest We Forget.
Bill Taggart
Military
June 16, 2017
Bob Wilkie was one of the finest men I've ever had the privilege of knowing. His patriotism was inspirational, and his intelligence and kindness was as great as his love of country and family. He will be missed by many, not the least, by me. Love to you, Joy, and to your children. God bless this man!
Jacque Reeves
May 29, 2017
To the family, you have my sincerest condolences. I had only known Mr. Wilkie and the family for a year, working for his mother -n-law, that's how i got to know Mr. Wilkie and his wife Joy. I bonded with them almost instantly. I enjoyed hearing all his jokes and his war stories, he always had a smile on his face. He loved when i would make coffee for him. Wilk i wished i could have had the opportunity to make you 1 last cup of coffee. It was an honor and privilege to have known you. Thank you for serving our country, you will be deeply missed and forever loved....
Faye Taylor
May 16, 2017
Dear Joy,I'm sorry I won't be able to attend Bob's services. He is in my prayers and masses. I know this is a very difficult time for you and your family and I ask the Lord to watch over you and give you the grace you need at this time. God bless, Sandra

Sandra Rowan
Friend
May 12, 2017
As a veteran of the US Navy I was so impressed by Roberts service to our country as stated in his obituary even though I never knew him I wanted to thank him & his family for his selfless dedication to our country
John Rome
May 10, 2017 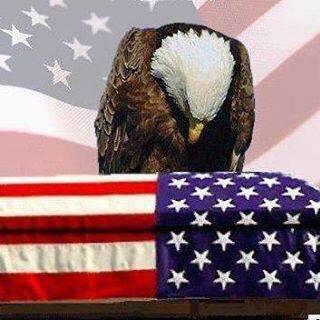 Day is done.
Gone the sun.
From the lakes
From the hills.
From the sky.
All is well.
Safely rest.
God is nigh.

Fading light.
Dims the sight.
And a star.
Gems the sky.
Gleaming bright.
From afar.
Drawing nigh.
Falls the night.

Thanks and praise.
For our days.
Neath the sun
Neath the stars.
Neath the sky
As we go.
This we know.
God is nigh
COL (Ret) Calvin & Jan Washispack
May 10, 2017 It's the Soldier,
not the pastor/preacher, who has given us freedom of religion and worship.

It's the Soldier,
not the reporter, who has given us freedom of the press.

It's the Soldier,
not the poet, who has given us freedom of speech.

It's the Soldier,
not the campus organizer, who has given us freedom to assemble and demonstrate.

It's the Soldier,
not the lawyer, who has given us the right to a fair trial.

ETERNAL REST GRANT HIM O LORD, AND LET PERPETUAL LIGHT SHINE UPON HIM.
COL (Ret) Calvin & Jan Washispack
May 10, 2017
May you Rest In Peace knowing how well you served your country and loved your family. I will remember our times at Loyola and SAK
Delosa Young MD
May 9, 2017
Joy I am sorry to hear of Wilkie's passing. I lost my husband three years ago and it hits your heart like a rock. I pray that God will send His Spirit for peace and comfort as He has for me and my family.
God bless
Ann Ford Maggio.
Ann Maggio (Ford)
May 7, 2017
Bob, a soldiers soldier has faded away. Your historical rhetoric will be missed. Your epistles comparing history with current military tactics will never be duplicated. RIP my SAK brother. Wes Schuyler
May 5, 2017
May God's loving kindness and comfort help you and your family through this very sad time Psalms 29:11
May 4, 2017
Showing 1 - 13 of 13 results