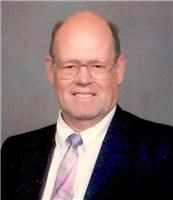 He was a native of Hardin County and retired from Gates Rubber Company. He was a member of Severns Valley Baptist Church where he also was a member of the senior choir. He was a 1955 Rineyville High School graduate and a member of Lincoln Trail Antique Power Tractor Club. He drove a school bus for Hardin County Schools for 13 years. He was a man of God who loved his church, his family and all of his many friends.

Visitation is from noon to 8 p.m. Sunday at Brown Funeral Home in Elizabethtown and continues at 9 a.m. Monday at the church.

Expressions of sympathy may take the form of donations to Hosparus.
To plant trees in memory, please visit our Sympathy Store.
Published by The News-Enterprise from Jun. 21 to Jun. 24, 2013.
MEMORIAL EVENTS
No memorial events are currently scheduled.
To offer your sympathy during this difficult time, you can now have memorial trees planted in a National Forest in memory of your loved one.
Funeral services provided by:
Brown Funeral Home
MEMORIES & CONDOLENCES
12 Entries
Brenda, So sorry to hear about Don. I played softball against him for many years. We live in FL now & I don't check obits here much. Prayers be with you. Gene Klinglesmith
June 28, 2013
I went to school with Don and am sorry to hear this. I will keep you all in my prayers. Barbara Adams Miller
June 26, 2013
I'm so sorry to hear this. He was such a sweet man
Michelle Ross
June 25, 2013
To all the family, Want you to know that you are in our thoughts & prayers. God Bless.
Bro. Mike Williams
June 23, 2013
Brenda, so sorry about Don. He was a fine Christian man. Will miss him in bible study class every Sunday. You and the family are in are prayers. God bless! Lou and Wilma knott
June 22, 2013
So sorry for your loss. He was a fine man.God bless all the family. Prayers are with you.
Bill Whalen
June 22, 2013
We are sorry to learn of Don's death. He was one great guy. We recall his furnishing the sheep for the Living Christmas Tree at SVBC. May you feel God's comforting presence.
Bert & Sylvia Daugherty
June 22, 2013
So sorry for your loss. I always enjoyed seeing Don weather it was driving a bus for the county or at Severns Valley. He will be missed greatly.
jane embry
June 22, 2013
Brenda: My prayers are with you and your family in Don's home-going. He'll be missed in senior adult choir.
Janice Highbaugh
June 22, 2013
Brenda, how I do understand your sense of loss. Because of my 'indirect' connection not only with the 'Gates' family because of R.T., but also with our Severns Valley church family, I extend heartfelt sympathy.
Joan Knight
June 22, 2013
Brenda and family, I have considered Don one of my closest and dearest friends for many years. I will miss him. Enjoyed singing with him in our regular choir for many years and in the Senior Adult Choir in recent years. He is a fine example of a Christian Gentleman. My prayers are with you all.
Charleen Westrope
June 21, 2013
Condolences to the family of the passing of Don. Have not seen Don for years but worked at Gates Rubber Co and Don was always nice and friendly to me.
Elaine Hollan
June 21, 2013
Showing 1 - 12 of 12 results