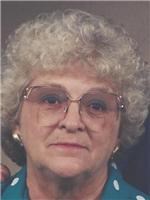 She was preceded in death by a son; Silver William Campbell III, and a significant other, Joseph Conyers.

The funeral is at 2 p.m. Tuesday, Dec. 30, 2014, in the chapel of Coffey & Chism Funeral Home in Vine Grove with Brother Jerry Bell officiating.

Visitation is from noon to 2 p.m. Tuesday at the funeral home.

Condolences may be expressed at www.coffeyandchism.com
Published by The News-Enterprise from Dec. 28 to Dec. 29, 2014.
To plant trees in memory, please visit our Sympathy Store.
MEMORIAL EVENTS
To offer your sympathy during this difficult time, you can now have memorial trees planted in a National Forest in memory of your loved one.
Funeral services provided by:
Chism Family Funeral Home
MAKE A DONATION
MEMORIES & CONDOLENCES
1 Entry
Our Deepest Sympathy from Lula Farmer and family.
Lula Farmer
December 29, 2014
Showing 1 - 1 of 1 results