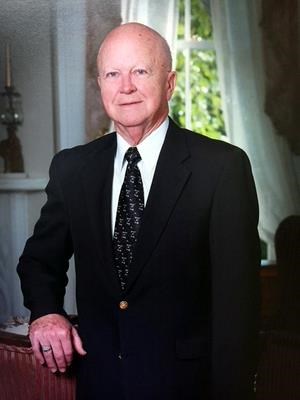 George was born and raised in Conway, Arkansas, and at only eighteen years of age began his service for the United States Army in Korea. Following his return home, he continued his education at the University of Central Arkansas, formerly Arkansas State Teacher's College. These milestones served as the foundation for many of his most admired and beloved qualities. George gleaned his familial and faith-based values from his loved ones in Conway; he maintained military values such as a respect for authority, order, and standing with a tall and broad stance; and his education gave him the knowledge and vision necessary for a successful future career in banking.

George later met his wife, Shirley in New Orleans, Louisiana, when he served as the first male to move into the previously all female boarding house where she resided. George and Shirley fell in love and married approximately six months later, on July 7, 1953. The couple made many moves together, endured changes in career paths, raised three beautiful children, and provided a loving and inviting sense of "home" to whomever walked through their doors. Over the period of their nearly sixty-six-year long union, these two modeled what a faithful and loving marriage ought to look like for their children, grandchildren, great-grandchildren, and many others.

George began his banking career in 1959 at the First State Bank of Conway. In 1965, he began a nearly ten-year affiliation with Southern National Bank in Tallulah, Louisiana, where he served in various capacities, including Vice President and Cashier.

In 1974, George was approached by a group of businessmen and community leaders from the Franklin Parish area interested in formation of a new bank, Progressive State Bank, which would serve the financial needs of area residents - the first new bank in the Franklin Parish area in seventy-five years. Under his leadership, Progressive Bank grew to nearly $160 million in assets, five locations in Winnsboro, Monroe, and West Monroe (having expanded to Ouachita Parish in 1997), a nationally recognized online banking system, and seventeen ATM locations at the time of his retirement from active service. During his tenure, Progressive Bank also established departments and divisions not usually found in a community bank, including Wealth Management, Mortgage Lending, and Commercial Cash Management.

While he devoted much time and effort to the success of Progressive Bank, he managed to find time to be an actively-involved member of many community organizations. He was truly devoted to the Winnsboro community, his beloved second home, having served in many leadership roles including as President of the Winnsboro/Franklin Parish Chamber of Commerce. He was instrumental in the creation of the Winnsboro Economic Development Foundation and served as its President for several years, as well as a member of its Board of Directors. Mr. Cummings was also an active supporter of the Boy Scouts of America, working with countless young men over many years as a merit badge counselor for scouts working toward achievement of the rank of Eagle Scout. One of his greatest joys was seeing the excitement of children of all ages when they came to see the Cummings' annual Christmas display. He was also an active member of First Baptist Church, Winnsboro, where he served as a deacon for many years.

This loss will leave a hole in the strong and diverse family George created, and he will be greatly missed. Although the memories recounted by his spouse, children and grandchildren are too great to number, they will often share about times spent with their "Dad," "Pawpaw," "Poppy," or "Grandpa." He showed love and taught many lessons over a shared a bowl of ice cream, taking rides in his little red wagon, or when creating a sense of magic at Christmas with his beautiful light display. George looked forward to the day he would meet his Savior and friend, Jesus Christ, in heaven. He passed from this earth peacefully and surrounded by his loving family. In that moment he taught a final, but vitally important lesson: That when one knows Christ, death is not a reality to be feared, but a joyful celebration of a life well-lived.

Funeral services for Mr. Cummings are planned for 11:00 a.m. on Thursday, May 23, 2019, at First Baptist Church, 502 Highland Street, in Winnsboro. Visitation will be from 9:30 a.m. until 11:00 a.m. on Thursday, and Interment will follow the service at the Northeast Louisiana Veterans Cemetery in Rayville. All arrangements are under the direction of Mulhearn Funeral Home in Winnsboro.

Contributions in George's memory may be made to the American Cancer Society.

Published by The News Star on May 22, 2019.
To plant trees in memory, please visit the Sympathy Store.
MEMORIAL EVENTS
May
23
Visitation
9:30a.m. - 11:00a.m.
First Baptist Church
502 Highland Street, Winnsboro, LA
May
23
Funeral service
11:00a.m.
First Baptist Church
502 Highland Street, Winnsboro, LA
Funeral services provided by:
Mulhearn Funeral Home Inc
MAKE A DONATION
Please consider a donation as requested by the family.
MEMORIES & CONDOLENCES
Sponsored by Mulhearn Funeral Home Inc.
1 Entry
My deepest condolences to the family and friends of George Cummings Jr. May treasured memories of your loved one and the loving provision from the God of all comfort bring you hope and solace. (John 3:16)
May 21, 2019
Showing 1 - 1 of 1 results